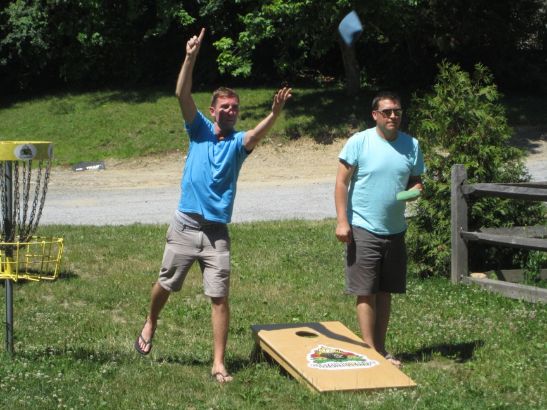 And So Fourth and So On

The holiday weekend initially looked like a washout, but Mother Nature rallied and served up a couple picture-perfect days for deserving revelers. Many of them are squeezing in some recreational activity—cornhole, bocce, beer sampling—on the Captain Lawrence patio before the long weekend comes to an end.

Brad Orr of Brooklyn and Mike and Marissa Madonia of Ardsley are enjoying a spirited game of Hong Kong Poker. “It’s similar to A**hole,” says Brad of that card game centered around getting rid of your cards–and doing humiliating things to the player still stuck with theirs. “Only nobody makes anybody drink.” 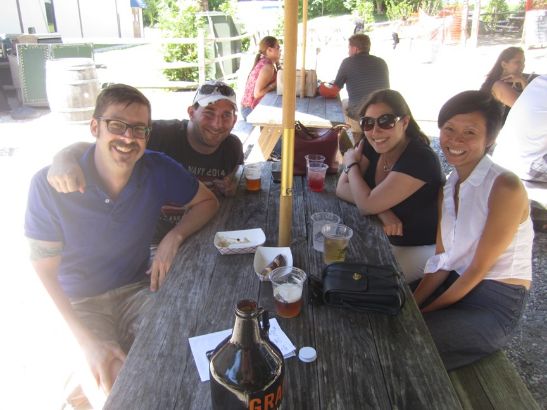 Their pal Victoria Yang comes back with fresh samples of Sippa, a mellow summer IPA out of the pilot batch system, while it’s cranberry juice for the expecting Marissa. The Madonias spent the first part of the weekend in Mystic. Brad is pleased to get out of the city to enjoy craft beers, along with some tasty Vietnamese banh mi and good old American pulled pork from the Village Dog stand, out in the sun.

“Miserable,” he says with a smile. “Just miserable.”

A young couple with a baby throws a blanket down in the grass and picnics. A few more dogs show up, their owners in tow. A two-on-two game of cornhole heats up. 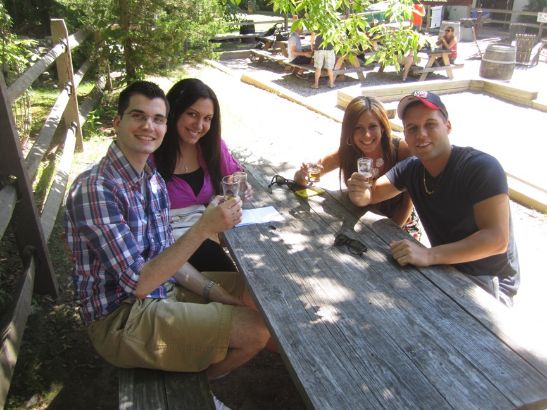 Elsewhere on the patio, Anthony Stoddard of Stony Point, girlfriend Gina Celenza, Gina’s sister Christina, also of Stony Point, and George “Buy a Vowel” Eoanou of Fairfield, Connecticut are relaxing over beers and quips. Anthony is a frequent visitor to Captain Lawrence, typically leaving with a growler of Imperial IPA.

“I don’t know why—my taste buds just love it,” he says, offering up one of the most honest beer descriptions you’ll ever hear.

“He refuses to drink anything else,” says Gina.

George quaffs the Freshchester Pale Ale, the sisters Celenza sip the India Pale Ale, and Anthony of course does them one better with the Imperial IPA–as if the table has hit for the hops cycle.

Anthony sports a Red Sox hat that is a bit incongruous with his New York accent. His grandfather played a few games for the Brooklyn Dodgers, he says, before wrecking his knee and joining the NYPD. Grandpa despised the Yankees and passed it down like a family heirloom. To Anthony, it means rooting for the Yankees’ biggest rival. 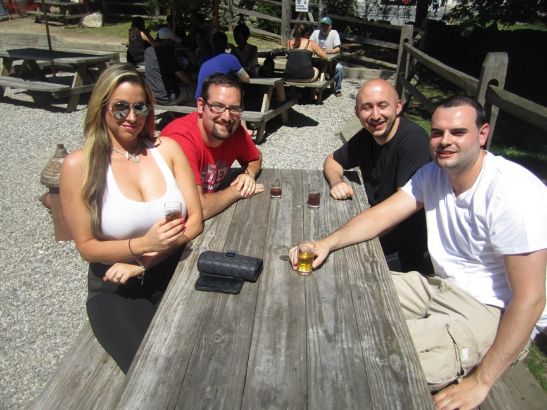 Another foursome has just completed the brewery tour and is relaxing over samples of the copper-colored, 100% Brettanomyces yeast brew known as Red Herring. “It’s not heavy, it’s not light, it’s refreshing,” says Michelle Schoonmaker of New Paltz.

She’s sharing a table with Greg Lesser of Dobbs Ferry (Greg 1) and Greg Hasapis (Greg 2) and Nick Palega of Beacon. Greg 1 is asked what he likes about the Red Herring. “I don’t remember,” he japes. “Guess I’ll have to get another.”

They’re fans of brewery tours, and Greg 1 notes that Captain Lawrence is the first place he’s been to where the staff crank out their own small batch beers, such as the Sippa and the Sleepy Time Saison.

The approach to the brewery—call it industrial eyesore chic–was “weird”, says Greg 2, but everything that came after has been a hit. “This is a good tasting room environment,” he says. “We just enjoy it.”

Meanwhile, inside the tasting room, Charlie Menendez of White Plains is enjoying quality time with his family. If anyone deserves a relaxing Fourth of July weekend, it’s Charlie, back from a two year stint fighting in Afghanistan. He’s digging the Red Herring. “Usually I’m an IPA guy,” he says. “This is a sweet twist on an IPA.” 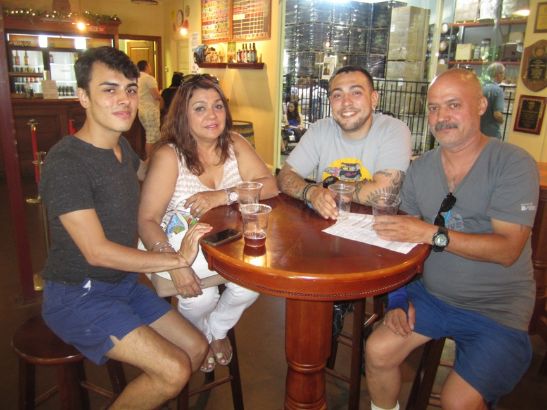 Charlie is with his mother, Luz Mary, his brother, Christian Lasso, and his stepfather, Peter Gonzalez. Luz Mary is from Colombia, and the family rabidly watched Colombia’s World Cup campaign, which ended a few days earlier in a bruising match with Brazil. “I barely cried in Afghanistan,” says Charlie. “But that was…emotional.”

Luz Mary is emotional too, tearing up when Charlie speaks of phone calls from Afghanistan with his mom that were cut short when the bombing started. But that is all behind him now.

“We haven’t had many Fourth of Julys together—it’s always nice,” the proud veteran says. “Beer, barbecue, relax with family…that’s it.”