I have resisted since I took over this column writing about restaurants in the city, as they don’t quite fit with the Lower Hudson Vally vibe.  But sometimes, you take a trip into the city, and you need to know where to eat there, right?

I know, you’ve probably heard of this restaurant before- as far as vegan restaurants go, it’s pretty famous.

Or maybe you’ve been in the frozen foods sections of one of our local Whole Foods stores, and seen the Candle Cafe frozen meals, made by the same people.

Candle 79 is the more upscale restaurant of the group, on the Upper East Side.  Candle Cafe, their sister restaurants located on the Upper East and Upper West Sides are their more casual counterparts.  The menus are different at all three restaurants, but there are some similarities.  I actually haven’t been to the cafés, so I can’t speak to them, but I can tell you that Candle 79 is out of this world!

I’ve been a few times, and unlike my usually style of finding one dish I like and ordering it over and over again, I have a made an effort to try different item each time.  I’ve not been disappointed by anything yet!

At Candle 79, dinner always starts with an amuse bouche. 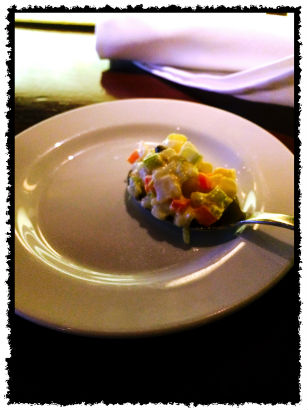 This one is potato salad, but it varies by the day.  Always nice to start off with a little something!

This is the exception of something that I have ordered more than once, and I have no regrets.  Onion rings.  I know, you don’t usually go to an upscale restaurant to get a fast food staple, but it’s pretty hard to find onion rings that are made without egg.  And these are phenomenal! 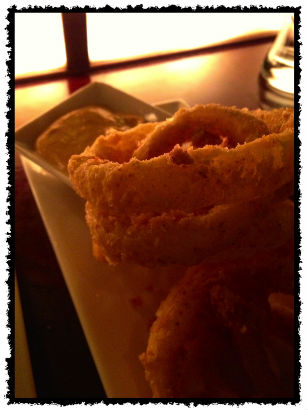 I apologize for the shoddy pictures- the lighting at dinner time is very dim.  You will have to go for yourself to see how good the food really looks!

I held off on ordering this entree for the longest time, and I don’t know why.  It’s probably one of the dishes that Candle 79 is known best for: Seitan Piccata. 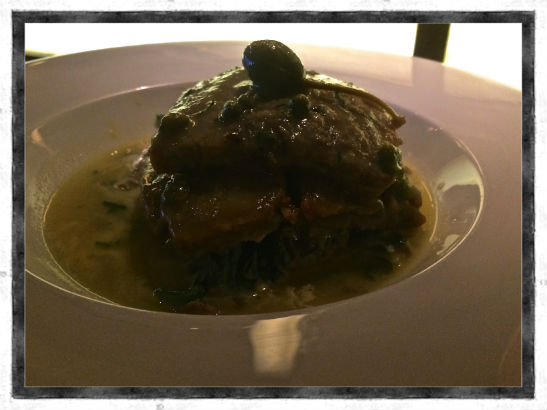 Again, the picture doesn’t do it justice, so please allow me to explain.  You know what seitan is, right?  It’s made from wheat, where the flour is washed until only the gluten remains, and then it’s kneaded and usually simmered in a flavorful liquid, creating what looks like meat, with a chewy texture.  You’ve probably seen it at stores like Mrs. Green’s or Whole Foods, and perhaps even tried it, unless of course you are gluten free.

I have never made seitan that tastes quite like this, and I own the Candle 79 cookbook and have followed the recipe to the letter.  I’ve taken a whole cooking class just about seitan, and still can’t make it like this.  I do not know what it is that they do, but their seitan is in a class by itself.  It has been a very long time since I have eaten meat, but I think if you gave this plate to a meat eater, they would not pick up on the fact that they were eating something plant based.  It has a crispy, chewy feel to it that is very meat like.  There are some meat substitutes that I have tried I don’t care for because of the similarity to meat, but not so here.  It’s not just how it’s prepared in the piccata, either.  It’s like this in other seitan dishes that they serve as well.

What they make it with tends to vary with the season, so it may not be quite the same every time you go, but I promise, it will always be good.

I just can’t say enough good things about this dish.

Actually, here’s one more: I hate mushrooms.  But this has mushrooms and I liked them.  That is high praise. 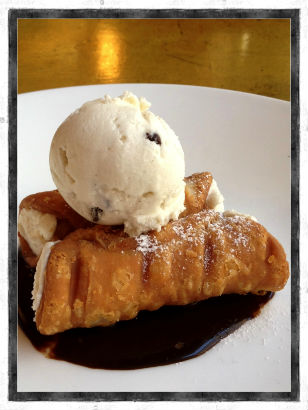 I always order dessert when I go.  This picture is better because it’s from a time I had lunch there, but it’s also my favorite.  I keep ordering something different, and it’s always good, but this is awesome!  Vegan cannoli with vegan chocolate chip ice cream.  And of course, they make all of their ice cream in house.

If you go, you should probably make reservations.  If not, you may be able to eat at the bar.  It’s less crowded at lunch, and the menu is different- you can check out a lunch meal that I’ve had at Candle 79 here.   Many of their foods are raw and/or gluten free as well. I just really happen to like gluten.