People are reading
You are at:Home»Restaurants»Openings»Sushi Thai, Tarrytown: New on the Dining Scene 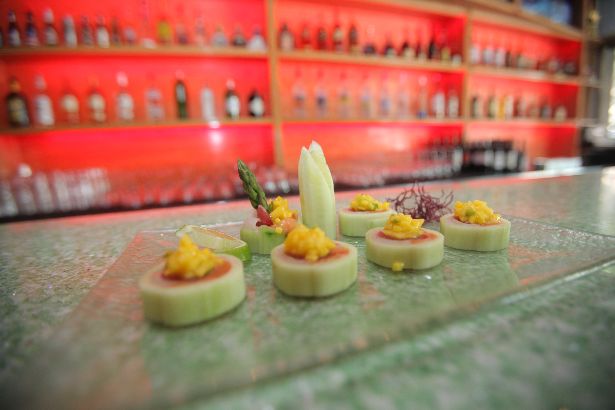 The much beloved Caravela space in Tarrytown has a sleek new tenant: Sushi Thai, an Asian restaurant owned by Tommy Zheng of Okinawa in Ossining.

The sushi chef — Tommy’s brother, Henry Zheng — worked at Sushi Samba, and says he likes to riff on the classics. “I try to make different sushi; it’s a new style,” says Henry. “When people think of sushi, they think rolls, nigiri, sashimi…I make some different kinds, like maybe mix something French style, or make a different kind of sauce, so people can taste something different — it’s not only soy sauce or wasabi, you know?” 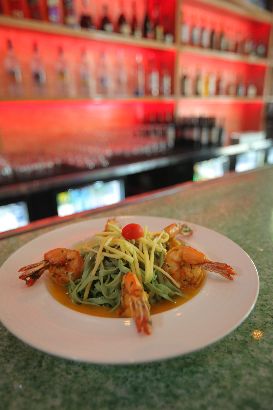 The small restaurant seats about 64 people, plus more on the sidewalk patio. Golden fabric-like waves adorn a wall of booths; across, a stacked-stone wall with onyx columns is lined by a leather banquette. The bar is topped with sparkly green stone and fronted in translucent white onyx with green LED light shining through. The sushi bar features the same white onyx, as well as a color-changing LED light behind a piece of another wave-like white wall art.

The bar features the usual wines and beers alongside a creative cocktail menu (try the Sushi Thai Breeze, a fruity cocktail that combines pinot noir with sour apple, mango, lychee liqueur, triple sec, lime juice, and a splash of 7UP). The large sake list is helpfully divided into “Light and Smooth,” “Rich Style,” and “Fragrant” varieties.