In the last few years, I have found something unexpected I love about summer: roasted tomatoes.

I’ve been someone who will pick the tomatoes off of a sandwich, lay them to the side of a salad.  I wouldn’t eat chunky salsa or tomato sauce.  I just could not find anything I liked about them

My own blog- it’s The Picky Vegan.  Because I am so picky, and tomatoes are one of those things that I have always been picky about.  For a long time, I avoided the as much as possible.  I would eat tomato sauce (smooth, of course) and ketchup, but that was it.

When I first went vegan, I started challenging myself to eat veggies and fruits that I didn’t like so much before.  I tackled a bunch, and there some I’m still trying to like (mushrooms, I’m looking at you), but it turned out that tomatoes were not so hard.

I’m not saying that I love all tomatoes.  Most of the time I’ll still pick them off of a sandwich, and they have to be pretty exceptional for me to eat in a salad, but I love, love, love the little tomatoes when they’re roasted with a little olive oil. 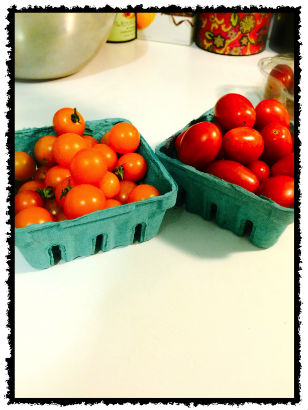 The process is simple.  Wash the tomatoes, lay them out on a baking sheet, drizzle with a little olive oil, sprinkle a little salt, toss them around they they’re all coated, and them pop into a 400F oven for about 20 minutes.  You’re looking for them to pop open and get a little bit brown.  The sweetness of the tomatoes will shine! 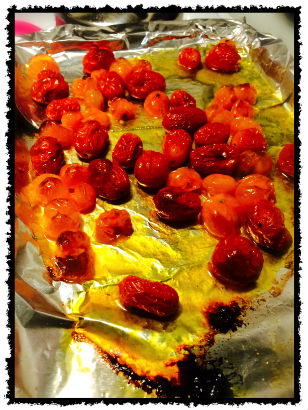 I know, it’s odd that my favorite preparation of a summer food is to roast it, necessitating the oven, but with the mild weather we’ve been having it’s not so bad.  I might one day try this in the slow cooker, but I’m definitely afraid of messing up a good thing!

My favorite way to eat these is over pasta with pesto and a little vegan cheese mixed in, but I think it would be equally good on a nice crusty bread, topping off couscous or another grain, or even on salad.   I usually use grape tomatoes, but cherry tomatoes work just as well. 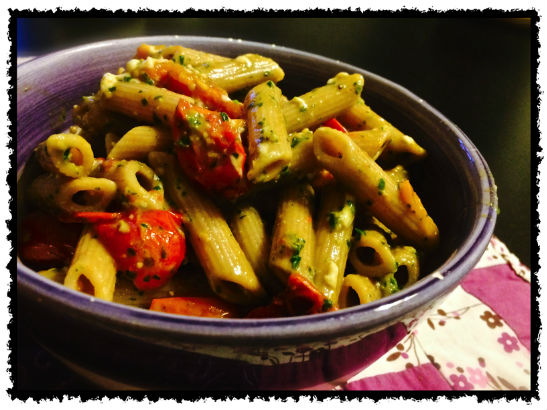 This is so easy to make- please make sure you head over to a farmer’s market and grab some tomatoes!  You have try this treat while summer is still full of deliciously sweet tomatoes!

the picky vegan tomatoes vegan Vegetarian
Share. Twitter Facebook Google+ Pinterest LinkedIn Tumblr Email
Previous ArticleNew on the Dining Scene: P.F. Chang’s in Rockland County
Next Article Where Do You Go for the Best Bacon, Egg and Cheese Around?