May Prohibition Be Perpetually Prohibited 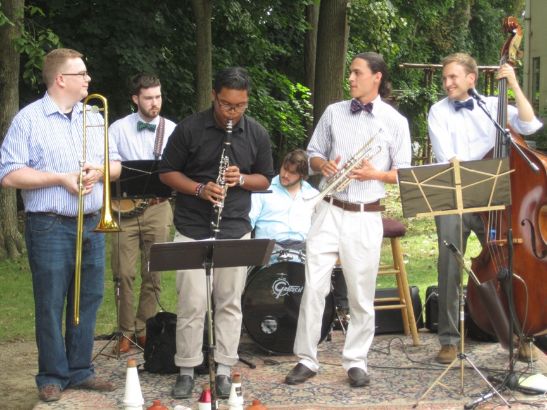 “This next song is appropriate for a brewery,” says the bow-tied singer. “It’s about Prohibition.”

The Dixieland band—upright bass, banjo, clarinet, trumpet, drums, lots of bow ties—kicks into a ragtime number on the Captain Lawrence patio that features the frightful phrase “No more beer.”

In fact, there’s plenty of beer in the garden—summer favorites like the Kolsch and the Liquid Gold, good-any-timers like the India Pale Ale, special small batches like Scott Tobin’s Whole Hop imperial IPA, brewed with whole warrior hops.

Curt and Sally Schade of Irvington popped in after a stop at ANS Seafood in Elmsford. Curt is from Dusseldorf, Germany—“where dark beer comes from,” he says proudly, and Sally is from England. She’s not a big beer drinker, but finds the India Pale Ale “quite tasty.” 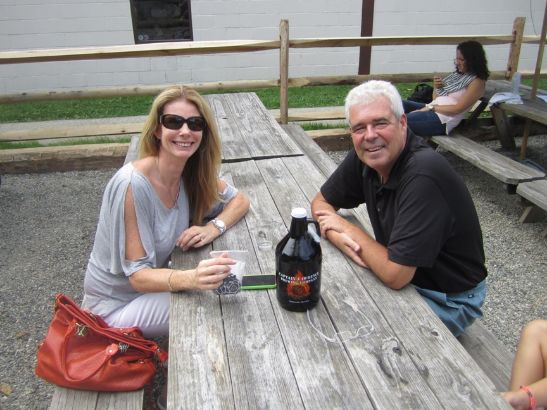 Curt, on the other hand, is all in. He flashes a stash of chips that a Vegas gambler would envy. “There’s more in the car,” he says. “I could have a party.”

They’re enjoying a few beers, and the timeless tones of the aptly named band, Bottoms Up. “It’s nice to see so many families here,” says Sally.

Singer Buddy Griffith, of Carmel, introduces a new tune while leaning on his upright bass. “That’s a huge guitar!” comments a young girl.

“Here’s another beer song,” says Buddy. “We like the beer songs.”

The band kicks in. It’s Mumford meets O Brother Where Art Thou? It’s the perfect accompaniment to an otherwise gray Saturday. 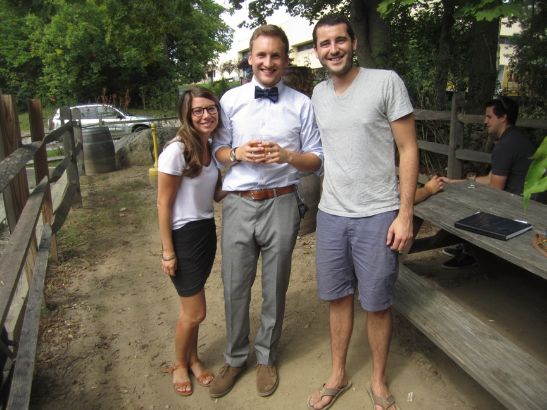 Jamie Scheurich and Sean McDermott of Tarrytown have their hound Pip in tow. Elmsford will always hold a special place in their hearts; they adopted Pip, and all the great expectations that come from rescue dogs, from Pets Alive down the road on Rte 9A. They already had a rescue cat named Oliver, and stuck with the Dickensian theme for the name.

“We come here pretty frequently,” says Sean. “First off, it’s the quality of the beer.”

They also came for the music. Turns out Sean’s sister is married to Buddy Griffith, who’s a fan of local Westchester beer. “All of his Christmas gifts are Captain Lawrence-related,” says Sean.

The expanded patio fills up as the sun tries to break through the clouds. The 2 p.m. tour starts. Pizzas fly out of the oven. Bocce balls buzz by. The band plays on.

Curt Schade goes inside to fill up his growler; the choice is the Captain’s Reserve Imperial IPA, weighing in at a big and bold 9% ABV. “The one with the good stuff in it,” he says happily.

For Kate and Allen Beers of Rye, the good stuff is pumpkin. “I’m absolutely happy about it being available,” says Kate of the Pumpkin Ale. 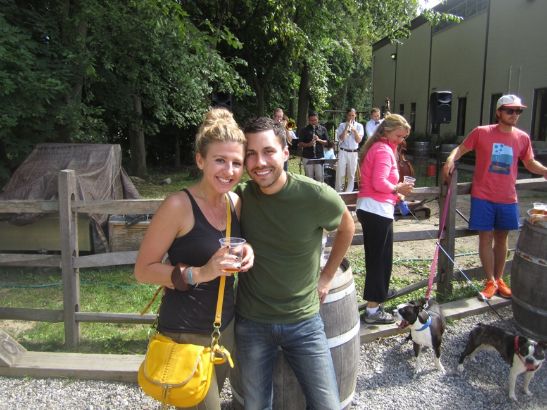 Some bemoan the presence of Pumpkin Ale, brewed with natural pumpkin puree and spices, with a chunk of summer still remaining. But Kate notes that the fickle east coast weather—there’s a peculiarly autumnal bite to the air today—makes the Pumpkin right for most any season.

Plus, Allen notes, the Captain Lawrence Pumpkin isn’t quite as pumpkin-y as other pumpkin brews.

The Beers’s dig their beers’s—and the offbeat music. “It’s a lot better than a singer-songwriter playing the same old covers,” says Allen.

As the song chugs to a close, it’s time for Bottoms Up to take a break; all these songs about beer presumably have made the musicians thirsty for one. Buddy says much of the band met at SUNY Fredonia, where he studied classical bass. “I was introduced to people playing this style of music,” he says. “I got into it, and just love playing it.”

His Captain Lawrence brew of choice is the crisp, German-style Kolsch, which he describes as “nice, easy, can’t go wrong.”

Sort of sums up a lazy Saturday at the brewery.