People are reading
You are at:Home»Recipes»Appetizers»I Eat Plants: Zucchini Time

Zucchini is plentiful right now.  If you have a garden, I bet you have some, or its cousin summer squash!

Also, did you know that zucchini is actually a fruit, not a vegetable?   I guess I did, but I never really thought about it!

Last week I was on vacation to see my family on Cape Cod.  I’ve been writing about the trip and all the vegan offerings over on my blog, as part of VeganMoFo.  My mom has a little garden, and always grows zucchini.  (I unfortunately live in an apartment without outdoor space and east facing windows only, so my own gardening is pretty limited).

I took some zucchini and summer squash home with me, and was left with what to do with it.  During my vacation time, I also caught up with some of the chef competition shows on Hulu, and I saw mention of “zucchini fritters.”  I didn’t get a good look at them, but a google search gave me a pretty good idea of what they were. 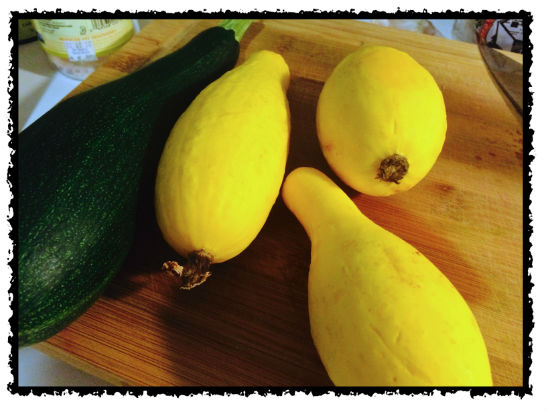 I didn’t use quite all of this, but the recipe is very flexible if you want to make more!

The ones that I at least thought that I saw on TV appeared to be a different shape, but mine turned out to be similar to the root vegetable latkes that I’ve made before.

Ground flax seed mixed with water and left to stand for about five minutes before using works great as a binder in many recipes (alternatively, if you tried to scramble it, you would be very disappointed). This is my preferred binder in recipes that I want crispy or chewy- I never make vegan brownies without it!  1 Tbs of ground flax to 3 Tbs of water does the trick.  Several recipes that I looked at that used actual eggs also included cornstarch, which also works well as a binder, so I included something similar as well (tapioca starch, because I had it handy; you could certainly use corn starch in place).

My fritters did not come out quite as crispy as I would have liked; this was because I did not squeeze nearly enough water out of the zucchini before adding it to the bowl.  I would absolutely  wring the zucchini out in a clean dish towel after draining in the strainer next time. 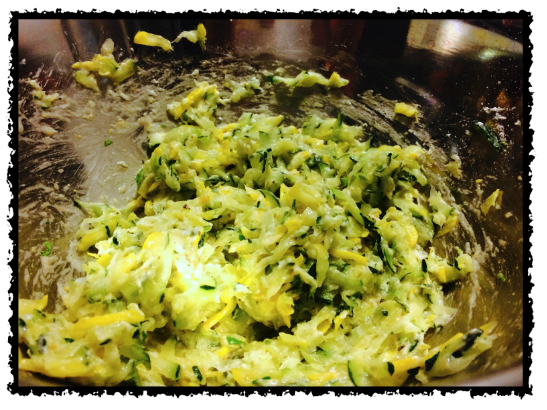 See, too watery. I know that you’ll do better than I did!

I served mine with a little vegan mayo mixed with sriracha and lemon juice.  I would have used lime had I had it on hand. 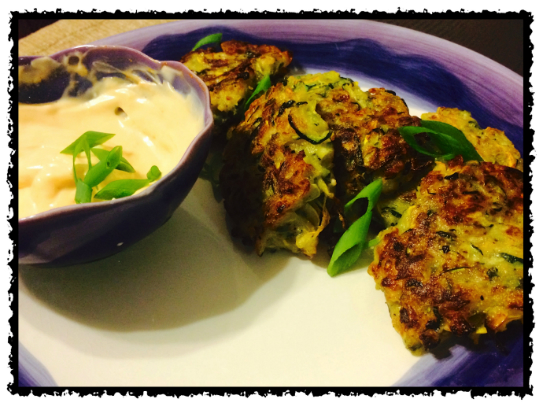 Even a little soggy, these were delicious!

If you’re ready to make your own, you can check out my recipe for vegan zucchini fritters here!

As much as I loved the fritters, there are plenty of ways to eat zucchini or other summer squashes.  My favorite way has been to slice it up into a foil packet, perhaps with a little onion, season it with plant of salt, pepper, garlic and crushed red pepper, and throw it on the grill (or in the oven, now that I don’t have a grill).  What’s your favorite way to eat zucchini?