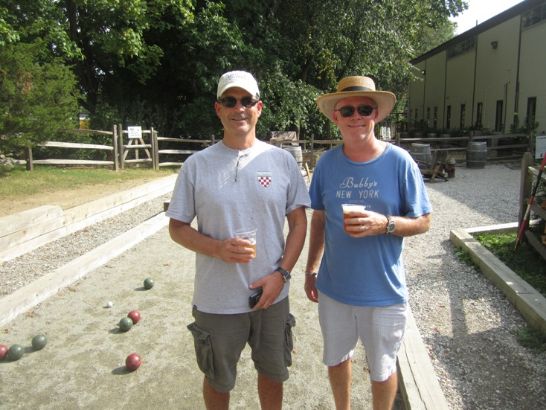 When we think of football, we think of frozen tundras and puffy, frigid vapors spilling from the quarterback’s mouth. If not that, at least some nippy autumnal temps to go with our pigskin, wings and, of course, beer.

So it’s a little tough to get into the spirit when it’s 90 degrees out, the humidity around 110% and climbing fast.

Kevin Duignan of Bronxville and Jim Lillis of Mount Vernon caught their sons’ high school games—Xavier and Fordham Prep—earlier on this impossibly steamy Saturday, and are stocking up on Captain Lawrence for the NFL Sunday opener.

But first, an impassioned game of bocce on the brewery’s expanded patio.

“We like beer and we like bocce, and we talked about coming for a long time,” says Jim. “I said, where are we going today? When he said, Captain Lawrence, I was like, can you pick me up in five minutes?”

The skies threaten heavy rain and worse. The air is so thick it feels like it could stop a bocce ball in mid flight. But the men soldier on. “We are a tough bunch of players,” quips Kevin. “Even the threat of rain does not keep us down.”

They are leaning towards the India Pale Ale for the Jet game on Sunday. Asked how the Jets look this season, Jim laughs the sarcastic laugh of a seasoned Gang Green fan.

The only place hotter than the patio, other than Satan’s sauna, is anywhere near the Gleason’s pizza oven. “We’re drinking a lot of Kolsch,” pizza man Andrew explains to a customer of his preferred coping mechanism. 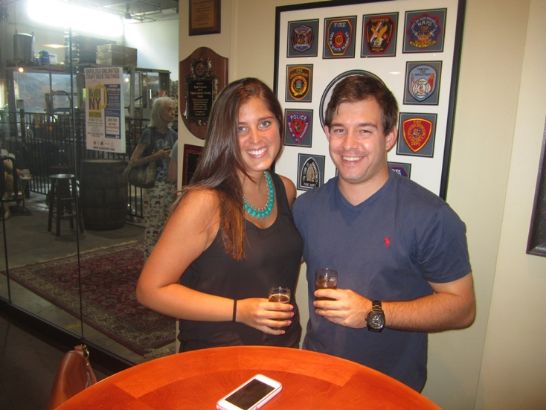 The AC is whirring away inside. John Lul of Riverhead and Danielle Dunne of Babylon are enjoying a few Liquid Golds over a barrel. John is the assistant baseball coach at SUNY Purchase, where Danielle is a student. John helped put the players through their paces earlier in the day. “It was pretty hot,” he says. “A few kids dropped.”

He too is a Jets fan. “We’ll see,” John says, showing a similar cautious pessimism as Jim Lillis. “Hopefully we’ll be a little better than last year.”

Danielle is having none of it. “Don’t count on it,” she says.

Back out on the patio, the clouds continue to thicken, and the humidity approaches 120%. Kevin and Jim’s epic game plods along. Mark Batchie of Mahopac, his fiancée Jackie, and their pal Brian Bellantoni of White Plains are combating the heat with cold beer samples. Mark is a good guy to know around these parts—he did the plumbing at Captain Lawrence. He and Jackie will, in fact, marry at the brewery later this month. 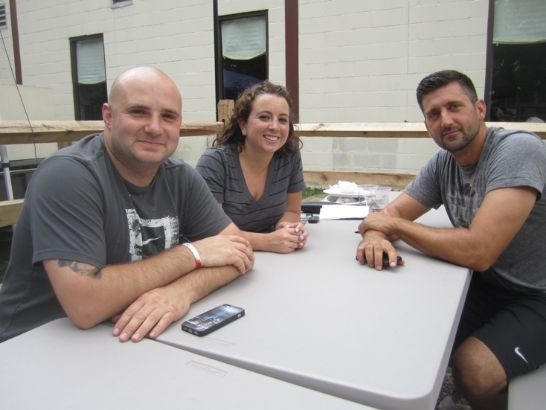 They’ll serve their Batch of Love red IPA at the wedding—brewed with extra love from Justin Sturges and Justin Perrone.

Mark roots for the Dolphins, which dates back to Dan Marino’s playing days. Jackie likes the Giants—at least most of them. “Get rid of Eli!” she says.

One can only take the outdoor temps in small doses. Back inside, beertender Jack Reilly gets on the mic and announces an illegally parked Prius and the 4 p.m. tour. A woman yells for him to put on some dance music. “No dance music!” Jack shoots back.

But it’s Stevie Wonder coming out of the speakers, and it sounds great. “Sir Duke” cranks; Mike Horton’s right leg bops in time. He can, indeed, feel it all over. “Good vibe music,” the Bronx resident explains.

Mike and Bryant Srour of Goldens Bridge (“My family can’t even say it,” Bryant says of his tricky last name) are old pals from Mount Kisco, reconnecting over locally brewed ales. It was Mike’s idea; he buys the Liquid Gold in the grocery store, and wanted to try it at the source. “I’d heard a lot about the brewery,” he says. “It’s lived up to the standard.” 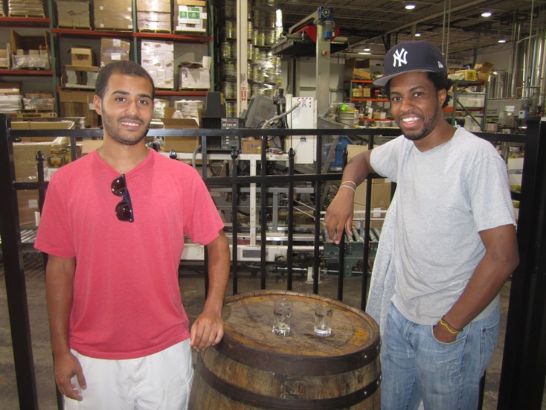 Bryant sounds the virtues of “home beer”—not home brew, but beer brewed close to home. “There’s just something about it,” he says.

Bryant calls this beloved custom “an innate guy thing.” “I think it’s something you’re just born with,” he adds.

But across the room, Danielle Dunne suggests football-and-beer transcends gender.

Red, white and brews. We’ll drink to that!