I know, I know, it’s the best part of the season right now for fresh produce, and I’m posting about something you can post about any time.  Well, it’s because I’ve been so busy making things for canning and freezing purposes without taking pictures (not to mention that I don’t make my own recipes for canning, as I want to use tried, true and tested recipes) that I haven’t had time to make other food.  It’s the trade off of the season.

Except chili.  I’ve been making lots and lots of chili, but I’ve posted about that before.

I’ve never liked seaweed.  I don’t like it touching me in the ocean, and I most certainly don’t like to eat it.

Over the years I’ve gotten a bit more adventurous to the point where I can go to a sushi restaurant and order an avocado roll and eat and even enjoy it to a degree, but given the choice, I much prefer to take seaweed out of the equation.

Technically speaking, you could use anything that’s flat and pliable to roll sushi.  One of my friends used to make it for me with rice paper rolls, I’ve see it done with injera (Ethiopian spongy flatbreads), and I suppose you could even use a tortilla.  There’s also a seasoned tofu pocket called Inari in which sushi can be made.

But sometimes you want to be like other people and eat sushi more like it’s typically served, except without the taste of ocean (this being the vegan column, I’m of course not talking about using fish in any of these applications).  Enter the soy paper wrapper. 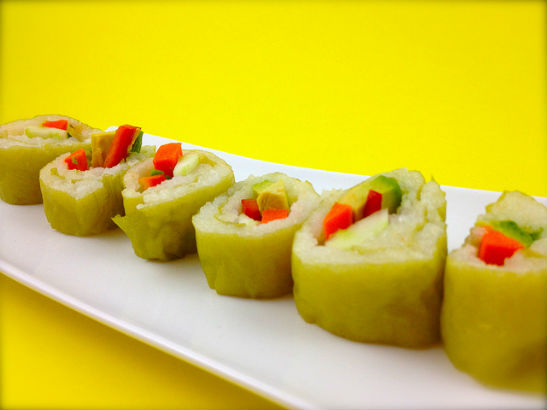 These wrappers are the same size as standard nori sheets, and about as delicate.  They come in several different colors.  They don’t taste like much of anything, but that’s kind of the point here.

I’ve found them at Golden Village in Scarsdale, though I presume you can get them at HMart or any other Asian food store in the area.  They can also be found on amazon.com.

So the next time you want to have people over for sushi and have a picky eater or two in the midst- or if you’re that picky eater- give these a try!