This past Sunday, I had a lovely food experience at Thanksliving.

Every fall for the last 9 years, the Woodstock Farm Animal Sanctuary has a “Thanksliving” celebration.  It’s primarily a fundraiser for the animals that the sanctuary saves, but also to raise awareness about these animals.  I’ll be posting more about the animals over on my own blog in the next few days, but I wanted to share with you some of the amazing food that I had while there.

The Thanksliving celebration opens with passed appetizers.  These included Treeline vegan cheese, an NY produced vegan cheese line (hint:  it’s delicious, and you either wouldn’t know or wouldn’t care that there’s no dairy), appetizers made with NY’s The Regal Vegan’s Faux Gras and Basilicotta, stuffed mushrooms, and the amazing vegan sliders from Marty’s Vegan Fast Food (again, either you wouldn’t know or wouldn’t care there’s no animal products in these).  Unfortunately I didn’t get any pictures of appetizers, but wait until you see the rest!

The Thanksliving sit down dinner started with an amazing Coconut-Sweet Potato Bisque with Fried Shallots and Smoked Coconut. 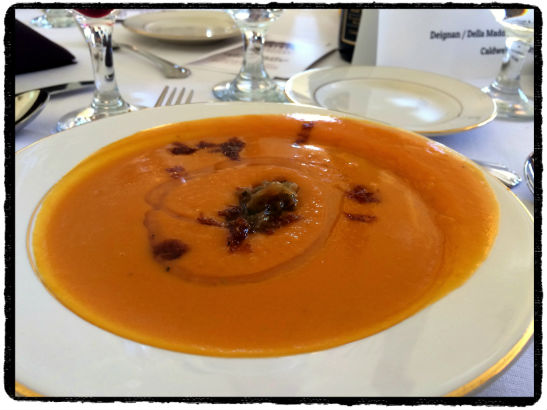 I think that this soup could definitely be recreated, but let me tell you how amazing it was.  Amazing, I tell you.  It was silky and smooth and rich but not overpowering, sweet without being cloying and the shallots and smoked coconut were a perfect compliment.

I could go on, but I think you get the idea.

Next up for Thanksliving was the main dish. 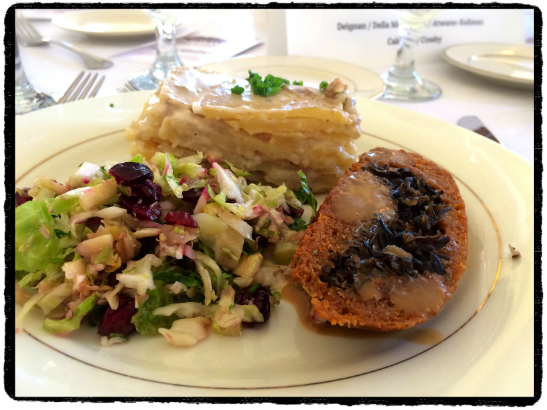 I’m betting that salad would not be hard to recreate. Thinking that might be an addition to my Thanksgiving table this year!

You’ll see a Yukon Gold Potato Gratin, Shaved Brussels Sprouts Salad and Pumpkin Seed Dusted Chickpea-Seitan Roast, with a Shiitake Mushroom and Wild Rice Stuffing (the MC may have referred to the shiitakes as “gossiping mushrooms.”  Get it?).  Delicious!  The potatoes got to be a bit much in the context of all the other food (after all dessert was still to come), but they were delicious, along with everything else.  And I saw not a single shaved Brussels sprout left on anyone’s plate.  How’s that for a fall-themed Thanksliving side dish?

Both the soup and main entree by Miss Rachel’s Pantry of Philadelphia.  I know where I’m going on my next trip to Philly!

Last up, desserts by Vegan Treats. 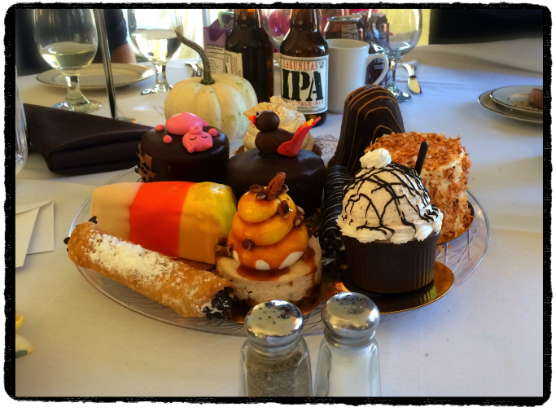 The candy corn cake there? Everyone thought it tasted just like candy corn. Go figure!

Though Pennsylvania based, Vegan Treats can be found all over Manhattan (haven’t found them in Westchester or Rockland, but a girl can dream, right?).  These desserts were beyond good.  Like, crazy beyond good.  I’m not just talking about “good for something vegan,” but you’d be thrilled with these in any setting.  I tried just a bite of each, and was amazed.  My personal favorite was the pumpkin pie, but that’s probably because I’m not a huge chocolate fan (note, that doesn’t mean I don’t like chocolate, it’s just not my favorite). An amazing ending for Thanksliving!

Whether you are vegan for the animals, your health, the environment or you’re not vegan at all, everyone can enjoy a meal like this (and don’t worry, there were allergen free dishes for everyone in that crowd).  Sometimes it’s just nice to show how absolutely delicious vegan food can be.  That’s a big part about what Thanksliving is all about.