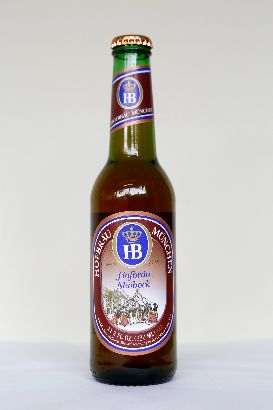 Description: By tradition, the first barrel of Maibock is tapped in the Hofbrauhaus in the last week of April, in time for the merry month of May. The success story of Munich’s oldest bock beer goes back as far as 1614. With its powerfully aromatic flavor and its alcoholic content of some 7.2% volume, Hofbrau Maibock marks one of the high points in the beer-lover’s calendar!

Tasting notes: Pours a deep amber-copper into the glass with a nice head. Nose is of caramel and toasted malts with some yeast character too. Taste is a malt compilation; so much going on! Nice warming character from the 7.2 ABV and it is scary how drinkable it is. I always look forward to this beer!

If you like this, try: Einbecker Mai-Ur-Bock, Ramstein Maibock (limited availability).

This beer is part of our Mixed Six series. Working with the beer experts at Half Time in Mamaroneck, we are featuring a beer a day for 24 days, including tasting notes and suggestions for pairing. At the end of the 24 days, we invite you to join us at Half Time from 5-8 p.m. on November 13 for a Q and A, beer tasting and discounts on mixed six-packs with our carefully selected featured beers.  Half Time, 139 Hoyt Ave., Mamaroneck, 914-341-1666, www.halftimebeverage.com.