Enjoy Fall Before It Gose 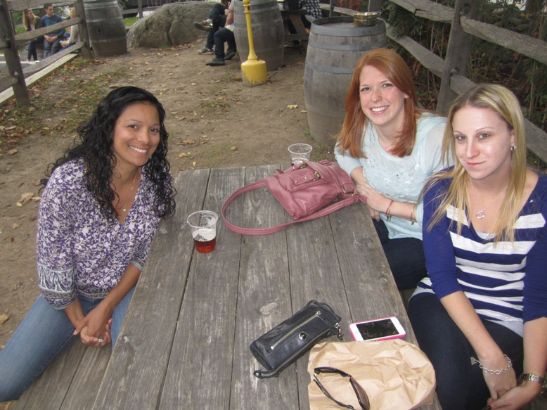 Before fall was to take a sharp turn toward wintry temps, it was a great day for enjoying the autumnal charms on the Captain Lawrence patio. With a name that translates to “the beer garden”…well, minus the “beer”…Michelle Desjardin of White Plains is right where she belongs.

It’s Michelle’s birthday, so she’s got a healthy crowd out on the patio, including Amy Burger of Tarrytown and Kathy Miracolo of Plainview, along for the ride. “Since it’s my birthday, I said, this is what we’re going to do,” Michelle says with a smile.

Fall is Michelle’s favorite season for a variety of reasons. “You see the leaves change, it’s got the best races,” says the avid runner.

Kathy contributes to the fall pictorial. “Boots and scarves…pumpkin beer.”

Alas, the Pumpkin Ale is not flowing today, so the ladies make do with the Freshchester Pale Ale. “We’ll probably buy a six-pack of the Pumpkin,” says Michelle, about to get her first birthday present of the day. 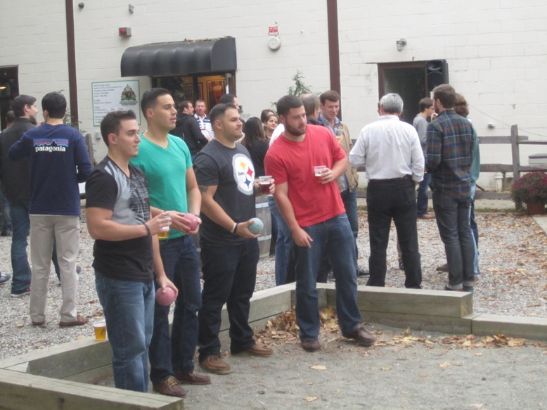 The patio is jammed. Gleason’s serves up the brick oven pizzas; the smell of burning wood in the oven adds to the seasonal charm. My Morning Jacket tunes crank from the new outdoor speakers; it is indeed morning jacket weather, whatever the heck that might be, or no jacket at all.

Dylan Mabin and Michael Francisco-Mcguire of Brooklyn are celebrating as well. Both have infants back home, and both hard-working dads got the green light to have the day to themselves. So they put their bikes on Metro-North, trained it to Pleasantville, then biked it down the rail trail to the brewery in Elmsford.

“I called Dylan and said, wanna get out of Dodge?” says Michael. 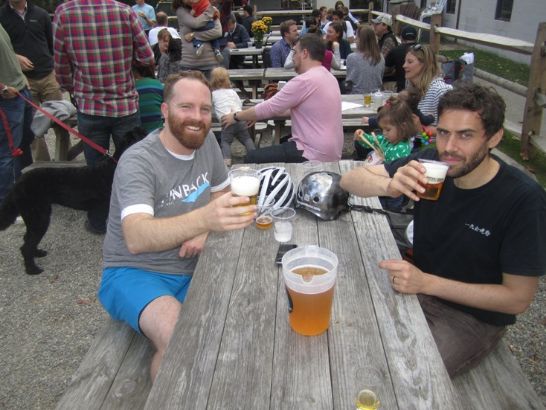 Dylan’s answer came back a resounding yes. Their bikes leaning against the fence, the men enjoy the Gose Before Bros, brewed by Captain Lawrence’s Justins—Sturges and Perrone. Gose is a top-fermented beer originating in Germany and featuring malted wheat. The Justins’ version is flavored with salt and coriander for a light, tart and unique concoction. “It’s real refreshing; salty, a lot of wheat to it,” says Dylan.

Fall elicits a big batch of sensory images for Michael. “Colors, smells, renewal, friendship,” he says. He and Dylan, free men for the day, raise their cups of Gose to that.

Some prefer the heartier, hoppier beers when the leaves start to fall. Mike Rivisto of Yonkers sips the perennial favorite Captain’s Reserve Imperial IPA, a citrusy hop monster sporting a 9% alcohol level. To him, fall represents “Pumpkins. And beer…darker beers.”

Wife Regina quaffs the Limone Lupollo, a specialty wheat beer with brewed with lemon. “It’s just a nice fall day, and we wanted to get outside,” she says. 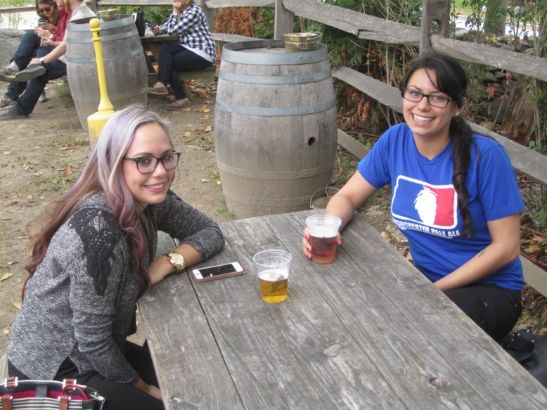 Tucked into a picnic table with a grand view of the bocce court, Katherine Levene and Amethyst Chiasson of White Plains too are making the most of the stellar sweater weather. Katherine has the Liquid Gold, while Amethyst, ears still ringing from Judas Priest the night before, sips an India Pale Ale. “I’m going to the city tonight,” she says. “That’s why it’s not the imperial IPA.”

It will be a friend’s birthday party, at a club on the west side, some fancy bottle service. Katherine has different plans for the night. “Maybe sleep,” she says.

The two also have different takes on the season. “I love fall,” says Katherine. “To me it means pumpkin, anything pumpkin. And boots, and sweaters, leggings, Starbucks. Halloween…my favorite holiday.”

Amethyst—the name, translated from Greek, literally means “not intoxicated” (honest—look it up)—describes herself as a summer person. “Warm weather and beer,” she says.

She takes in the lively surroundings at Captain Lawrence—friends celebrating birthdays, old pals catching up over craft beers, roaming dogs, roaming children chased by parents—and reconsiders the proposition of fall. “I actually don’t mind hoodies,” Amethyst says, “and a bunch of beer drinking.”