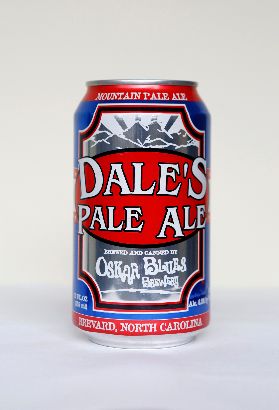 Description: Dale’s Pale Ale is their flagship beer and America’s first hand-canned craft beer. It’s an assertive but deftly balanced beer (somewhere between an American pale ale and an India Pale Ale) brewed with hefty amounts of European malts and American hops. It features a meringue-like head, copper color, and a happy nose, thanks to a big post-boil addition of Centennial hops. To complement its hoppy first impression, Dale’s also sports a rich middle of malts and hops, and a bracing finish.

Tasting notes: Oskar Blues Dales Pale Ale from Oskar Blues Grill & Brew is an American Pale Ale style beer, medium in color, is moderate happy, has an ABV of 6.5% and is available in-store or at our online beer store.

Food pairing: This American Pale Ale style beer is best paired with pan-Asian foods, salads and also tastes great with earthy cheeses such as Camembert and Fontina, or nutty ones like  Asiago, Colby and Parmesan.