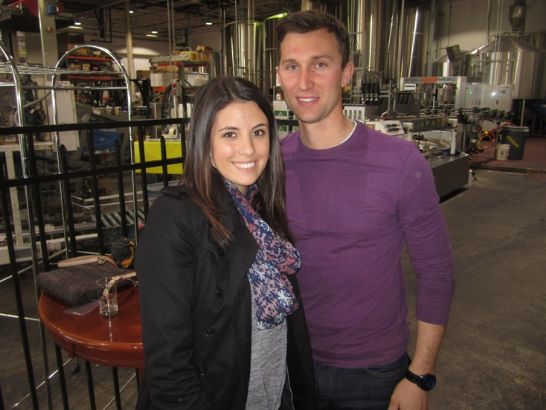 That brutal All Souls Day wind—the howling harbinger of winter–daring you to venture outside, more likely encouraging you to stay in and watch the miserable Jets.

The Captain Lawrence patio was as lonely as a costume shop the day after Halloween, the bocce court vacant, pizza guy Gordon Seltzer wishing he had someone to talk to. Yet it was that very wind that pushed Kate Schlott and Michael Russo, not to mention 6-month-old Henry, down Rte. 9A and finally into the welcoming arms of the brewery. They were without power back home. “We figured, we’d go for lunch and bring the growlers here to fill up,” says Kate.

She’s sipping the Smoked Porter, Michael the small-batch Popo Zao. “It’s a little strange,” he says of the English extra special bitter-German-style Kolsch hybrid. “But I liked the Gose Before Bros.”

Captain Lawrence is something of a home away from home for the couple; Kate held her baby shower here. “Everyone else got to enjoy the beer,” she says. 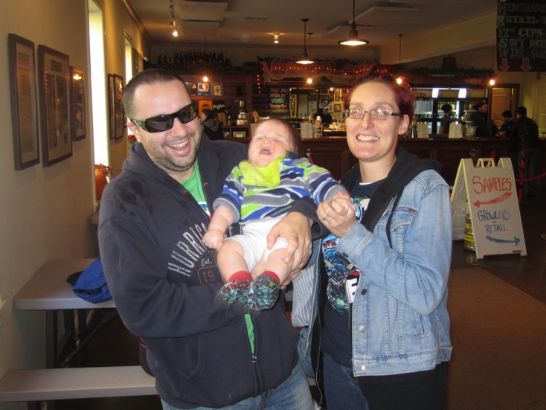 The kid stays in the picture!

With the clocks turned back earlier in the day, the countdown is on until the sun sets way too prematurely. Right now, the pair digs Daylight Savings Time as much as they like their electric company. “Please go away,” Kate says of it. “We’re no longer a nation of farmers.”

October behind us, there’s definitely a feeling of fall fading fast. Fittingly, Def Leppard’s “Bringin’ on the Heartbreak” is on the house speakers. Emanuel Santodonato and Lillian Gurtowski of Norwalk are squeezing the last bits of autumnal activity out of the season. They picked apples last weekend, and are enjoying fall beers today. “It’s cool and crisp,” says Emanuel, who bears a passing resemblance to former Jets quarterback Mark Sanchez. “We want to do fall things.”

Lillian has the Harvest Ale, Emanuel the coriander-spiced, malted wheat brew Gose Before Bros. “It’s really complex—I can taste the berries, the wheat,” says Emanuel. “Gose are salty, but this one does not taste like a pretzel.” 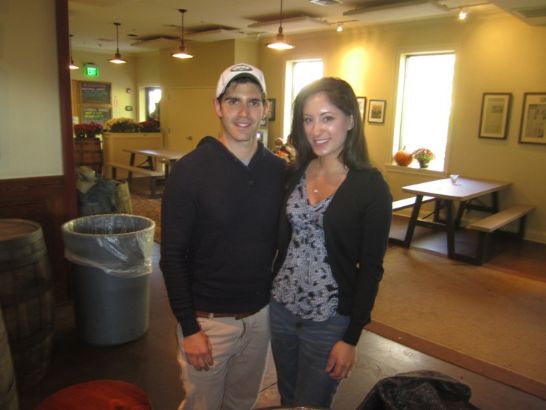 Throws a better spiral than Mark Sanchez…In fact, they both do!

Speaking of Mark Sanchez, there’s a rumor around the tasting room that the exiled QB is not only playing in Houston, but actually threw for a touchdown. No one seems to believe it.

Over at the bar, the CL boys talk about Friday’s Halloween party. Jack Reilly was Pippi Longstocking, horizontal braids held in place with a bent coat hanger. Rob Catalano was the Joker. Valhalla’s Steven Derosa assembled the horror film reel that showed on a big screen while the bands played. The Hitchcock author, true to character, dressed up as the necktie strangler from Hitchcock’s film “Frenzy.”

Another sign of the fair weather seasons apparently behind us, several picnic tables have been relocated into the tasting room. Lauren Feczko of Oakland, New Jersey and Nick Baczkowski of Port Chester rest on one, he with the India Pale Ale, she with the Popo Zao. She wears a Lawrence Taylor #56 throwback jersey—uh, Captain Lawrence indeed–and Nick a Patriots sweatshirt. “I’ve been a Giants fan since the womb,” says Lauren.

They’d been talking about visiting Captain Lawrence for eons, and finally got their act together today. “We were looking for something to do for when our landlord was supposed to come by and collect the rent,” quips Nick. 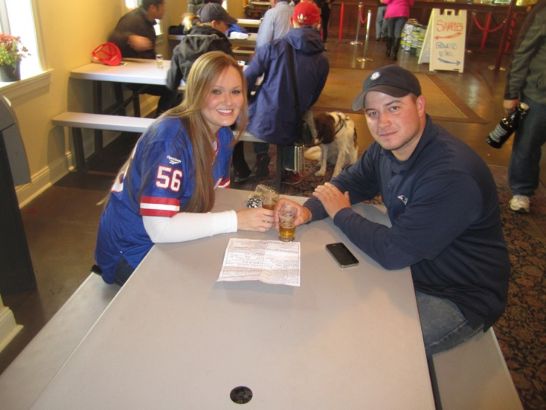 The jersey of another standout New Yorker named Lawrence.

Lauren made the most of the extra hour, catching up on The Walking Dead and Nashville. Her initial experience with Captain Lawrence—finding the door, figuring out the token system—threw her for a curve. “But I had my first sample, Liquid Gold,” she says. “I caught my breath and said, OK, this is cute.”

Elsewhere in the tasting room, Jen Regan and Steven Griffin of Danbury too are enjoying fall flavors before winter hits: she’s got the Pumpkin Ale, he’s got Cooktoberfest, a traditional marzen-style brew. “It’s smooth,” he says. “It’s everything an Octoberfest beer should be.”

The couple has “tried to do as many October-y things” as possible, says Jen, including Octoberfest in Boston, and seasonal beers such as Shipyard’s Pumpkinhead and the Pumple Drumkin from Cisco in Nantucket. They can scratch Captain Lawrence off the fall list. Steven is pleased to see everything is brewed and bottled right on site, not outsourced upstate.

That brutal wind, Jen says, signals “the entrance of winter.”

“If this wind is any indication of how winter will be,” Jen adds, “we’re all screwed.”