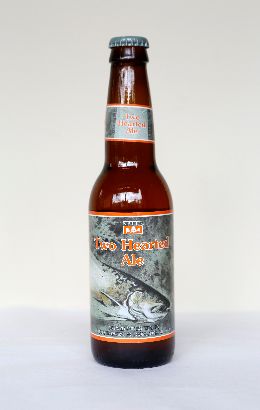 Description: Two Hearted Ale has an intense hop aroma and malt balance. This American IPA is hopped exclusively with the Centennial hop varietal from the Pacific Northwest, massive additions in the kettle and again in the fermenter lend their characteristic grapefruit and pine resin aromas.

Tasting notes: Bells Two Hearted Ale from Bells Brewery is an India Pale Ale IPA style beer, medium in color, is more than moderately hoppy. It has an ABV of 7% and is available in-store or at our online beer store.

Food pairing: This IPA style beer is best paired with curried dishes and Thai cuisine featuring shellfish. Cheeses can be peppery such as Monterey or Pepper Jack, pungent such as Gorgonzola and Limburger or sharp cheddars.