Getting Out While the Getting’s Good 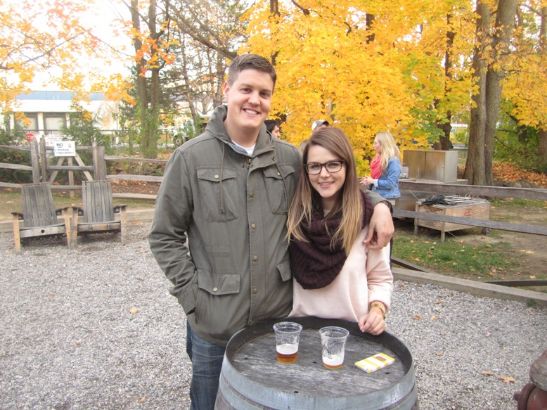 A group of six men is gathered around a Samsung phone resting on a barrel on the Captain Lawrence patio. They’re watching the Jets. The screen goes blank.

“Please deposit 25 cents for the next minute,” jokes one of them in a robotic voice. They laugh. The game comes back on.

The Jets are actually winning.

How could it not be a special day?

It’s classic fall weather, crisp and clear, and there’s the feeling there aren’t too many left this year where you can enjoy a beer on the patio and not rattle your sample glass against your chattering teeth. Jason Barber and Kathleen Morris of the Upper East Side spent the day traipsing around Sleepy Hollow Cemetery, then googled something else to do in the area when Captain Lawrence popped up in an old Time Out New York story.

“We’re both brewery and beer enthusiasts,” says Kathleen. She and Jason utter “enthusiasts” at exactly the same time, in perfect harmony–the sign of a winning couple.

“Beer brings people together,” adds Jason. He’s got the Imperial Pale Ale, which proves to be a popular choice on the day. “I like the hoppiness, and the bang for your buck,” he says, a nod to the Captain’s Reserve’s 9% ABV.

Kathleen, meanwhile, is enjoying her first Kolsch since sipping one in Cologne, Germany.

The pair has been sampling various small batches too, such as the session IPA known as Hop Chug and its cousin Hop Commander, and running rampant over all opponents in cornhole. “We played three different teams and we haven’t lost once,” says Jason proudly. 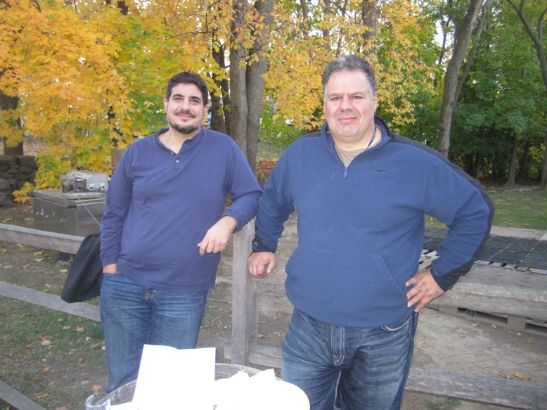 Elsewhere on the patio, a couple Men of Mystery—so mysterious they only go by first name and last initial—are also trying out hearty brews such as the Imperial IPA and the Smoke Up smoked porter. Ramsey A. of White Plains had been at Captain Lawrence the previous day, and made enough of an impression on pal Victor N. of Harrison that both ended up arriving at the brewery a day later. A doctor specializing in interventional radiology, or minimally invasive image-guided procedures, to you and me (“I play video games all day,” he explains), Ramsey learned of the place from his “much hipper, much younger brother,” who hangs at Captain Lawrence frequently.

They’re enjoying the fine fall weather while they can. “I think today might be the last,” Ramsey says of the al fresco imbibing days.

“We’re getting outside while the getting’s good,” adds Victor.

Some prefer the warmth, not to mention the moody Jeff Buckley tunes, inside. Rita Carter of Buchanan is enjoying a beer with her son, Jeff Tyc. Rita used to visit Captain Lawrence back in its Pleasantville days, and is regaling Jeff with the story of the brewery, and founder Scott Vaccaro before he got, as she puts it, “rich and famous.” 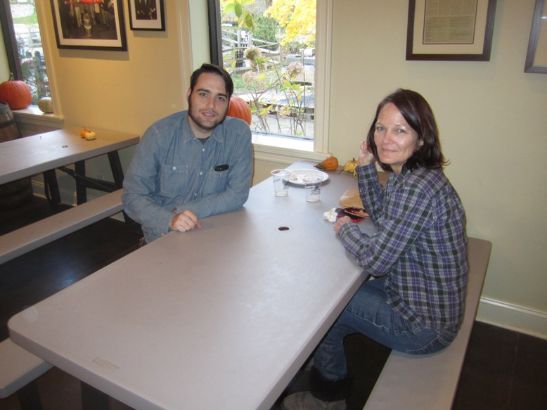 Rita enjoys the Kolsch, and Jeff the Imperial IPA. Jeff is plotting what to bring home, and it looks like a sixer of the IPA. A growler, he says, “is a big commitment.”

Speaking of commitment, Dan Schasse of White Plains and Cristiane Silva of Mount Vernon have their rescue dogs at their feet. Cristiane did not expect the brewery to be dog-friendly. “I was waiting to be yelled at,” she says, though her Dachsund named Mama is more than welcome, long as she doesn’t smoke or drink from open bottles, same as everyone else.

Dan’s lab/shepherd mix is named Farley. “As in Chris,” he explains. “I worked with a guy named Farley; I just like the name.”

Both are enjoying the Liquid Gold, a Belgian-style ale. “I’m not crazy about beer,” says Cristiane. “But this is good.” 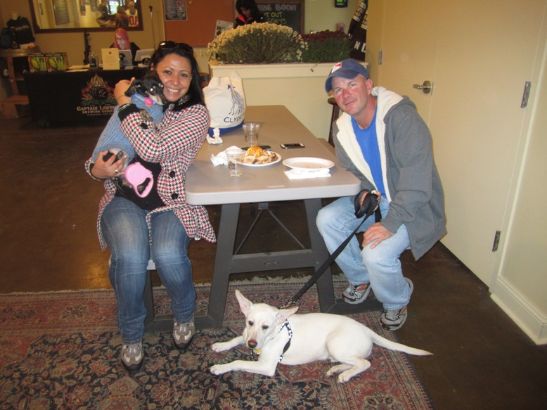 Veterans Day is just a few days away, but most everyone in the tasting room will be working that day. Cristiane spent time in the Air Force and has several friends in the military. She makes a point to salute their service. “Thank you for all the work they do, the sacrifices they make,” she says. “I couldn’t be more grateful.”

A fine fall day and a salute to America’s bravest—we’re grateful too.