The Captain’s Log: A Thanksgiving Day Monster, and We Don’t Mean Turducken 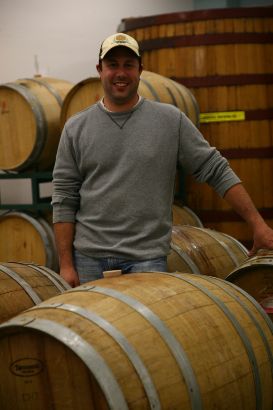 The leaves are all but down, the cold weather is very definitely upon us, and the tap lineup at Captain Lawrence has shifted to heartier brews. The Frost Monster is back! Hibernating all summer, the monstrous imperial stout, brewed with a massive amount of malt and sporting a fearsome 11% alcohol by volume, is on draft and available in four-packs. The Monster’s makeup is slightly different from last year’s iteration. “We cranked up the roasted malts—we’re always trying to make things better,” says owner Scott Vaccaro. “It’s a big, strong, warming beer.”

Nearly as bold—OK, nothing is really nearly as bold as the Frost Monster. But also packing a substantial punch is new release Hopsomniac IPA. A partnership between Captain Lawrence and Stumptown Coffee Roasters, Hopsomniac is an india pale ale brewed with Stumptown Cold Brew coffee. The coffee side of the equation is rich and intense, and the IPA end citrusy and hoppy. It’s unique and it’s good, and it’s for sale at Whole Foods and at Captain Lawrence.

“Hopsomniac combines the best elements of an IPA and a good cup of coffee,” says Scott. “What better way to stay up late, drinking IPAs than drinking them with coffee?”

Sticking with the big, bold beer theme, the Captain’s Reserve Imperial IPA—for years a draft beer and a 17-ounce bottle sold individually—will debut as a four-pack of traditional 12-ouncers in January. “It’s more bang for your buck,” says Scott of the new packaging.

And that same Imperial IPA—it’s perhaps the most popular offering in the tasting room—has led the Captain’s charge into Philadelphia. The Imperial IPA kegs arrived in the City of Rocky, Adrian and Brotherly Love a few weeks ago, and will be followed by the Smoked Porter in the next few weeks, the IPA in December and the rest in January. All are in kegs; Captain Lawrence six-packs hit Philadelphia further along in ’15. Philly represents a major branching out for Captain Lawrence. (For the record, famous resident Ben Franklin did not actually say “Beer is proof that God loves us and wants us to be happy,” though countless t-shirts at beer fests credit him for saying it.)

Such expanded production requires extra brewing space, and Scott is planning to take on an extra 4,800 square feet next to the existing 19,000 square foot facility in February. The extra leg room allows for both barrel storage and a second bottling line. Oak tanks are en route from all over the globe, including a pair of 1,400-gallon vessels from a winery in San Diego, and two more 800-gallon barrels from Italy. All told, more than 4,000 gallons worth of oak tanks is headed to Elmsford.

Any of the aforementioned full-bodied beers would be a fine selection to bring to Thanksgiving dinner. The brewery has also held back a batch of Pumpkin Ale kegs, with growler fills on sale this week. They’ll go quickly. Other Turkey Day options include small batch brews like the easy drinking Hop Chug IPA, a 4.9% ABV beer brewed with Mosaic and Chinook hops; and Second Runnings, a cousin of the Frost Monster jazzed up with espresso from Black Cow in Pleasantville.

Scott says the classics do just fine on Thanksgiving too. “There’s nothing like a cold Freshchester Pale Ale,” he says, “to go with turkey, football and family.”