I had only been to Alain’s Wine and Tapas in Nyack once before, as the first part of a “progressive date” – appetizers at one place, entree at another, dessert at a third – and was left very eager to devote a full meal to their delicious tapas and generously-poured wine! I also adore the decor and ambiance. The small space has beautiful, dimly-lit chandeliers dropping from its glossy red ceiling, which makes for a very cozy-sexy feel; the low lighting, alas, made for terrible photography from my lowly camera! Dark and blurry as the pictures may be, however, they’re making me hungry upon repeat viewing, desperate to taste these delectable selections once more… 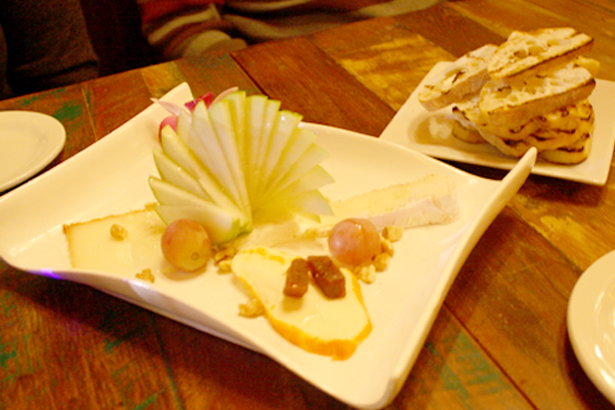 The Restaurant Week menu had four sections: two separated sections of tapas (one selection to be made from each), your choice of two “sides”, and dessert. My dining companions and I started with the always-incredible cheese plate (which on this night featured Taleggio, Manchego, Brie, and Spanish goat cheese) and a bottle of Bodegas Franco-Espanolas Rioja Bordon Reserva 2008 (so-chosen, by a friend who knows more about wine than I do, because he correctly thought it would be “incredibly mellow and pairs well with almost anything…not too dry, not too sweet, not too heavy”), then got down to it. 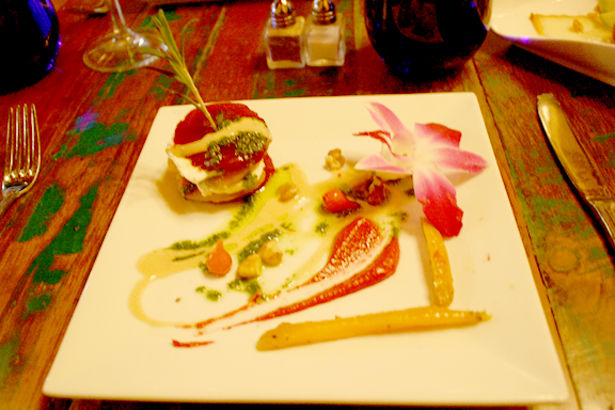 Almost all of us got the Napoleon of organic beets and goat cheese herb sauce. The stack of sliced oven-roasted beets and Spanish goat cheese, speared by a rosemary sprig and topped with an herb vinaigrette, was phenomenal. The rest of the plate (which I left absolutely clean, tasting – and loving – everything!) was a mystery I had to call up later to clear up. Two strips of parsnips roasted in olive oil and garnished with salt and pepper; a red streak of thick beet sauce; a smear of herb pesto; tiny little “drop peppers” (which were almost like berries); crushed walnuts; and a smear of Spanish wildflower honey. 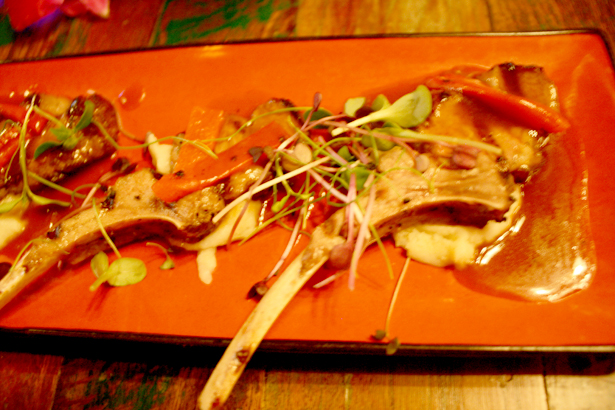 My grilled lamb chop with cauliflower puree and lamb demi-glace also had a lot extra going on. The lamb itself was tender, flavorful, and easy to eat off the bone, and smelled heavenly. I loved the little puddle of cauliflower puree each sat in; it was just the right amount. Strips of red pepper and hydroponic microgreens made the bright-red plate complete. 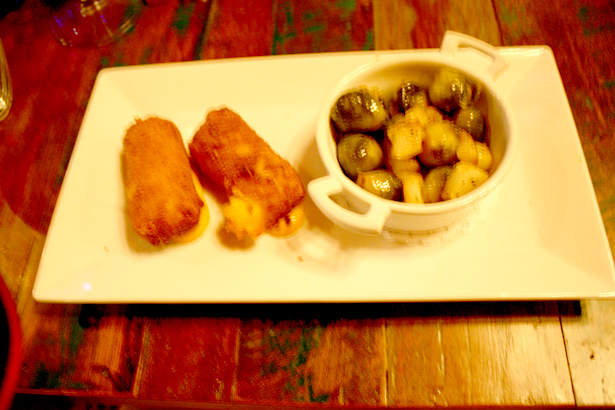 The roasted baby Brussels sprouts were incredibly tender, the pears extremely mild. The potato croquetas were very, very smooth inside (mashed potato blended with Manchego cheese), and substantial. The exterior coating of herbed breadcrumbs really held its own with a good ratio of inside to outside. Each of the two croquetas sat in a delicious puddle of paprika aioli. 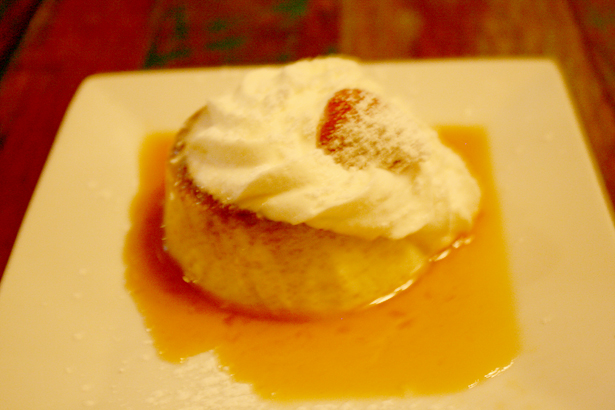 The Catalan creme caramel with cinnamon and vanilla was nicely spicy with a lot of cinnamon flavor. I don’t always love custard-based desserts but between the whipped cream and the cinnamon this had enough going on that the silky custard was a nice mild vehicle for the other flavors.

Can’t wait to go back again and try yet another incredible combination of delicious bites – and some more wine, of course!