People are reading
You are at:Home»Restaurants»Peekskill Brewery: Restaurants We Love 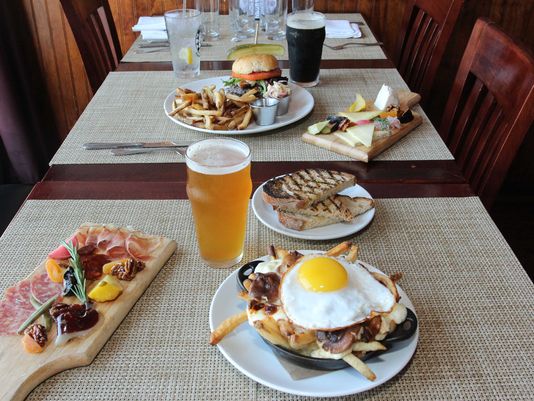 The word-of-mouth buzz on the beers at Peekskill Brewery has been terrific, so we were expecting tasty, well-crafted brews when we stopped in for brunch on a recent Sunday afternoon. But we were delightfully surprised at how good the food was.

A couple of years ago, they moved into a four-story industrial building of their own on Water Street, with a huge and welcoming Tap Room sharing space with the actual beer-making operation on the first floor. An elevator takes you to the second-floor Pub, with plenty of dining tables and another long bar on one wall.

Even on a dreary, windy Sunday, the downstairs bar remained full the whole time we were there. Everyone seemed to be ordering both food and drinks, with lots of space to spread out on the bartop, and plenty of side tables if all of the high-backed comfortable seats at the bar were taken.

We opted for the upstairs Pub and enjoyed the two views — out over the industrial riverfront and down into the Tap Room. The staff was attentive, affable and knowledgeable, especially about the beers and spirits. 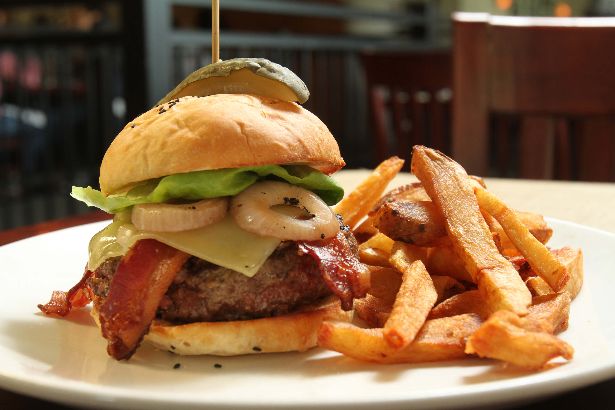 Soft pretzel with cheddar and IPA sauce. This was part of the short Snacks menu. The homemade pretzel was piping hot, salty and chewy — all good things — and served with an addictive cheesy-beery dipping sauce. Absolutely delicious with a half-pint of the Amazeballs beer on the menu, one of about a dozen on the list of home brews.

Sardines, oven-roasted tomato and crackers. Another choice from the Snacks section, and not exactly what we expected, but very good. The sardines and tomatoes were mixed with cooked onion and garlic and formed into a terrine the shape of a tuna fish can. Very sardine-y and salty and oily, but also sophisticated and lively. Again, great with a beer.

Kale salad. The kale was served with pickled shallots, sliced almonds in a creamy Parmesan dressing. It was big and tangy and chewy.

PB Burger. Bingo! What a good burger. It was perfectly medium rare, topped with applewood smoked bacon, grilled red onion and Grafton cheddar, on a potato roll. Very well conceived, with all of the elements humming along together. And excellent skin-on fries. Can I say that again? Just perfect. Crispy and salty and hot, but still tasting like potatoes.

Wings. They were offered three ways: hot, chipotle or with barbecue sauce, and served with the requisite blue cheese sauce, carrots and celery. We chose the barbecue, which was bit gloppy and cloying. Hot would have been better. Big meaty wings.

If your date is wine only, there are several options by the glass. The spirits list is quite substantial — and interesting! Ask the staff for advice. Along with the Amazeballs, we tried and thoroughly enjoyed half pints of the Hop Common and their classic Eastern Standard IPA. 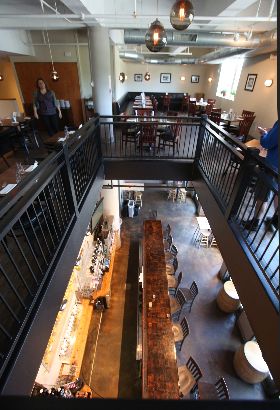 The crowd we saw was a super-casual mix of folks, leaning heavily toward Brooklyn hipster. But also couples and foursomes who weren’t young at all.

Brewmaster Jeff O’Neil joined the Peekskill team in 2011 after almost 10 years as the brewmaster for Ithaca Beer Company, where his direction earned multiple awards including TAP New York’s Best Craft Brewery in New York State in 2008. He’s the wit behind the clever beer names on the menu: Dead to Me, Vaporizer, Malt Balls, Soft Pour Corn.

Cocktails! We love the drinks list. All of the them sound adult and delicious, especially the Hudson Mule and the Alpino Negroni. And hey, the Metro-North train station is just around the corner.

Downtown Peekskill keeps humming along. The new Lincoln Depot Museum is at 10 S. Water St. The Paramount Theater is at 1008 Brown St. Wine lovers should check out the nearby Dylan’s Wine Cellar at 50 Hudson Ave. The Hudson Valley Center for Contemporary Art is at 1701 Main St.

THE 411 ON PEEKSKILL BREWERY