Your Presents Is Appreciated 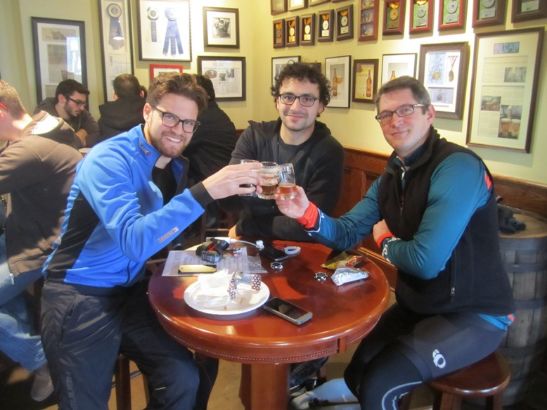 The sun poking through the clouds is a welcome gift from the heavens, and a clutch of bicycles leans against the beer patio fence for the first time in eons. Inside, a trio of cyclists unwinds after making the ride from the City. Kevin Siwoff of Brooklyn and Alejandro Castro and Tom Lewis of Manhattan are celebrating their accomplishment with samples of Liquid Gold.

“Around a month ago, we talked about taking a ride,” says Kevin. “Tom said, Captain Lawrence has tours and a tasting room. It was, need he say more?”

The guys are also enjoying the beers they don’t normally see down in the five boroughs, including the Hop Commander IPA and the Smoked Porter.

Speaking of welcome gifts, we chat about our greatest Christmas/Hanukkah/Chrismukkah presents ever. For Kevin, it was a Sega Genesis he and his brother got when they were boys. For Alejandro, it was his first guitar—a pink, green and white Ibanez that he still has. 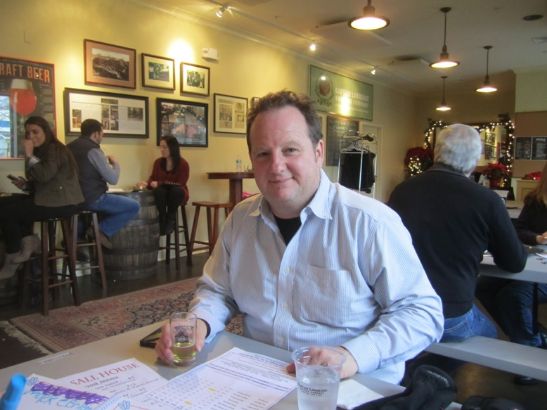 Across the tasting room on a mellow Sunday, Jack Horn of Ossining has gifted himself with a panini from the Birdsall House boys—for what it’s worth, the housemade meatball and cheese is delightful–along with the Sea Nymph, a calypso pale ale. He had initially moved to Pleasantville not long after Captain Lawrence opened in the village in 2005, and was elated to discover he could walk there. “I remember when Scott (Vaccaro), his mom and his dad were the three people there,” he says.

These days, Jack, a biology professor at Pace, hops on his bike to visit Captain Lawrence. He does a loop from Pleasantville down to Elmsford, over to Tarrytown and Briarcliff and back, using a slice of the same rail trail that Kevin, Tom and Alejandro took from the City, and stopping at Captain Lawrence for grub and a few samples.

Asked about his favorite Christmas gift ever, Jack thinks for a moment before his face lights up. Fittingly, it was a unicycle he got when he was 7. 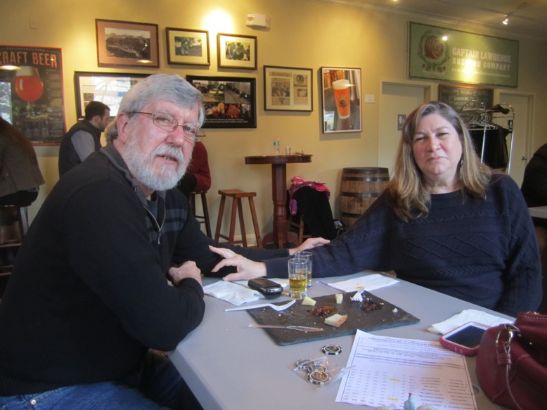 Elsewhere in the room, Donna Engelese and Lee Rogers have opted for transportation of the four-wheeled variety—hailing from Easton, Pennsylvania, they’re on a brewery tour that included Newburgh Brewing, Rushing Duck in Chester, NY, and Peekskill Brewery. “This is what we do,” says Lee. “Every time we go somewhere, we plan to see the breweries.”

Lee knows his breweries; after all, he works in the Weyerbacher tasting room back in Easton. He’s digging the Captain’s Kolsch, while Donna goes for a heartier brew. “I’m an IPA person,” she says, adding that the Brown Bird Ale and Birdsall’s cheese plate make for a “nice combo.”

Best Christmas gifts? Ones they got for themselves, or perhaps each other, just a month ago. Lee and Donna ventured to Belgium on a beer tour. “Seven breweries and countless cafes,” Lee says dreamily.

Speaking of beer tours, the 2 p.m. tour lets out. Old school punk plays on the house system. No one is home watching the Giants, though some are discussing Big Blue. “When Eli has enough time to throw, he makes bad decisions,” says one guy. “When he doesn’t have enough time, he rushes—and makes bad decisions.” 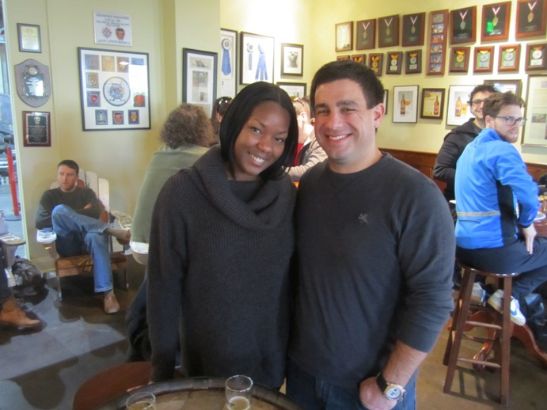 The German-style Kolsch also has fans in Shetara Melvin of Wappingers Falls and Rich Conte of North Salem. They dug the massive imperial stout known as Frost Monster too. “Very good,” says Shetara. “Strength,” sums up Rich of the 12% ABV, roundhouse-right of a beer.

Greatest Christmas gifts ever? Rich got an Atari 2600 handed down from his dad, along with memorable games such as Joust, Donkey Kong and Centipede. “I was very impressionable at that age,” he says. (As if anyone needs to explain their love for Atari 2600!)

Shetara beams as she recalls an EZ Bake oven. “I made my own candy bars!” she says.

The oven was eventually passed along to her sister, and then to Shetara’s niece– cranking out candy bars all the while.

Sometimes, your greatest present ever isn’t one you get. Amanda Audia, who works the tasting room door, pairing up people with their all-important beer chips, was pleased to reach an age where she could make her own money, and was able to buy a new TV for Dad and a blender for Mom.

“Giving gifts,” Amanda says, “has always been more rewarding to me.” 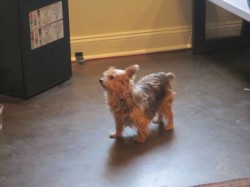 Gratuitous dog-in-the-brewery photo as a thank you for reading the whole post.