People are reading
You are at:Home»Drinks»Cocktails»Latin Twist: Cuba Libre

Cuba’s always been a part of my life, even though I haven’t been there, yet… Part pictures of my grandparents from the 1930s, part Celia Cruz (who’s singing to me as I write this!), part restaurants that my parents took me to in New York and Miami,  my father’s love of Cuban cigars, Afro-Cuban dance classes I took many years ago, reading Alejo Carpentier in college,  and of course thanks to mis amigos cubanos (my Cuban friends) Cuba has always held some intrigue for me. This interest has been fueled by friends’ visits to the island that I swore I could see from Key West. And now, big sigh, I see a trip in my future. In the meantime, and during this holiday season, I’m trying to keep things simple on the cocktail front, AND I’ve started going back to some classics.

The Cuba Libre, my friends, is a favorite in many parts of the globe. The  history of the Cuba Libre (Spanish for a free Cuba) varies. According to one popular account,  it was invented in Havana, Cuba around 1900  when patriots aiding Cuba during the Spanish-American War enjoyed mixing rum and cola and toasting to the island’s independence. The flavors seemed to meld well; the rest, of course, is history! 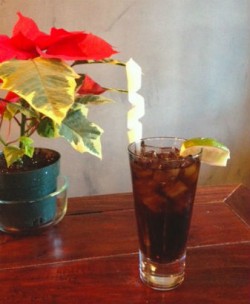 Now it’s funny: if you know me, you know I’m not a fan of sweet soda. Yet there’s something about this combination of coca cola, fresh lime juice, and rum that, like many others, I really enjoy. So, what should you serve with your Cuba Libres?  How about something salted like Pepitas, or Chimichurri-Topped Toasts,  Tacos, Tostones (I’ll have to share that recipe with you!), and more. But what inspired me to write about the Cuba Libre today, aside from recent news events, is that it’s a super simple drink to make and serve during this crazy holiday time! In fact, thanks to my cousin Margaret, we just decided that Cuba Libres will be our  pre-Christmas Dinner Cocktails!

How should you make this cocktail? Well, there are three must-haves in a Cuba Libre: rum (and I prefer a light rum for mine, but dark rums also have their place with this cocktail!), fresh lime juice (YES! Must be fresh!), and coke. Oh–be sure to save a lime segment for garnish! I generally go for a 1 and a 1/2 to a 2-ounce rum pour. Serve your Cuba Libre in a tall glass. ¡Buen provecho! Enjoy!