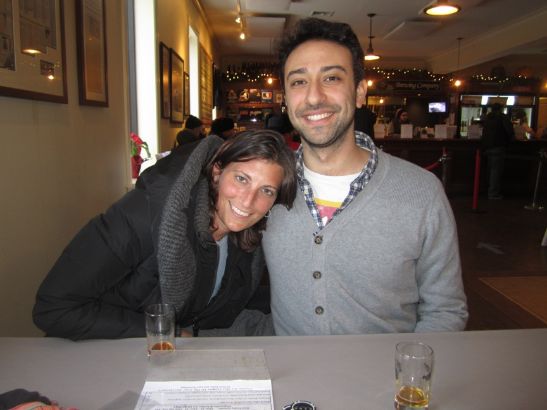 Jordi Bayer and Sammy Saba, without a doubt, had a better breakfast than you.

While the cold snap dissuaded many from venturing out on the weekend, the New York City pair took it in the opposite direction, schlepping to Dover Plains in Dutchess County for a special maple-themed breakfast on a maple farm—pancakes, maple bacon, maple butter, a variety of different syrups.

“I like to do activities like this,” says Jordi. “I’m lucky my boyfriend will do them with me.”

Already out of the city, and with the afternoon wide open, the pair headed down to Captain Lawrence, which they had read about in Brooklyn Magazine some time ago. “We needed something else to do today,” says Sammy.

They’re a few months too late for the Kevin’s Bacon Ale, a maple-infused brew Captain Lawrence featured over the summer. But Sammy likes the Hop Commander IPA and Jordi digs the small-batch bock cheekily titled I’ll Be Bock. (Feel free to make up your own Schwarzenegger/The Fermentator joke here.) But Jordi really likes another pilot system brew with a funny name—the blueberry berliner weisse called Snozzberry. It may be the best thing she’s tasted all day.

“That, or the maple butter at breakfast,” says Jordi. 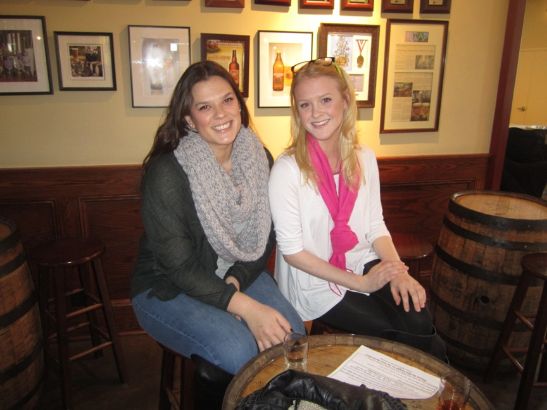 Being the most important meal of the day and all, breakfast also factored in to Lauren Ackley of Thornwood and Betsy Farrell of Hawthorne ending up at Captain Lawrence. Betsy was chatting with her sister over breakfast, and the two discussed celebrating her little sister’s upcoming 21st birthday at the brewery. Captain Lawrence is something of a home away from home for the Farrell clan. “My parents dwell here often,” says Betsy.

She’s sipping the I’ll Be Bock, a malty, strong lager, while Lauren has the Hop Commander. “It’s heavier than my usual Kolsch, but it’s good,” says Lauren.

Behind the bar, Doug adjusts some of the bumps and bruises from the previous night’s birthday celebration, while Jack perfects his annunciation for the 3 p.m. tour announcement. 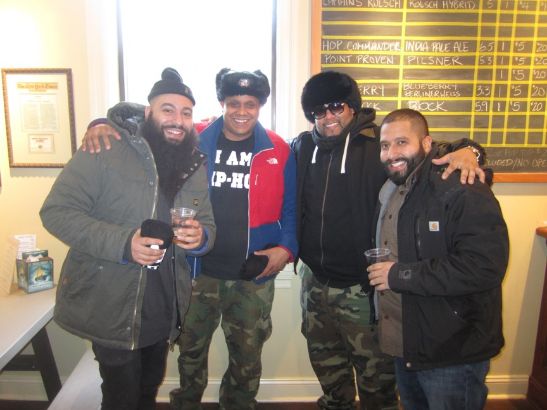 Up near the bar, Nino Hernandez of Brooklyn has the same attitude as Betsy about the frigid temps. “I was born in New York,” he says. “It is what it is.”

Nino and Andy Ureña are partners in a sports bar down in Williamsburg, Brooklyn called the Kings Tavern, where Lock Inn used to be on Grand Street. At Kings Tavern, the Captain’s Kolsch joins the Queens craft brewery Bridge and Tunnel and other tasty selections. “All craft and local,” says Nino.

They’re sampling beers with the Captain Lawrence sales rep, Rob Reeves, and wondering what else might fit in the tap lineup. Andy goes for the Hop Commander, Nino the Kolsch. “Easy drinking,” Nino says.

Nearby, Tyler Setaro of Millbrook in Dutchess County and Clara Burlinson of Fairfield County are enjoying some easy drinking after a serious setback. The pair had planned to visit Captain Lawrence for the first time the day before, arrived in the parking lot, and realized Clara’s wallet was in a deli back in Millbrook, a good hour back up the Taconic.

“Money, a bunch of cards, my life,” says Clara of the wallet’s contents. 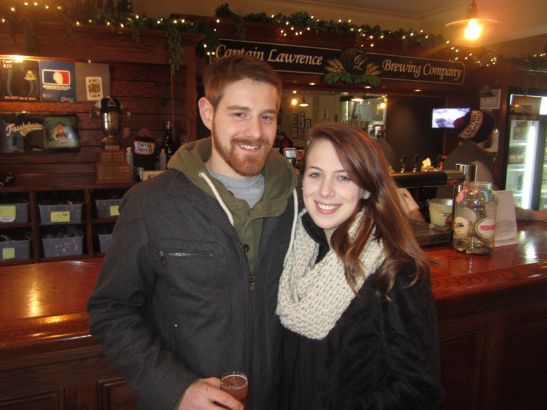 Fortunately, a Good Samaritan messaged Clara via Facebook to let her know it was safe.

A day later, her wallet in hand, Clara and Tyler set out for Captain Lawrence again, and were there not long after the doors opened at 1 p.m.

Clara enjoys the Point Proven pilsner, made of malts from Holland and hops from Germany. “It’s light but flavorful at the same time,” she says. Tyler quaffs the Snozzberry, but is partial to the oldest and best known Captain Lawrence concoction. “Freshchester is my go-to,” he says of the flagship pale ale. “I gotta do it.”

A hard lesson learned, Clara clings tightly to her wallet. If it comes out at all today, it may be to buy a six-pack for the wallet finder back in Millbrook.