People are reading
You are at:Home»Columns»Seasonal Chef: Fighting a Cold with Chicken Noodle Soup and Love

Dreary January is upon us. The holidays are over, decorations packed up and two months ‘til Spring. Colds seem to be everywhere. I was on the Metro North a few days ago and heard someone behind me sneeze. Then came home to a sick husband. Lucky for me I rarely get sick, and when I do, its on a day off. (Maybe that’s unlucky? Ha!) What’s the old saying? Feed a cold, starve a fever? I’m not so sure about that, but what I do know is that nothing hits the spot like a big glass of orange juice and a nice steaming bowl of chicken noodle soup when you are under the weather. Chicken soup is reputed to be the dish to help get you through a nasty cold. Of course that is anecdotal, but who cares? There is just something so magical about the aroma, the soothing familiar broth and slurpy egg noodles, that makes the aches and pains subside, even if it’s just a little while.

Everyone has their version of a great chicken noodle soup. I’m not about to challenge the laws of physics in any grandmother’s kitchen, but want to share my version. I’m happy to say it does the trick in Casa Reina, and even got a big thumbs up from a dear friend who’s husband was fighting throat cancer several years ago. 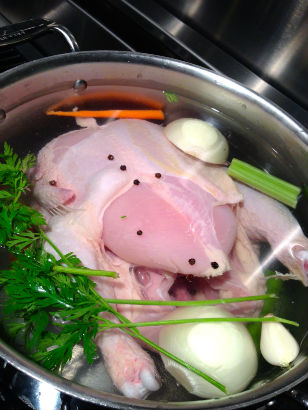 In keeping with my Seasonal Chef mantra – delicious, easy and fast – this soup will fit the bill. First things first: you need a chicken. It’s doesn’t have to be big, but I would encourage you to spend a little more and get an organic bird. Three pounds is just fine. Place it into a small pot with cold water and some aromatics. You want to just barely cover the chicken, so two quarts of water should do the trick. Once up to a boil, lower the heat and simmer for about 20 minutes. 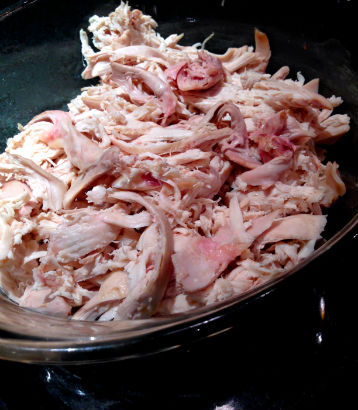 Turn off the heat and let the pot cool for about 15 minutes. Pull the chicken out and let that cool for about 15 minutes, or until you can handle it easily. Remove the skin and shred the chicken. Don’t worry if some of the meat is not fully cooked, it’s going back in the broth shortly and will finish. You should have about four to five cups of meat. 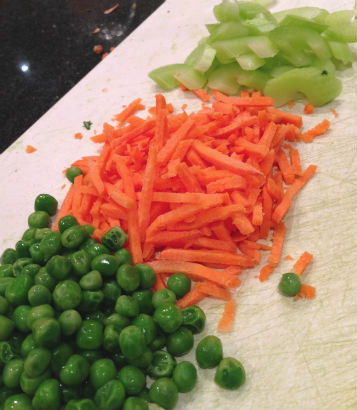 While all that is happening get your other ingredients lined up and ready. 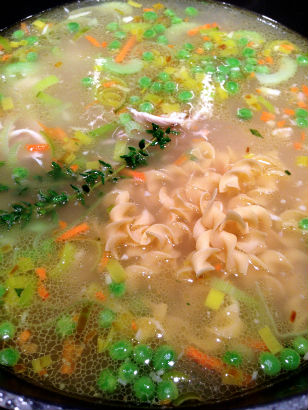 Using a fine mesh sieve strain the broth and discard the aromatics. In the same pot saute the leeks and garlic and then add about six cups of broth and a couple of thyme stems. You will have more liquid, but add as needed. You want to have a nice ratio of liquid to ingredients. Once you start to simmer add everything into the pot, including the noodles and set the timer for seven minutes. Once the noodles cook check your liquid ratio. You might need a little more to balance it all out. 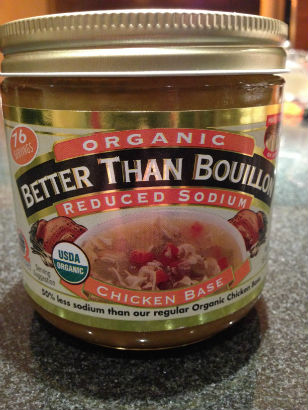 Now for my “secret” ingredient. OK, I hear collective sigh out there. Here is the deal: if you are prepared to let this broth simmer for several hours, then take the chicken bones after you remove most of the meat and put it back in the pot. Then you can skip the boost. Want to know how restaurants have the most amazing stocks? They simmer them for hours and hours. Most home cooks just don’t have that luxury. You also noticed I didn’t mention my typical notes of “taste and season.” This booster, though lower in sodium, will help in that category. Start with one tablespoon, swirl it in and have a taste. I ended up using two tablespoons, but you decide. Be sure to add a little pepper and finish it with fresh parsley. 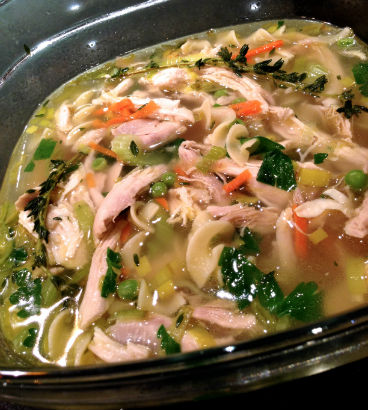 So there it is, my special version of: Chicken Noodle Soup. From start to finish it’s going to be about an hour and half. Can you open a can faster? Of course. Or buy it at the store? Of course! But will this version, made from scratch, made with love for your loved one, mend them a little faster? Of course!

One year ago: Amaranth
Two years ago: Meyer Lemon