People are reading
You are at:Home»Recipes»Main Courses»Beef»Seasonal Chef: Homemade Broth is Really That Easy

There is a lot of buzz these days in the food world about broth. It all seems to have started back in October when Chef Marco Canora launched a take out window called Brodo in NYC. “Brodo” the Italian word for cooking broth, is something we all know. Brodo, the take out window, is adjacent to his restaurant Hearth at the corner of 12th street and 1st avenue. After reading another article about it in Eater last month, I decided I needed to see what the buzz was all about. Honestly, there is nothing better than a good broth. So my hopes were high, knowing Chef Marco is an amazing chef. Making homemade broth is actually very easy, though on the surface it might look daunting. (More on that later!) So after work on Monday I walked over to Brodo to have a taste. 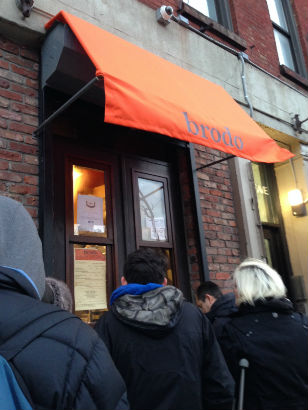 I got to the window at about 5:00, and there was already a line with about a half dozen people. 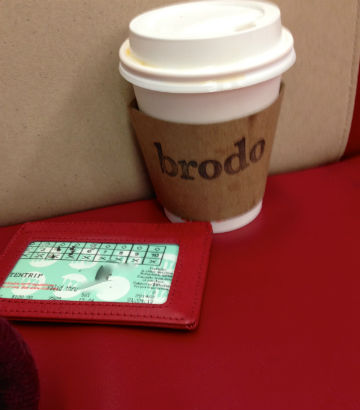 I opted for the Organic Chicken Broth and added in Calabrian Chili Oil and Ginger Juice. I sipped it on the train home and 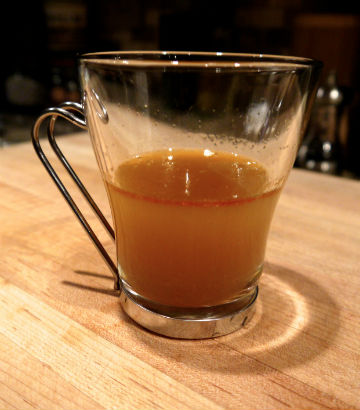 finished it later in the evening. It was really delicious, and really hit the spot on a cold evening! 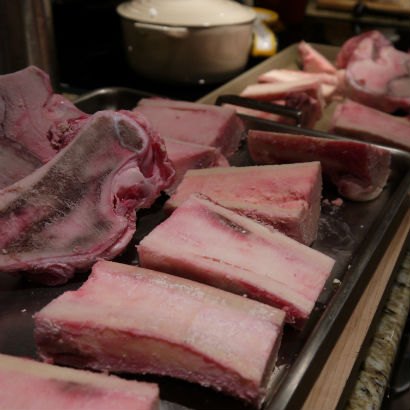 So how does this all work? First you need to start with bones. I purchased mine from Tarry Market. You need to do a little pre-planning as Chef Patrick will have to order them. Plan on doing that a few days before you cook. You can also check with your local butcher. You need a combination of beef and veal bones. Five pounds of bones will yield about 2 quarts of broth. 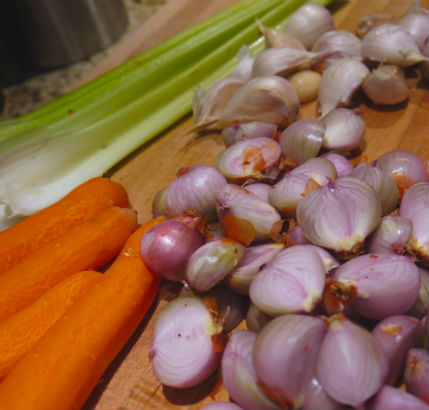 In a 450 degree oven you want to do a first roast of the bones for 30 minutes. While that is happening get your aromatics prepped: 1 cup each of carrots, celery, and shallot, chopped in about 2″ pieces. Take one head of garlic and break it up. 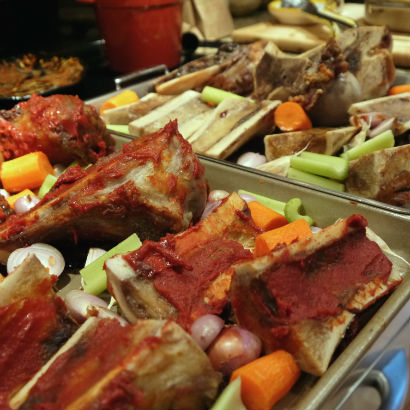 Once the bones come out after the first roast you have two options: either smear them with a small can of tomato paste, or not. The tomato paste absolutely adds a level of flavor intensity that can not be denied. I decided to do it both ways and for the bones without paste I opted for adding a piece of ginger. Whichever way you decide add the vegetables and place back in the oven for another 30 minutes. 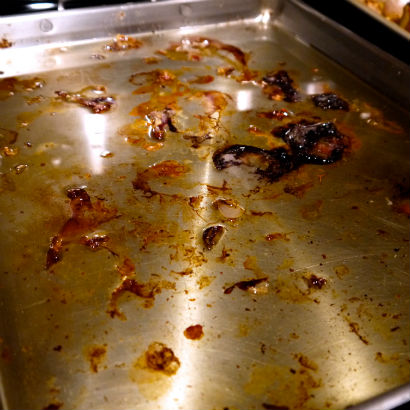 After your second roast pick out the bones and vegetables and place them in a very large pot. Pour off the fat 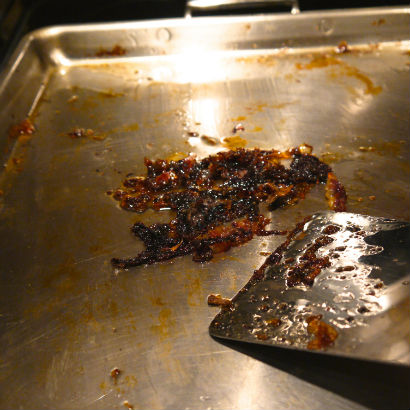 and scrap up the fond bits. Add the bits to your pot and cover with water. You will be adding about 12 cups of water, more or less. 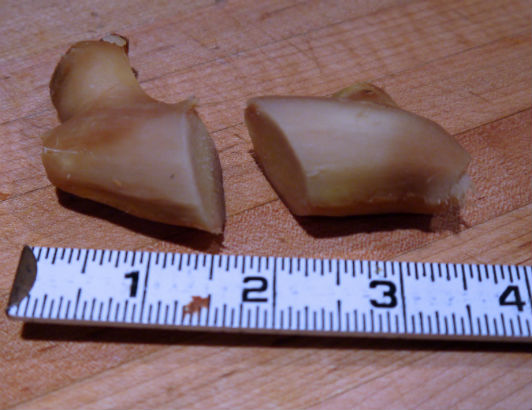 It was at this point I added the ginger to the non-pasted bones. Bring the pot to a simmer, lower the heat so it just ever so slightly bubbles and walk away. Let it go for at least 10 hours. 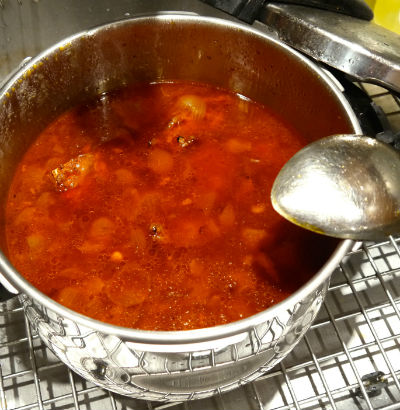 I decided to also do a test with part of the bones in my pressure cooker, and that worked pretty well too. While not nearly as intense as the 10 hour simmer, my one hour on low pressure with a low burner worked nicely. So that is an option to consider. 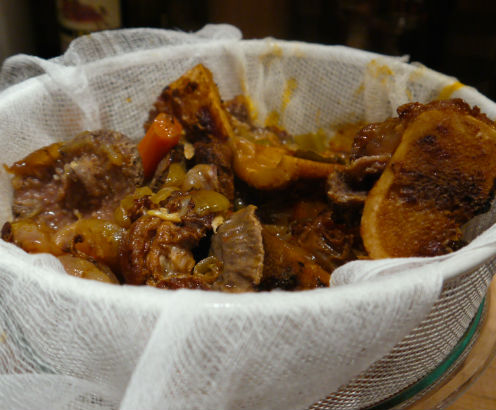 After your long simmer simply strain the broth and that’s it. Season when you are ready to use it. 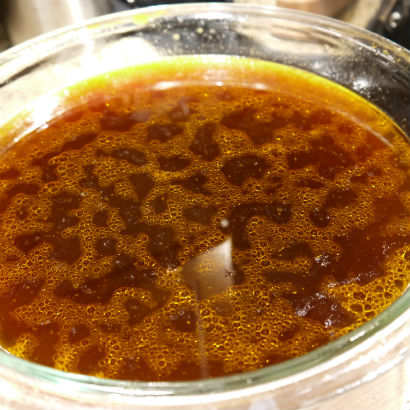 This was my pressure cooker version using pasted bones, 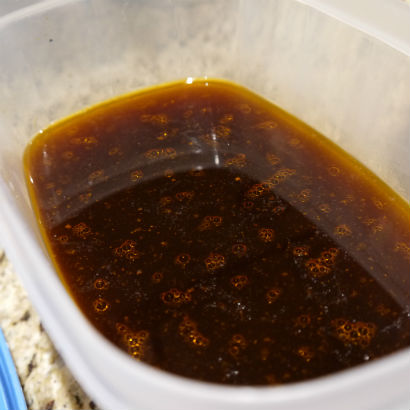 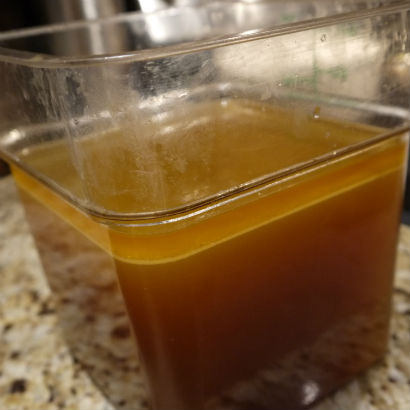 and my ginger version with non-pasted bones. 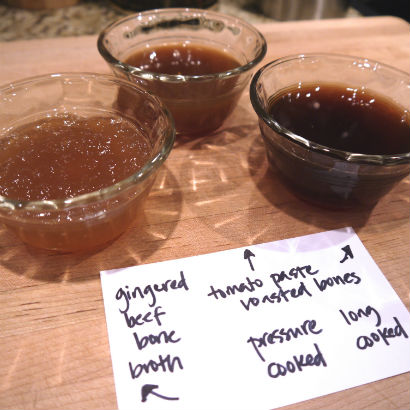 All three were just outstanding. Plus, the house had the most amazing aroma all day long. Can you open a can easier? Of course. Can you buy it at Brodo? Of course. Can you make it at home? Absolutely! And I guarantee you will be very pleased with the outcome. That said, I also read an article yesterday, written last week by Mark Bittman showing an even easier way to do broth on the fly. The takeaway from all this is to try to make it yourself. It will be fresh, without a lot of additives and contain the amount of salt you designate.

Just yesterday there was another article written about Brodo in Food Republic, which is a fun read. If you find yourself in the East Village one of these days I highly encourage you to stop by the window and have a cup. Even better, try making it on your own one weekend. The whole process is just wonderful, and really not hard at all. The end result is a delicious batch of homemade broth sure to make everyone in your family very, very happy.