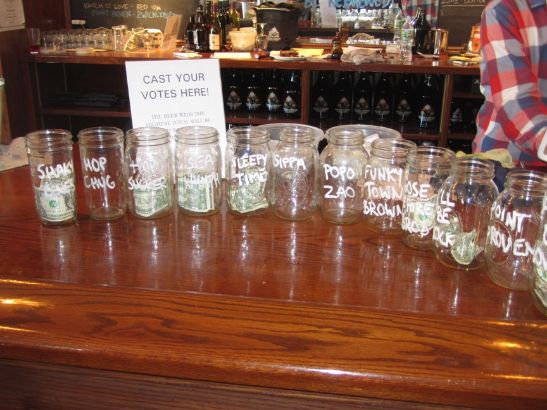 The Super Bowl is a week away, which means it is time for the Captain Lawrence Hop Bowl, pitting a dozen memorable small-batch brews from the past year—staffer-created concoctions such as the chamomile-infused Sleepy Time Saison, the session IPA Hop Chug, the porter Funky Town Brown—against each other for bragging rights. It’s a democratic process; each beer has its own mason jar, and the tasting room visitors vote by dropping a dollar, a chip, or another token of respect in the jar.

By 2 p.m., the espresso stout Shaky Bones has the lead, but we all know those exit polls can be misleading. “It’s still early,” says beertender Jack Reilly.

A foursome from the River Towns would have no problem seeing a stout take the title. Millie and Pedro Ceron are from Tarrytown, Lourdes Lebron (“Like the basketball player,” she says) is from Briarcliff, and Peter Blass is from Irvington. They are smitten with a deep, dark, potent brew called the Frost Monster imperial stout. “It’s my baby,” says Millie. “It’s…just right.”

(Notably, Frost Monster is one of the few brews to start off in the pilot system—the brewery’s minor leagues—and make it all the way to 12 ounce bottles for sale in stores.) 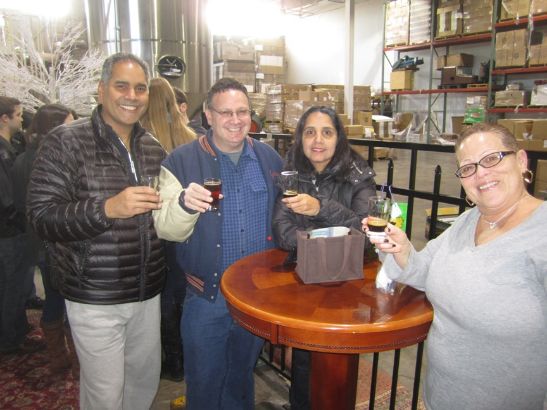 Millie and Lourdes usually come on Fridays but happened in on a Sunday when reading about the Hop Bowl on Facebook. “It’s some of the old, some of the new,” says Millie of the pilot system selection.

Peter likes one of the newer entries—the strong lager I’ll Be Bock from Scott Tobin. “Nice body, doesn’t have the aftertaste of an IPA,” he says.

For Pedro, it’s the Shaky Bones, authored by Justin Perrone. “It definitely has a coffee presence and it’s got some hops, but it’s beautifully balanced,” he says.

Meatloaf is cranking out of the house speakers, perhaps a first in Captain Lawrence history. There is talk of Snowmageddon—the forecast seems to increase by six inches with every passing hour—and of who will win the Super Bowl. Scott Bixler of Verona, New Jersey likes the Seahawks. Actually, he dislikes the Patriots. “I went to school with a lot of people from New England,” he says. “I prefer Seattle.”

Wife Kathleen shrugs her shoulders. “I don’t care,” she says of the big game. 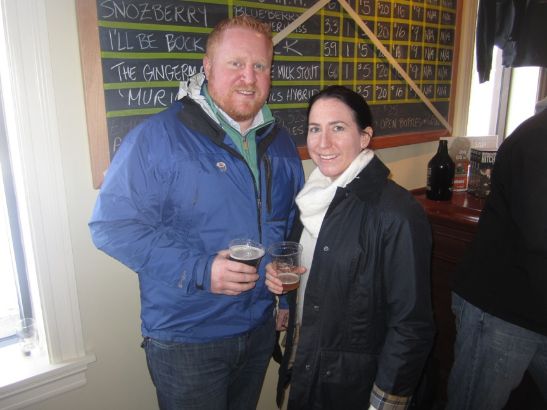 The two were stuck at home in the snow the previous day, but ventured out to Ridge Hill on this day, and decided to complete the excursion at Captain Lawrence. Kathleen likes the session IPA known as SIPPA, while Scott digs the red IPA called Batch O’ Love. Here’s a cool story about that beer: Mark Batchie, who handles the plumbing around the brewery—a vital role at 444 Saw Mill River Road–whipped that up to serve at his wedding, at Captain Lawrence, in September.

Scott plans to leave with a growler for his twin brother, a gift to mark the birth of his brother’s baby. The Batch O’ Love may be the pick. “It’s the front runner,” Scott says. 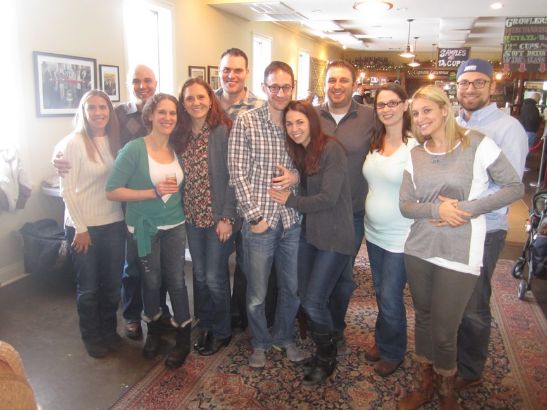 Speaking of brotherly love, there’s a sizeable party gathered around a table in the tasting room—guys and gals enjoying samples and each other’s company on a sunny day. In fact it’s a birthday celebration, albeit with a bittersweet twist. Pete Kirschner of Stamford and bro Dave of Hoboken gather a crowd every year to mark the birthday of their brother Matt, who died from cancer in December 2013. They’ve mourned the loss, but the brothers—and a giant group of Matt’s old friends and loved ones—would much rather toast his memory these days. “Matt enjoyed life,” says Pete.

Dave sips the Batch O’ Love and Pete the Sea Nymph calypso pale ale; he seems to enjoy the beers’ funky names as much as the brews themselves. “The names are killing it,” he says.

UPDATE: Love Conquers All! The Batch O’ Love took the title, with Shaky Bones in second. 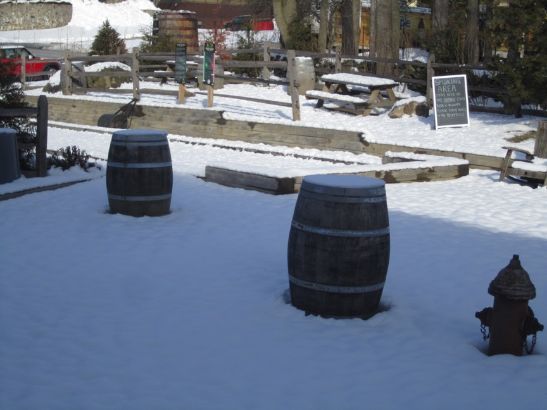 After the snowstorm. Not THE snowstorm, but that dinky one last weekend.