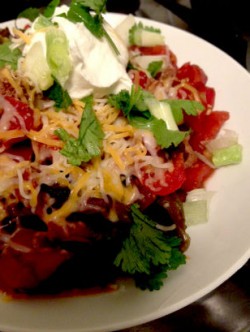 As you know, my friends, stews come in all different varieties. Add chili to that mix, and you’ve opened a whole new dimension.

Chili is perfect on chilly (!) days…add some snow, and some stout, even the Super Bowl, and wow, you’ve got yourself a winner! So this one, my Chorizo, Chipotle, Black Bean and Stout Chili was inspired by coolish days, chorizo, and Broken Bow Brewery’s Broken Heart Stout. The result is a stew of warming layered flavors and a one-dish dinner perfect for stay-at-home snowy evenings! As always, amigos, you can vary the one according to have you’ve got in house, and what your preferences are. Also, this chili can be served with rice (I like it with yellow rice!) or on its own. Ah—for a super short cut/time saver, you can use excellent quality canned black beans. Also, for my vegetarian friends, this chili holds onto flavor even without the meat. Have fun—and play with your Chorizo, Chipotle, Black Bean and Stout Chili. And do let me know how you like it! in the meantime,  !Buen provecho! Enjoy!

This colorful and easy quinoa chicken pilaf is a favorite in our house, give it a try and you will like it too!

Toast cumin and coriander in skillet over medium heat until darker and beginning to smoke, about 4 minutes. Cool.

Heat half the oil  in a large skillet over medium-high heat. Add the garlic, onions, all bell peppers, and jalapeños. Add half a can of the beer. Sauté until vegetables begin to soften and the beer is absorbed, about 15 minutes.

In a large heavy pot over medium heat, sauté the beef and sausages in until the sausage is browned, and the beef is no longer pink, breaking up with spoon, about 8 minutes. Add the other half can of beer, and cook until it’s absorbed.

Add the peppers to the pot with the meat. Mix in toasted spices, chili powder, and chipotle puree.

Add the tomatillos, crushed tomatoes, beans, and about half a can of beer (or more! OR you can drink the other half while you cook!). Bring the chili to boil, stirring occasionally. Then reduce the heat and simmer for about 20 minutes, stirring often. Season with salt and pepper and as needed.

Ladle the chili into bowls. Serve with sour cream, scallions, cilantro, and cheese—and a squeeze of fresh lime.