People are reading
You are at:Home»Restaurants»Openings»Meetinghouse in Bedford will become Bedford 234 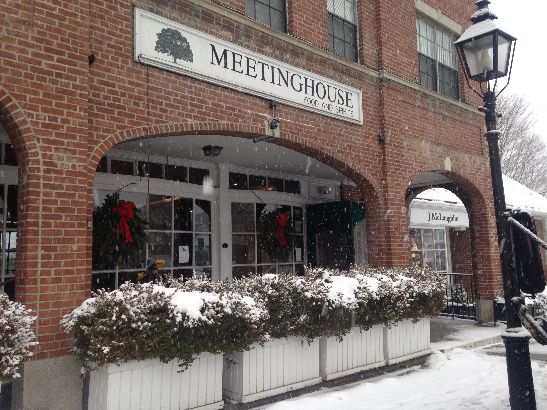 The Meetinghouse in Bedford, next door to the now defunct Bedford movie theater, is undergoing a major renovation and will open soon as Bedford 234, a comfortable farm-to-table bar and restaurant.

“Meetinghouse had not been changed in a long, long time,” says new owner, chef Tom McAliney. “We put up a lot of reclaimed barn lumber and had tabletops made from that.”

McAliney also removed the old bar and put in a new L-shaped one that’s pushed back a little from where the former stood. It’s topped with a sleek, white Brazilian marble and seats seven.

Expect American-style dishes similar to the comfort food served at the Meetinghouse— handmade pasta, pizzas, lots of specials— only a bit more rustic and with an emphasis on local farms.

“At Point of View Farm, he’s raising all the lambs for us, and Real Live Food Company is going to be making some beer cheese,” says McAliney, who spent seven years raising cattle in California before returning east to open a restaurant. He’s joined by partner Mitchell Samberg, whose wife Lynn is the creative force behind the renovation.

The old hutch behind the bar was removed, and replaced with neat shelving and taps for craft beers, barrel-aged cocktails and wine. There are plans to install a bench facing the window for additional bar seating.

“The space is more open and free flowing,” he says. “A lot cleaner.”

Bedford 234 is slated to open in late February.