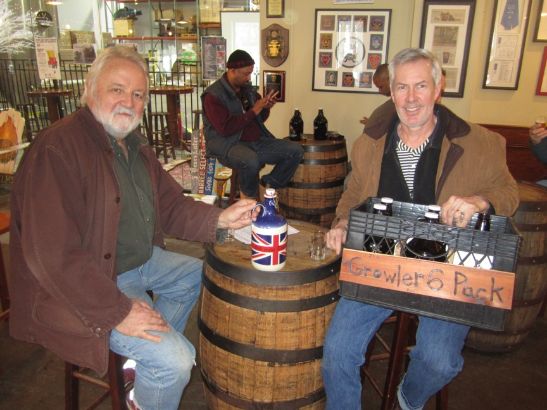 When we last saw Simon Ellis, it was considerably nicer out. He was on the patio. The sun was shining. He was contemplating exactly which beer should be chosen to deflower the finest growler in the land. It was a retirement gift from his son in law, a ceramic work of art adorned with the flag of Simon’s native United Kingdom.

On this day, he was again looking to fill the jug, hours before Super Bowl kickoff.

Retirement has been “wonderful”, Simon said. “Besides drinking beer, I’ve been building a house, hiking, I play a little tennis,” he added. “The days get filled.”

So does the growler; it may be the Just Ryght Rye IPA he was enjoying alongside pal John Andersen, also of Katonah.

While Simon had the coolest growler, John had the best growler-hauler—a converted milk crate built to transport six jugs, with a built in sample-glass rack riding side saddle. “I always get a few growlers, and I’d always forget my glass,” said John. “It just works.” 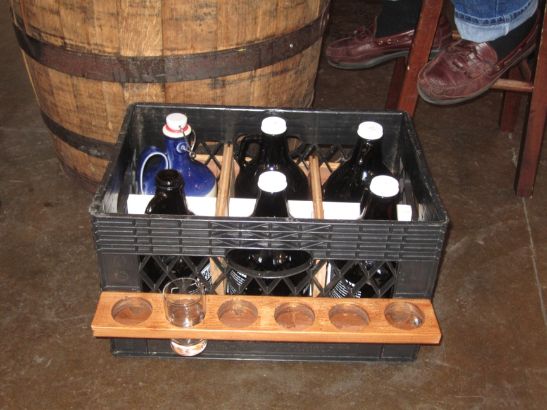 All the Seussian contraption needed was a name. The Pourter? Crate Expectations? Hop To It? That, and some shoulder straps, added John.

Also filling up the growlers were Tracey Koch and Cindy Richardson of Tarrytown. “Our husbands don’t need to because we are,” said Tracey, music to any husband’s ears. It was the Liquid Gold and the Freshchester Pale Ale for their 64-ounce vessels.

Cindy was cheering for the Seahawks, because the Patriots, quite simply, “cheat,” she said. Tracey, like many in New York, was rooting for “my numbers in the pool to come up.”

Emily Barry of White Plains was similarly disinterested in the Bowl. She was headed to a party, but seemed more interested in the food, the beer, the commercials. “I’m not watching,” she said defiantly. (While it turned out to be a thrilling game, for many in the tasting room, the highlight may have been Budweiser calling out those fancy craft brews in a commercial.) 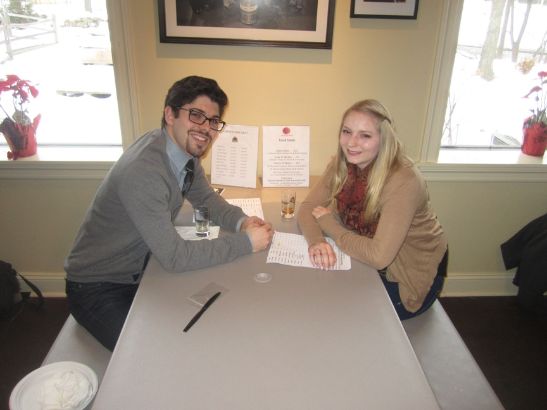 Rocking a necktie, perhaps the first in the Captain Lawrence tasting room since County Exec Rob Astorino rolled in for an IPA, A.P. was clearly the best dressed guy in the room. “Dress to impress,” he said. “When you don’t have muscles or tats or scars, you dress to impress.”

A.P. had his heart set on a brewery tour, googled local breweries, and “found a wonderful brewery tour in my backyard.” Alas, he and Emily missed the call for the 4 p.m. tour, and will have to wait another week.

In the meantime, there were beers to sample. Emily had the Liquid Gold, A.P. the Hop Commander IPA. “I recently got into IPAs,” he said. “I like the complexity of the flavors.”

Nearby, Howie Ciarcia of Port Chester has been on a few Captain Lawrence tours in his time. He’s a CL “groupie,” he said, dating back to the brewery’s Pleasantville days. These days, his beer of choice is something of a dark horse—actually, a Brown Bird Ale, to be specific. “It’s flavorful but not too heavy,” Howie said. 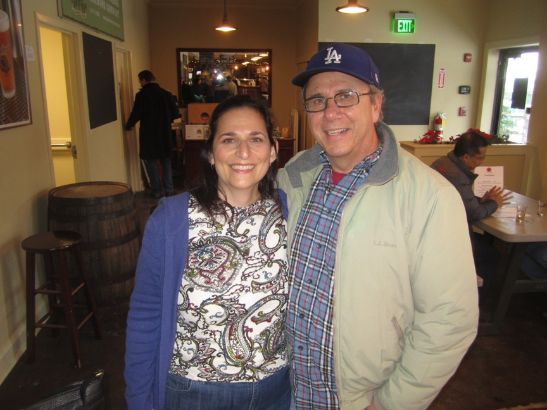 He and Debbie Bunnell, also of Port Chester, were headed to Howie’s brother’s house for the big game. Debbie disliked the Seahawks a little less than the Patriots. “Seattle is arrogant, and New England is a cheater,” she said. “Being arrogant is part of the game. Cheating is not.”

Indeed, for many, choosing between the Patriots and the Seahawks was like choosing between a headache and a stomach ache. Howie spoke for many with his pre-game assessment: “I don’t like neither one.”