It’s cold out.  I know, call me Captain Obvious.

There’s something to be said about the cold weather, and that’s the tendency to make us want to curl up indoors with a nice hot bowl of soup.  I mean, everyone is eating lots of soup right now, right?

I’ve been making probably a pot of soup every week for the better part of the season thus far, but there are some soups that you just get tired of.  One trick to help is to freeze portions of soup so that once you’re a couple of weeks in, you have a variety to choose among from the freezer.  Another is to make very quick single serving soups.

Miso is a fermented paste traditionally made with salt, soy beans and a rice inoculated with koji, a fungus.  It can be made with other beans and grains.  It’s fermented over a period of usually at least a few months to a couple of years, and keeps for a very long time in the fridge.  You can buy miso at most grocery stores and there are a number of varieties.  Last spring, I went to a miso making class in Brooklyn– a couple of months ago, I opened up the jar that I had made and had been fermenting in a kitchen cabinet for several months, and it’s quite nice.  It’s on the mild side and mellow, making it great for a variety of uses- but largely, I’ve been making soup.

The single-bowl soup is a wonderful thing.  This means you can make a unique bowl of soup any time of the day you want, and it will be ready in about 10-15 minutes. 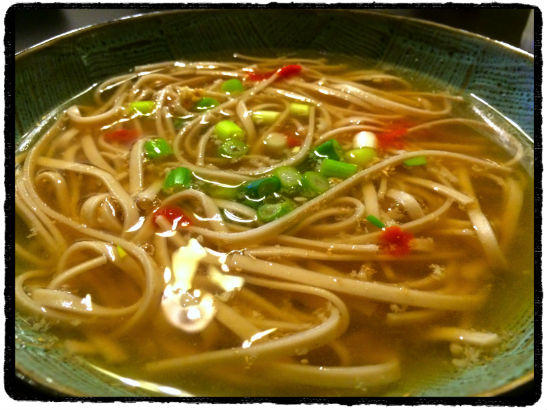 Udon, miso, ginger, scallions and garlic in this bowl!

To start, you’ll want to settle on a noodle.  Udon, soba, ramen, shirataki, and rice noodles are all great choices (udon has been my go-to recently), but you could use spaghetti in a pinch!  Prepare your noodles according to package directions.

To make your broth, it can be as simple as taking about a 1/2 to 1 tablespoon of miso (more or less to taste.  Less if you’re worried about sodium) and adding 1.5-2 cups hot (but not boiling water) and mix to dissolve the miso.  If you’d like, you could certainly add a piece of kombu.

You could stop with just these.  Lately, I have been adding a chopped scallion, some grated ginger and either minced fresh garlic or garlic powder.  For someone who likes mushrooms, this would be a great place to eat them!  Note, you could mix scallions, garlic, ginger and mushrooms to miso paste, mix up and keep in the fridge to use a tablespoon at a time as needed.  It will keep at least a week like that.  Instead of adding these, sometimes I add kimchi.  You could add sliced greens, like chard, kale or spinach for a very different taste and experience.

You also have the option of adding a plant based protein- sliced seitan and tofu work well.  I’ve found that a handful of frozen edamame can be nice as well, though you’d want to add those to the miso/hot water right away to give them a chance to cook (or alternately, steam or blanch them separately).

The possibilities are endless with this!  Especially if you’re cooking for one, it’s easy, relatively healthy, and offers variety.  It’s perfect for any time of day- I probably eat this most often at breakfast!

I hope that you get a chance to try something warm and tasty if you’re stuck in the snow this week!