Shamrockin’ In the Free World 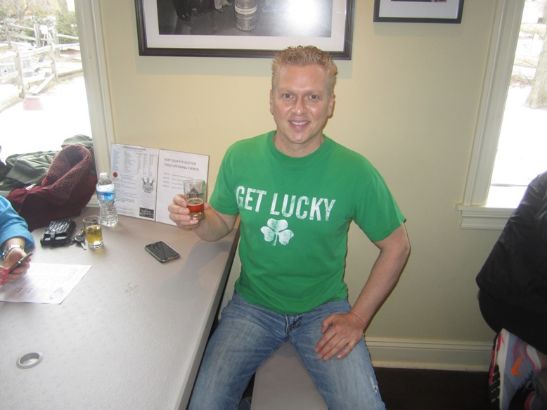 It is that lull on the calendar—St. Patrick’s Day not quite here, and Pi Day a recent memory. Pi Day, celebrating the extraordinarily rare occurrence of 3/14/15 on the calendar, was a surprisingly big day around the Captain Lawrence tasting room, the guys awarding growler-fill cards to lucky guests to mark the special occasion.

If there was an award for the furthest distance traveled, it would easily go to Ben Rodenbeck and John Rector, of Indianapolis and Muncie, Indiana, respectively. John did his residency at Helen Hayes Hospital in West Haverstraw last year, and is back for a visit, Ben in tow. They hit a number of breweries, including Helltown of Pennsylvania and Wheeling Brewing Company of West Virginia, before arriving in New York.

“I lived here for a year and somehow never made it to Captain Lawrence,” says John, addressing that with a sample of Smoke Up smoked porter, while Ben has the Hop Commander IPA. 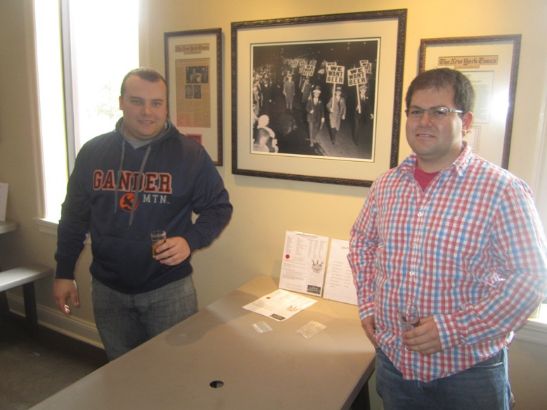 The two head out for the 3 p.m. tour, while Steve Verdino of Nyack and Alanna Myrick of Brooklyn stay behind. Steve found a couple Captain Lawrence sample chips at home, which prompted he and Alanna to pop in after hiking on Hook Mountain in Rockland County. Steve’s got the Frozen Flowers, a small-batch Belgian Ale brewed with elderflowers, while Alanna sips the Hop Commander.

Alanna spent one St. Patrick’s Day in New Orleans, celebrating her birthday. Steve marched in the New York parade during high school. But both are working on Tuesday, and haven’t given much thought to March 17 revelry. “Ten years ago, I would’ve,” says Steve with a smile. 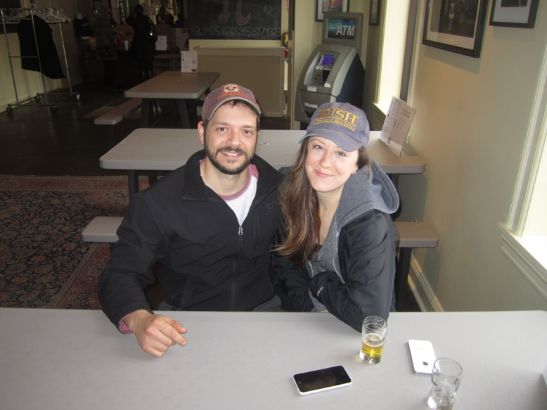 Similarly, St. Pat’s is not top of mind for Sean and Brandis Cuevas of White Plains; both too will be working. “I may make a good Irish meal,” says Brandis. “I actually don’t know if it will be good, but I will try.”

The couple has been into wine, and wine tastings, for years, and more recently developed a love for craft beer. They tasted some Captain Lawrence at Hudson Grill in White Plains, and decided to check out the brewery. “I love the whole culture of beer,” says Brandis. 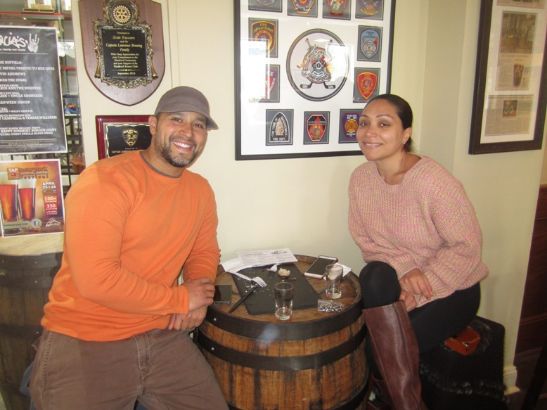 She’s got the smoked porter—“rich, thick, stouty, malty,” she says, with some bacon hints. Sean calls the Captain’s Kolsch a “beer beer”, and digs the Frozen Flowers too. “My expectation after reading the description was, ‘eh,’” he admits. “But it’s crisp and light, with just enough hops and a nice aroma.”

So will no one celebrate St. Patrick’s Day with a few pints in an Irish pub while wearing their green finery? Not hardly. Jay Murrin already has his shamrock t-shirt on. Living in Woodlawn (“County Woodlawn,” his mother calls it), he’ll be at the 60th annual Yonkers St. Patrick’s Day parade March 21. “It’s gonna be packed,” he says. “You see people you haven’t seen in years.”

His friend Brendan Smith, a former mounted NYPD officer, saw a number of New York St. Patrick’s parades from atop his horse. He says the most popular figures in the parade weren’t the Irish step dancers or the pipe bands, but the sanitation guys with the shovels, trailing the horses and keeping things clean and sanitary. A fan of the Liquid Gold, Brendan is trying something new with the pilot-system tangerine wheat ale called Twang. “I don’t know that I’d drink it all night, but it’s a nice palate cleanser,” he says.

Jay is sampling a variety of pale ales and thinking about a Guinness or two on the parade route along Mclean Avenue this coming Saturday. “It’s fun. It’s fun,” he says with a broad smile. “It’s a lot of fun.”