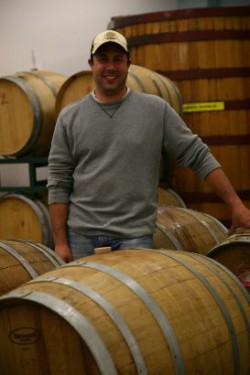 Every few months, Captain Lawrence releases a limited batch of specialty four-packs of very unique beers. This time around, it’s the Seeking Alpha triple IPA. That’s right, triple—we’ll see your imperial IPA and raise you another blast of hoppy goodness. It’s a big, bitter monster of a brew; the Village Voice rightfully called this 11% alcohol beer “a palate-smashing beast of an ale designed for those times when a lesser IPA simply won’t cut it.”

Seeking Alpha represented Captain Lawrence, along with a few other not-quite-normal beers, at the Extreme Beer Fest at the Seaport World Trade Center in Boston March 20-21. Hosted by Beer Advocate, the Fest describes itself as “the ultimate throwdown of craft beer creativity. Join us as we celebrate brewers who push the boundaries of brewing and raise a fist at the norm.” 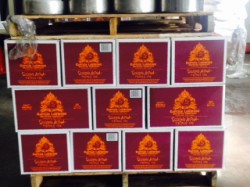 Two years ago, the fest was cancelled due to a massive snowstorm. As the boys headed out of Elmsford on Friday, the snow was falling in New York, but the show went on in Boston. Also making the trip–the Frost Monster imperial stout and some sour ales.

If extreme brews aren’t your thing, Captain Lawrence offers a variety of far more accessible beers. The newbie Effortless IPA (india pale ale), an easygoing 4.5% alcohol beer, makes its debut in early April. On up the hops scale, the Palate Shifter imperial IPA features new packaging and a new name, but the same heady, hoppy, fruity brew. Several beers are going through a rebranding; even the venerable Freshchester Pale Ale will get a new label and six-pack design, though the flagship beer, and its homespun name, will stay the same.

But another taproom standard may get a new name: the Captain’s Kolsch. Got any ideas for renaming the German-style ale?

Friday’s snow and this week’s chill notwithstanding, the fair weather is coming. That means outdoor beer consumption, including Tap New York at Hunter Mountain April 25-26, and the Captain’s own Tap & Pour birthday bash May 16. Tap & Pour encompasses the pig roast of years past, but there’s a wider array of food options, including victuals from famed Walter’s Hot Dogs, Gleason’s and The Cookery, in addition to the grilled swine. Bands will be set up in the brewery; Evan Watson plays the VIP hour at 2 p.m., with Phineas and the Lonely Leaves, Mark Sinnis and Space Bacon (yes, Space Bacon) among those performing. Tap & Pour celebrates Captain Lawrence’s ninth anniversary.

“We’re really trying to do it up this year,” says Scott.

Once the temperature climbs a bit more, there is the Captain Lawrence patio for bocce, cornhole, oven-fired pizzas and brews such as Sun Block, Brown Bird Ale, Liquid Gold and the funky pilot-system lineup. “We can’t wait to see people out on the patio again,” says Scott. “It’s been a long, cold winter.”