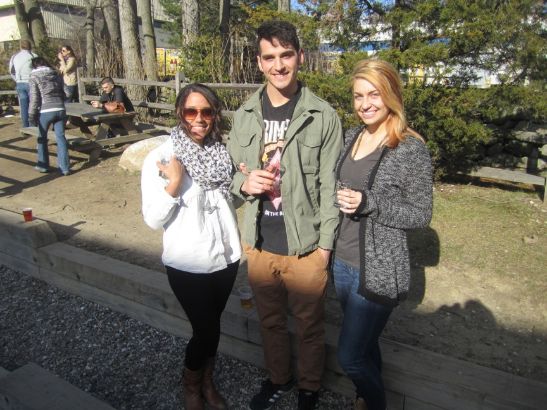 Windy and cool as it may be, it is truly the first time all season when one could sit on the Captain Lawrence patio in neither a parka nor a wetsuit. And so people did. There was the satisfying crack of bocce calls colliding, the Gleason’s grill was fired up, and people schmoozed and sampled local craft beers.

“It’s the first nice day of the year,” says Steve Martinez of White Plains. “We had to come out.”

Steve sips the Liquid Gold. His friend Matt McIntyre, who moved to White Plains from Nashville, has the small-batch brew aptly titled Spring Buzz—an easy drinking German-style Kolsch that goes well with sun and fresh air. “This is a good after-workout thing to do,” says Matt, who describes the 6.5% ABV Spring Buzz as “light, but still with some potency.” 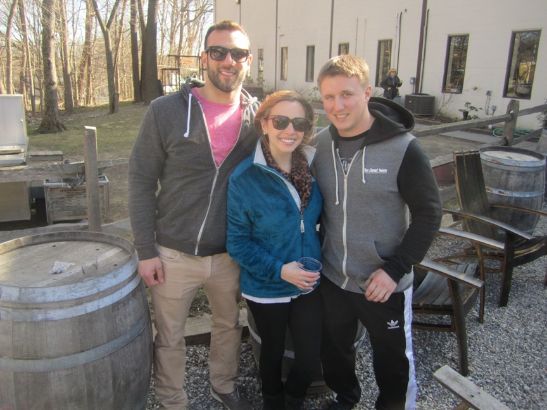 Steve’s sister Marissa has opted for a white wine from Prospero. Steve and Matt discuss March Madness;  Steve needed a win from Wisconsin to keep his bracket alive, and got it. Marissa would rather discuss something else. “She has as much interest in March Madness as she does beer,” teases brother Steve.

Dan Benett of Monroe, up in Orange County, and Nicole Miller of Montgomery, NY share a table in the sun with, fittingly, a couple Sun Block wheat ales in hand. Nicole discovered Liquid Gold around her upstate neighborhood and has been meaning to visit Captain Lawrence ever since trying that Belgian-style brew. “It’s been on my to-do list forever,” she says.

Dan is taking a pass on the whole March Madness thing, but with Major League Baseball’s Opening Day within reach, he’s stoked for the new and reportedly improved Mets this season. “If the bullpen can come through, we’ll be OK,” says Dan. Then he shrugs. “I’m sure by mid-May I’ll be disappointed.” 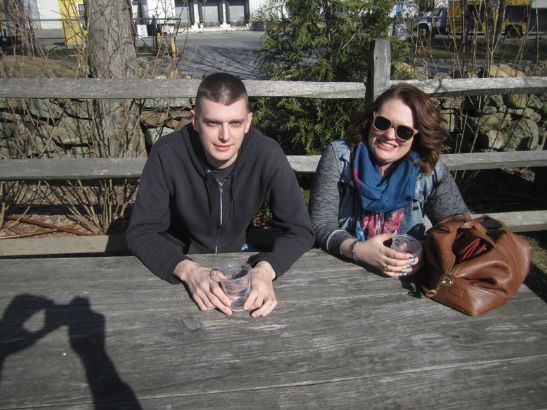 It is, alas, windy as heck. It’s warm inside the tasting room, and as always, a little more mellow in the fenced-in pen located in the brewery proper. Anna Louzeaux and Emily Moulton of Pleasantville have planned ahead for their trip to Captain Lawrence; one set of parents dropped them off, and the other will pick them up later. “It’s a playdate!” says Emily. “I feel like I’m 14 years old.”

(Here at “Notes”, we are always happy to spotlight examples of safe driving practices.)

There was no driving when Captain Lawrence was located in Pleasantville. Anna speaks fondly of hiking over from Sunnyside Avenue to sample a new brew or two and fill her growler. “I brought my two-year-old sister once,” says Anna. “She was a little freaked out…it was just her personality.” 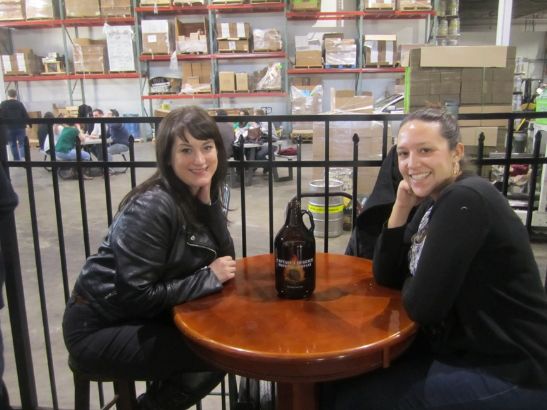 The perfect beer to go with nostalgia is the flagship Freshchester—the one that started it all for Captain Lawrence. Both ladies are enjoying the citrusy pale ale, and will likely leave with a growler full of it. “Freshchester is one of the few things I really proudly associate with Westchester,” says Anna.

Like Dan Benett out on the patio, both ladies are all-in for the Mets this season. “I grew up around a ton of Yankees fans,” Anna says, speaking for, oh, just about everyone who grew up in Westchester County. “That solidified my love for the Mets.”

Meanwhile, back on the patio, Dominic Schwanemann and Alicia Vogel take in the bocce action as their friends play. Part of a lively group, they took part in the tour, and are relaxing with a couple big and bitter Hop Commander IPAs. Both are Southern Cal natives living in Mount Vernon, and what’s warm to New Yorkers may not be so for Californians. “It will be better in a month,” says Dominic, “when we’re out here in t-shirts.”

But still, it feels good to, at long last, be outside. “It’s amazing,” says their friend Rachel Lang of Sleepy Holly. “I am so ready for this.”