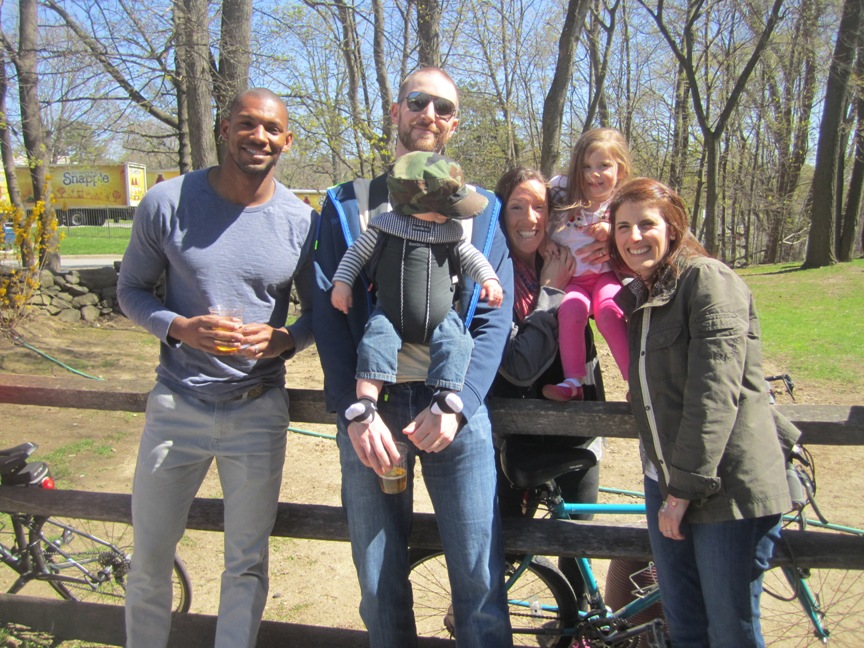 Tom Brady stretches out his 6’ 4” frame, scans the field in front of him, and fends off the attacker waving his arms in Brady’s face. He considers his options, and chooses the Hop Commander.

Alas, this Tom Brady lives in Armonk, and his baby Sean, tucked into the front pack, is the one in his grill. The other Tom Brady, well, who knows where that jet-setting Patriot might be.

“I get it once a day,” says Westchester Tom Brady of the quips about his namesake. “I’m used to it.” 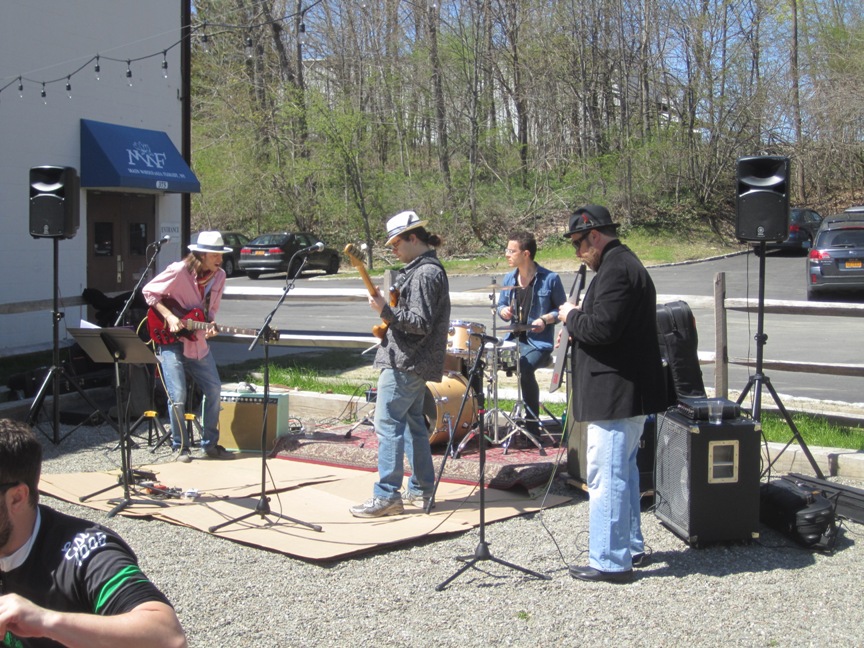 It’s a sunny spring day on the Captain Lawrence patio. The band Gridline is serving up a heady mix of blues and rock. Tom is there with his wife Michelle (at least it rhymes with Giselle) and wee Sean, while daughter Alex dances in front of the band. They have extended family visiting. “When we have guests in town, lots of times we take them here,” says Michelle, sipping the Sun Block wheat ale.

Michelle admits she’s not a major beer drinker, but enjoys the Sun Block’s crisp, citrusy bite. Having an almost famous husband, she says, has been full of surprises. “Marrying a Brady, I thought it would be mostly Brady Bunch jokes,” says Michelle. 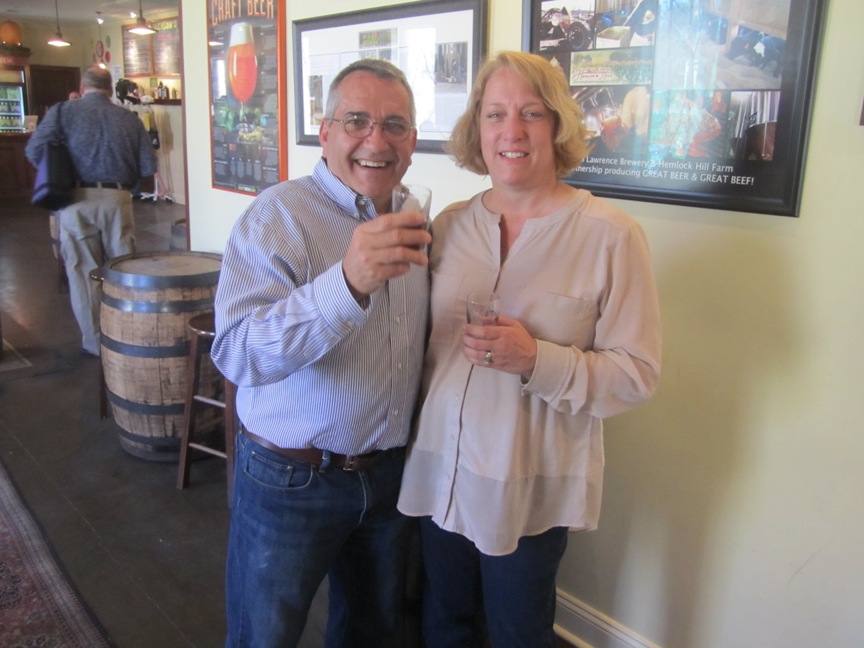 Inside the tasting room, AC/DC’s “Back in Black” cranks out of the speakers. Jack and Mary Leclair of Waterloo, New York, up in the Finger Lakes, would not mind having Tom Brady on their football team. Instead they got Rex Ryan. “We’re Buffalo Bills fans,” says Mary. “That’s why we drink beer.”

The couple is visiting their daughter in White Plains, and is meeting another couple from Danbury. “It’s really not halfway between us,” Mary says of Captain Lawrence. “But don’t tell them that.”

Don’t worry, Mary—your secret is safe with us.

She is sampling the German style Kolsch, while Jack has the small-batch brew Beam Me Up. “I don’t usually drink scotch ales,” he says of the smoky, malty beer. “But this is good.”

They rave about the craft beer scene up in the Finger Lakes, including Naked Dove in Canandaigua and Climbing Bines in Seneca Lake. “The Finger Lakes are really known for wineries,” says Mary. “The Beer Trail is just starting up.” 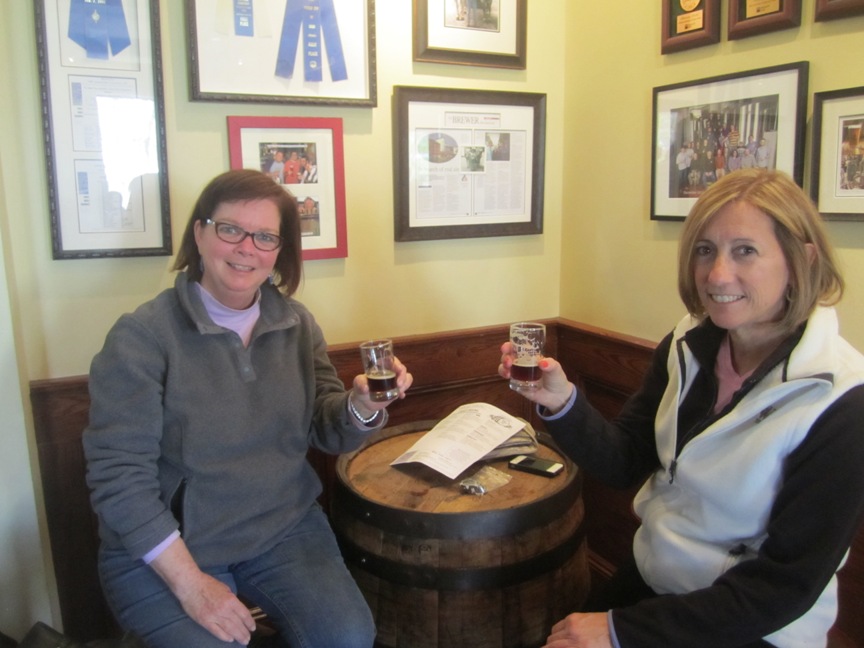 Elsewhere in the tasting room, Kit Mancuso and Dawn Waylonis of Valhalla have made their own beer trail. The women shopped at Sam’s Club on Rte. 9A, then decided to pop into Captain Lawrence for a few sunny Saturday samples. “I dragged her to Sam’s, and she dragged me here…kicking and screaming,” Dawn says with a smile.

They liked the Kolsch and loved the Brown Bird Ale, but found the pilot system brew Angler’s Son, a zesty wheat IPA, a little funky. “We love the smell, but not the taste,” says Kit.

Back on the patio, the bocce balls and cornhole bags are flying; Tom Brady, naturally, is adept at both. He’s not the only fake famous person on site. Rob Walpole of Hawthorne mentions he shares a name, if not a “Sir” honorific, with the first prime minister of Great Britain. Sir Robert may or may not have absconded to Ireland, Rob says, with a helping of Exchequer cash. Still, he’s no Tom Brady. “No one knows who he is,” Hawthorne Rob says with a hint of regret as he sips an IPA. 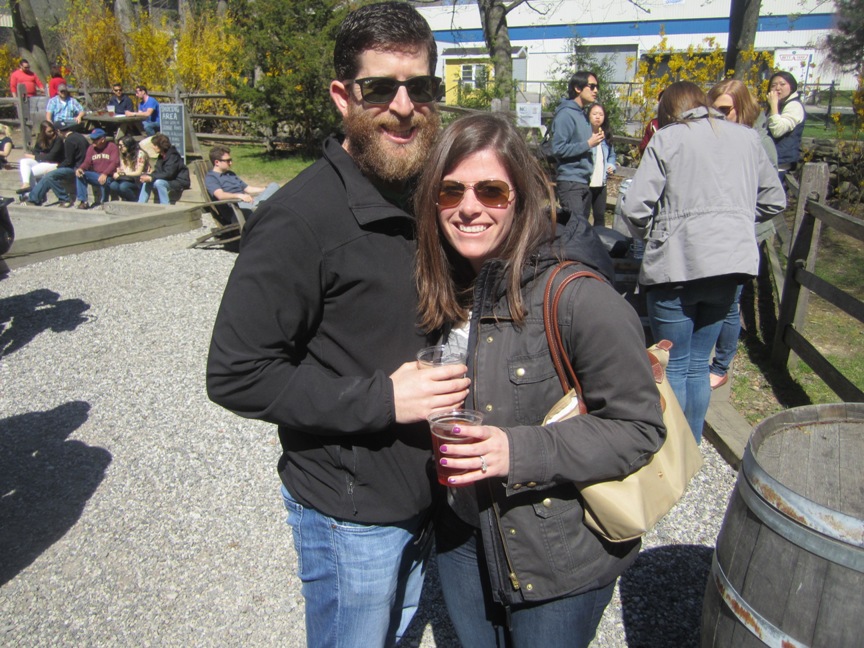 On a nearby barrel, Brian and Carrie Schwartz of Washington Township, New Jersey are sampling a few brews. She’s got the Freshchester—“I’m an IPA girl, but I’m driving,” she says—while Brian has the Seeking Alpha triple IPA. Carrie searched for a nearby brewery on her Untappd app, and found that Captain Lawrence was just across the Hudson—not near the St. Lawrence Seaway up where the U.S. meets Canada, as she had thought. “When I found out,” she says, “I said, we are going—now.”

There may not be a celebrity Carrie Schwartz out there, but Carrie has been told at different times she looks like Jessica Biel, or Elizabeth Shue, or Anne Hathaway. Brian grimaces. “I don’t see any of it,” he says.

For his part, Brian has been told he resembles Jon Stewart before Brian grew a bushy beard. Carrie nods in agreement. “You’re Jewish,” she says. “And you’re funny.”