The Captain’s Log: Dressed to the ‘Nines’, Hanging at the Fermento Funk Factory 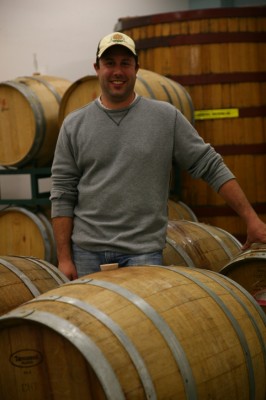 Captain Lawrence throws a little birthday party for itself May 16, when Tap & Pour goes down at the brewery’s Elmsford base. In years past, the brewery would mark its anniversary with a pig roast. This year’s event, Captain Lawrence’s ninth anniversary, will feature smoked pig, which goes great with smoked porter, a hearty IPA, and a sunny day, but the food offerings are all over the map—the Westchester map, that is. There are hot dogs from Walter’s in Mamaroneck, falafel from Taiim Falafel Shack in Hastings, flatbread pizzas from Gleason’s in Peekskill, Italian delicacies from The Cookery in Dobbs Ferry, and so on.

Last year’s pig roast infamously featured lines that snaked halfway to Sportime USA. That will not be the case this year, with a broad array of victuals and a drastically lower headcount. “We learned from our mistakes,” says Scott Vaccaro, Captain Lawrence founder. “There will be many, many, many more food options and not nearly as many tickets sold.”

There are around 800 tickets in circulation for the May 16 event, just over half of the 1,500 sold last year. And for one day at the brewery, the children must remain at home—or perhaps down the road at Sportime USA with your significant other. Captain Lawrence will offer up specialty brews, including some beloved sours, such as the Cuvee de Castleton and the Rosso E Marrone.

“We’re celebrating the Hudson Valley with beers that could not be more local,” says Scott. “Partnering with the farms will be a lot of fun, and will produce some truly special beers.”

Besides opening and christening the Funk Factory, Captain Lawrence has upgraded its regular brewing operation. A new filler and labler started rocking and rolling last week; what used to be four pieces of machinery operated by three people is now two pieces manned by two CL staffers. One part of the operation puts six bottles into the six-pack holder, and the other puts four six-packs into a case. It’s poetry in motion.

“It allows us to get more beer out to thirsty consumers,” says Scott, and also frees up staffers for the keg line, for pilot system brews, and other parts of the operation.

The month of May will feature some funky new brews. The Wild IPA, made with that funky, coveted brettanomyces yeast, is refermenting in the tank. Soon to be available on draft, the brett brew has a “Belgian-esque character,” says Scott. “Fruity, spicy, with a lot of depth to the flavor.”

There’s also a Red IPA in the works—a perennial small-batch beer that comes out a little different each spring. “It’s got a nice, solid malty backbone and a big citrus punch,” says Scott. “It’s not as single-hop dimensional as other IPAs, and a decent chunk of malt adds character to the beer.”

Scott is psyched to tip a few brews with friends old and new May 16. “It’s the highlight of the year for us,” he says. “We’re looking forward to a memorable day.”