Hoppy Birthday to the Captain! 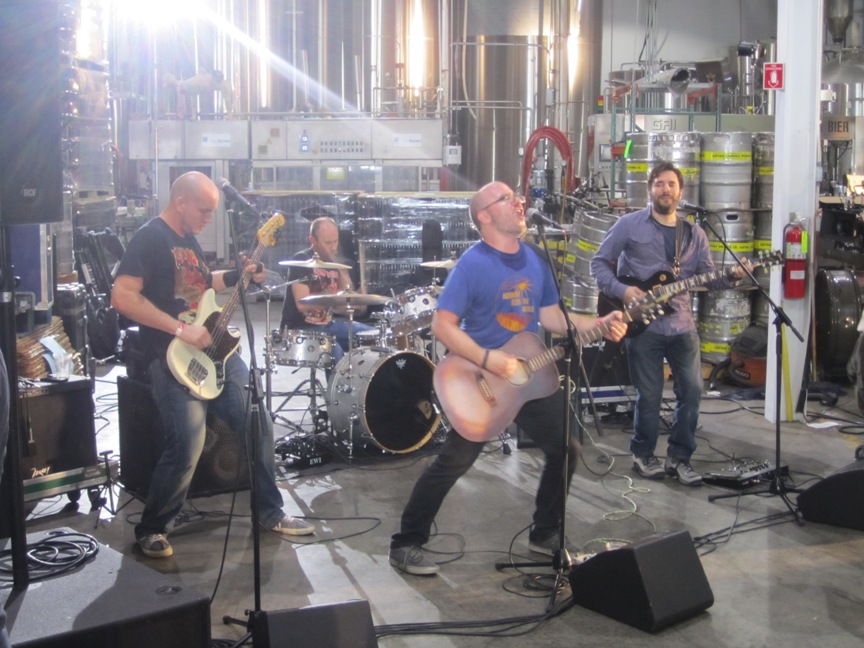 Captain Lawrence marked its ninth birthday in style, with a half dozen bands, as many food vendors and several hundred fans of the brewery coming out to try beers old (Freshchester Pale Ale, Liquid Gold), new (Kirk Lazarus dark witte and Effortless IPA) and rare (Cuvee de Castleton, Rosse e Marrone). The Captain had something to prove after last year’s endless lines at the anniversary pig roast, but this year’s “Tap & Pour” bash had oodles of food–not only pig but pizza from Dough Nation, hot dogs from Walter’s, appetizers from Gleason’s and several other local victual varieties.

Nick Funeral of Monmouth County, New Jersey generally stays away from large crowds, but finds the mix of people at Tap & Pour just about right. After all, Captain Lawrence cut the ticket total almost in half from last year to keep it relatively intimate. “It’s spaced out enough, and there’s no line for beer,” he says. 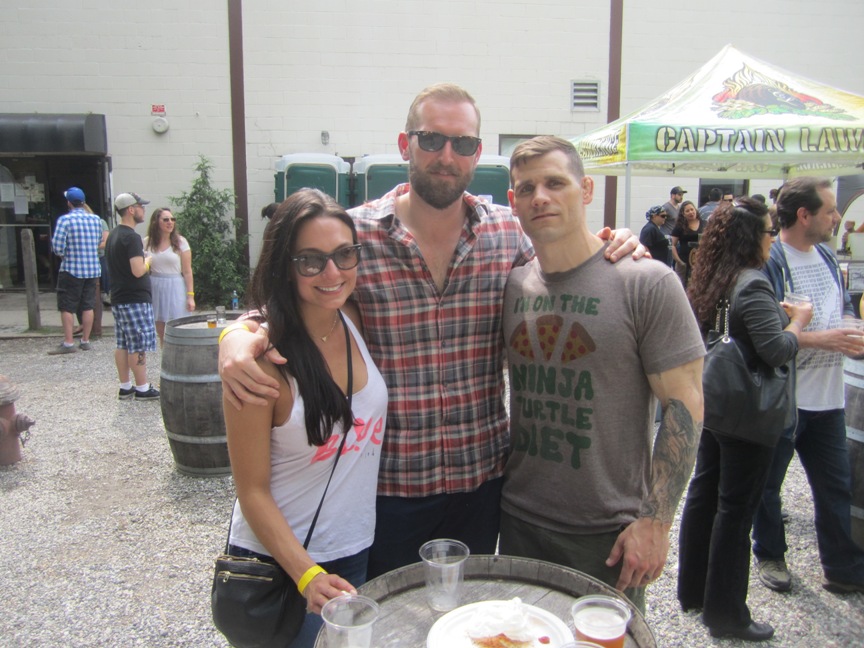 Nick sips some pale ales with pals Tom Schultzel and Megan Jones of Elmsford. There is some debate as to whose idea it was to come to Tap & Pour. “Mine,” says Tom. “I’m pretty sure it was mine,” counters Nick.

Nick works out a compromise. “It’s half his and half mine,” he says. “And a quarter Megan’s.”

It wasn’t the schools or the parks that drew Tom and Megan to Westchester—it was the brewery. Tom was looking to move from Jersey for work, so he and Megan poked around White Plains a bit. “Hated it,” says Megan, as Nick refers to her as a “Piney”, and insists I include that.

But Megan and Tom ducked into Ron Black’s, had the Captain Lawrence Pumpkin Ale, and blissfully sat back as a humdrum afternoon melded into a memorable evening. When she learned that the brewery was just up the road, well, Megan was sold. “Captain Lawrence is basically why we moved here,” she says. 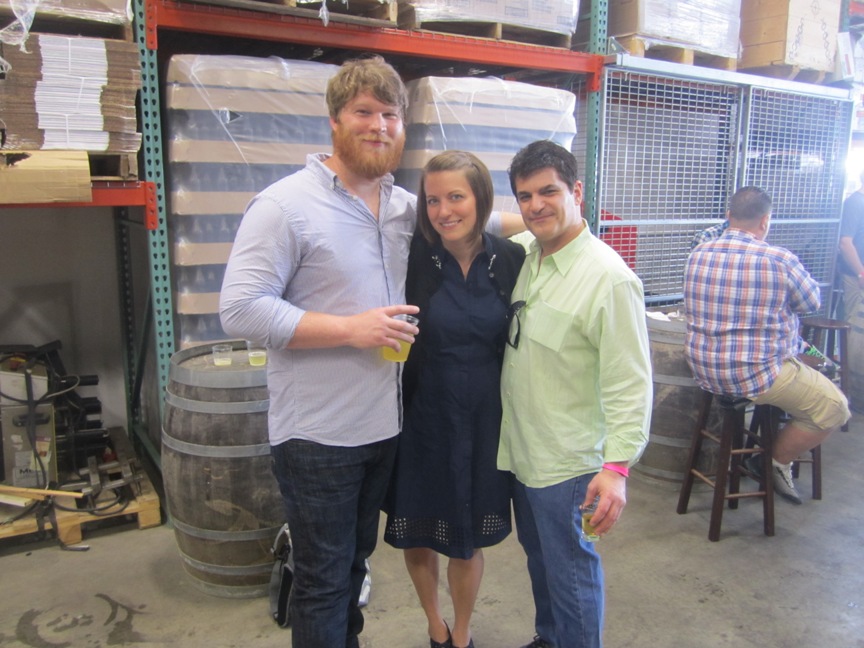 Evan Watson’s VIP set in the Fermento Funk Factory, as the Captain’s new sour ale aging facility is called, winds down. Phineas and the Lonely Leaves set up shop inside the brewery. A film crew representing Jameson’s Whiskey is on hand, filming something documentary-esque related to some Captain Lawrence sours aging in Jameson’s barrels. It’s undeniably festive.

Beertender Rob Catalano was pouring at the first pig roast nine years ago, and he’s dishing out the rare brews today. “I never thought it would come to this,” he says. “It feels pretty damn good. It’s definitely crazy to see how far we’ve come.” 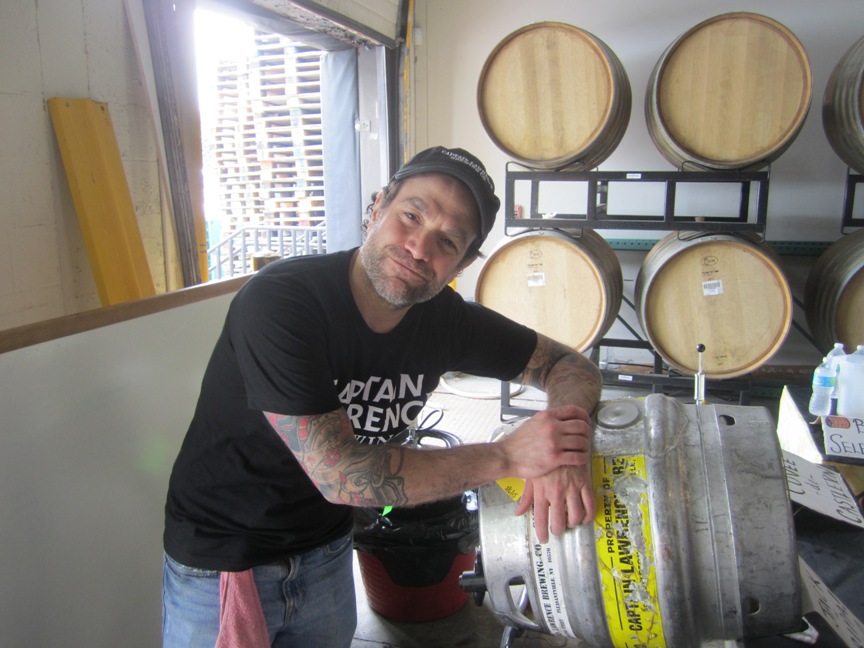 But the Fermento Funk Factory (patent pending, or at least it should be) is really about the sours, and Patrick Densmore, cousin of CL staffer John Hanrahan, tried them for the first time, and it’s love at first sip. “I see this as my future,” he says, though John notes that it could be an expensive lifestyle choice.

Patrick and brother Cory are up for the weekend from Philly, because that’s what you do when your cousin works in a brewery, and it’s the brewery’s birthday. Speaking of birthdays, Cory just turned 21 a few weeks before, and finds the Liquid Gold preferable to anything else a 21 year old might be drinking. 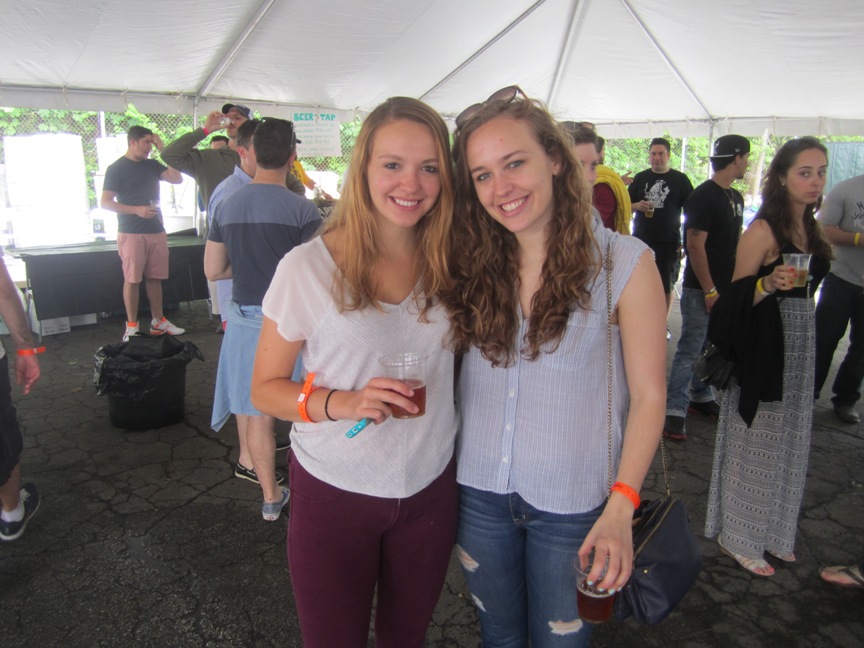 After a rainy morning, the sun is shining. While it’s a day for funky, special occasion beers, back outside, sisters Cara and Jenny Rothenberg of Tenafly, New Jersey are sipping the beer that started it all—the flagship Freshchester Pale Ale that was poured when Captain Lawrence first put flame to pig back in 2006. “I like the lighter beers,” says Cara. “I don’t go for the hoppy stuff.”

The sisters are eyeing the many food selections, but one thing has their attention: deep fried bacon—not to be confused with the band Space Bacon that’s currently got the crowd moving. “Salivating,” says Cara. “There are a lot more food options than last year.”

Nearby, a half dozen women schmooze in the sun. While most everyone’s here to sample the beer, they’ve actually agreed to drive their boyfriends to and from, their hands sporting the X of a selfless designated drive. Except Gina Palumbo of White Plains, that is. She’s quaffing the Liquid Gold, and scoping out some of the guys in attendance. Her type? “Tall, skinny, beards are OK,” she says. “Tattoos are OK too, but no Chinese characters.” 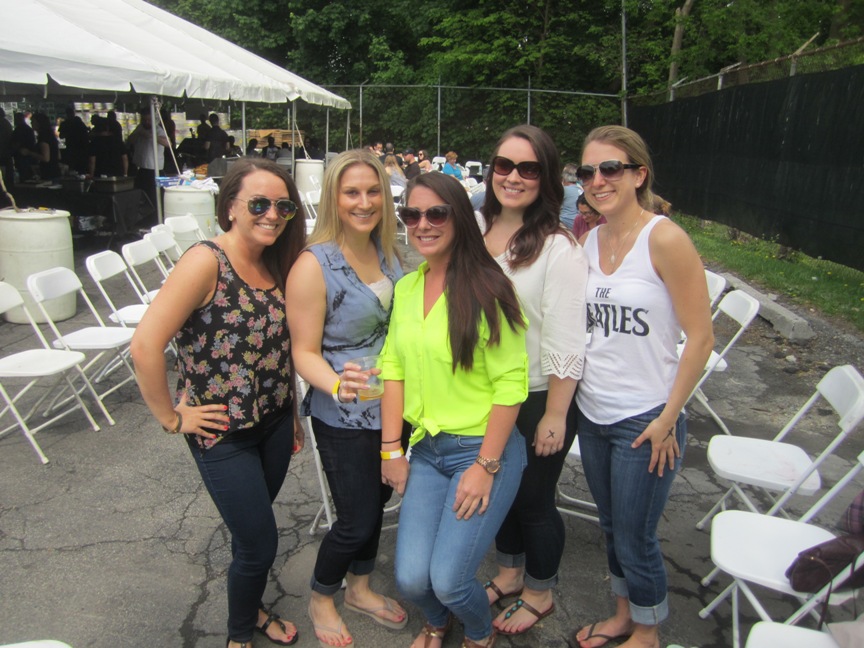 The Mark Sinnis Band takes the stage for its unique brand of “cemetery & western”. Captain Lawrence founder Scott Vaccaro takes it in with a smile as he sips a rice imperial IPA brewed specially for the day. He recalls that first pig roast in 2006, when he cooked the pig, served the pork and poured the beer. The Captain’s come a long way, to say the least.

“The sun is out and the beer is flowing,” Scott says. “We’ve got nine years on the books and we’re just getting started.”