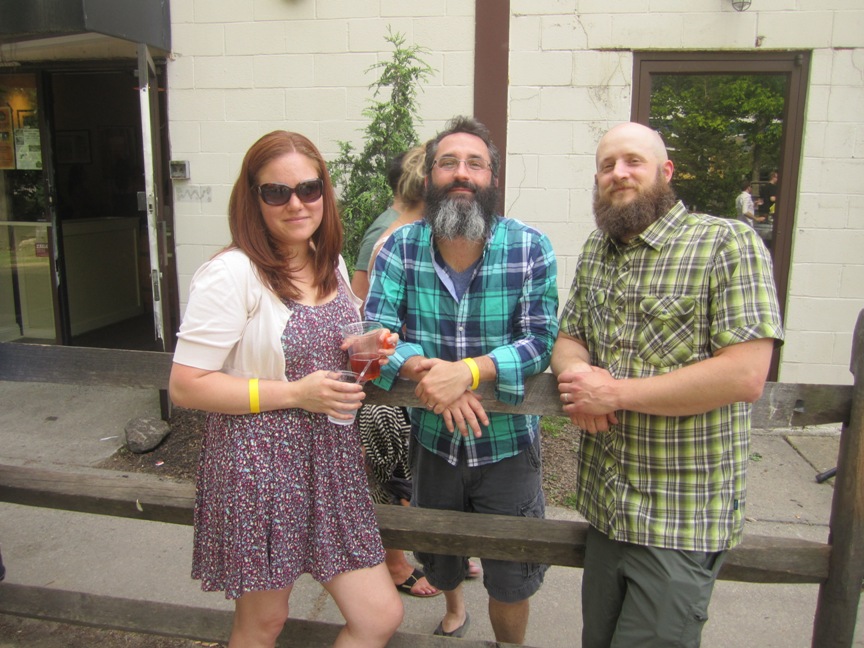 For most of us, Memorial Day Weekend is about getting as far away from work, both psychologically and perhaps geographically, as possible. Yet for Ryan Kipp, brewer at Captain Lawrence, the workplace was where he chose to mark a special occasion: his son’s first birthday.

Ryan and his wife Jamie had a healthy crowd out on the patio, family and friends trekking in from all over—Justin’s brother schlepped down from Boston–to celebrate young Emerson’s birthday with cupcakes. Ryan being a brewer and all, of course there was a special birthday beer—an Irish stout infused with oak spirals and Early Times whiskey.

We should all look as favorably on our workplace as Ryan does. “It’s great to have family around,” he says. “Plus, Emerson is entertained.”

Those who did not brave the traffic to get far out of town were making the most of the near-perfect weather, and doing all the fun things close to home they’ve been planning to do for months. “We’re doing the staycation-type thing,” says Arthur Bentley of Pleasantville. He and wife Susan made the most of Fleet Week in Manhattan, touring the Intrepid and the USS San Antonio. “I got to pick up weapons you’re not normally allowed to pick up in New York,” he says. They brought their children to see “Jersey Boys” too, which even got thumbs-ups from the kids. 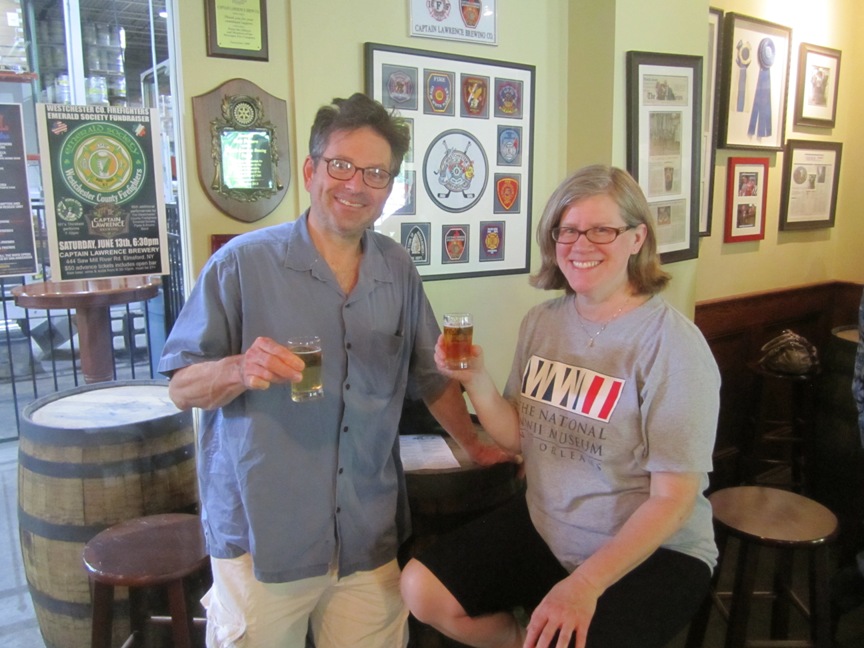 Then on Sunday, it was a walk in the Rockefeller Preserve, and a few beers inside the Captain Lawrence tasting room. “She decided we needed a cold one,” says Arthur, nodding gratefully to his wife.

He’s got the yeasty pilsner Point Proven (“I had to look up ‘Zwicklebier,’” he says), while Susan enjoys the back-by-popular demand Frozen Flowers, a Belgian-style ale. “A little bitter aftertaste, a hint of sweetness, very crisp,” is Susan’s assessment.

The two have been sampling craft beer before there was even a craft beer movement, and speak fondly of the Captain’s early days in Pleasantville. “He was drinking Boston Beer Company in the late ‘80s!” Susan says. 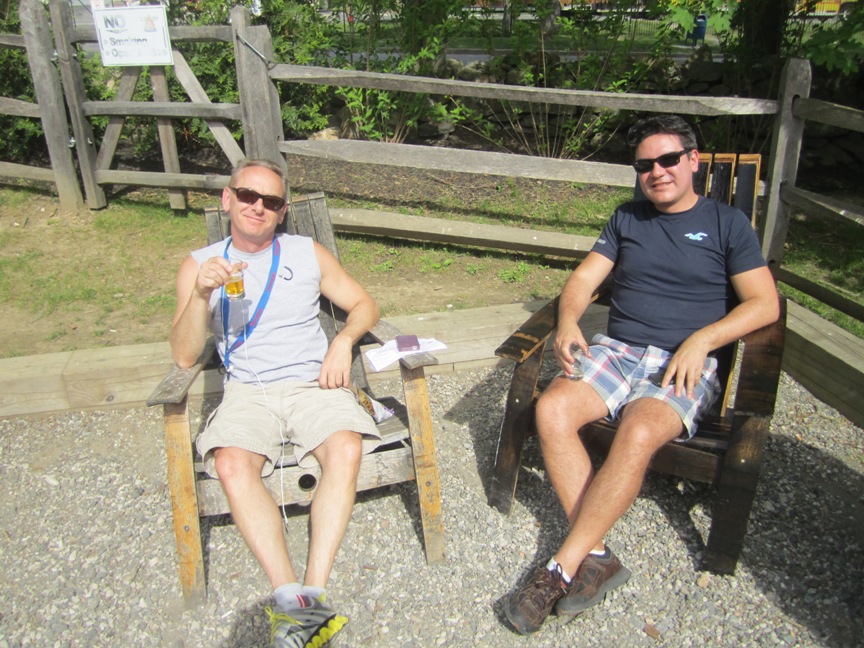 Mark Kersh of Yonkers and Carlos Carrea of Hackensack also opted to rehydrate at Captain Lawrence after some exercise, taking their bikes out for a spin. “The weather is good,” says Mark as he sips the R.I.P.A., a rye-based ale dry hopped with simcoe, Chinook and Columbus hops. “This is my reward.”

Mark used his days off to check out the various nanobreweries down in Queens, including Big Alice and Transmitter Brewing, both in Long Island City, raving about the latter’s “farmhouse ales” served in wine bottles. And then it was on to Elmsford on Sunday. 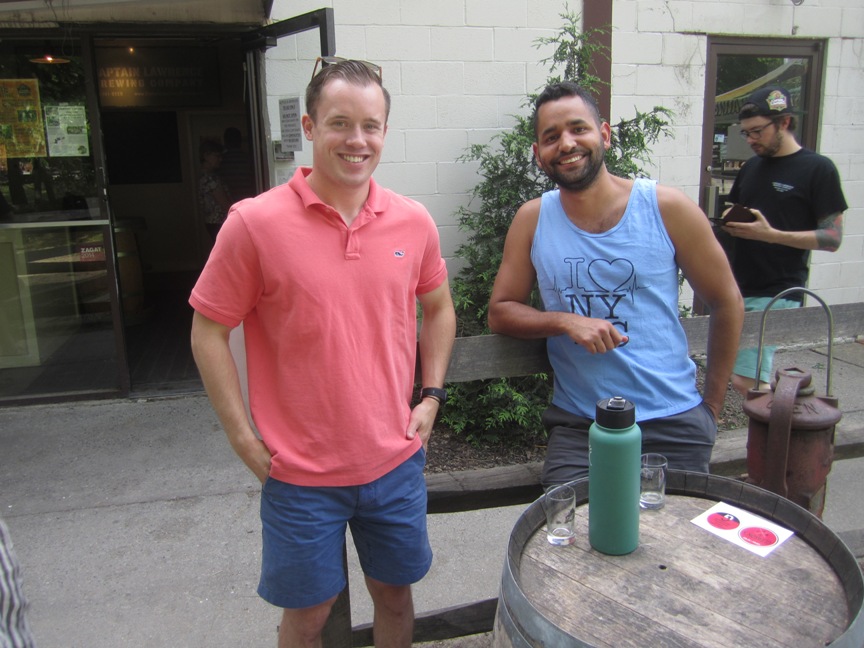 The sun is shining and the band Gridline is playing a heady mix of funk, jazz and blues. Others may arrive at work on Tuesday raving about beaches and barbecues and other Memorial Day staples, but the crew at Captain Lawrence seems perfectly content to sip beer, indulge in some pizzas from the Gleason’s guys (and, in Emerson Kipp’s case, munch cupcakes), and take in the tunes. Spending the day at Captain Lawrence was a “mutual decision” for Tim Morel of Elmsford and Mario Corro of Valhalla, says Tim. Mario had to jump back into his med school studies the following day, and is pleased to spend Sunday sampling the small batch R.I.P.A. in the sun. “The music is relaxing,” he says.

Tim, meanwhile, digs his frosty cup of Frozen Flowers, a small-batch beer that gets its name from the elderflowers in the mix. Asked for his Memorial Day Weekend 2015 highlight, he looks around the patio, smiles and says, “This is it for me.”