People are reading
You are at:Home»Columns»Seasonal Chef»Making a Crunchy Summer Slaw with your Farmers Market Ingredients: Seasonal Chef

This week my CSA was gigantic. It’s summer and the fields are hitting their stride. Some first things popping up on the farms now are cabbages and onions. Looking at it all I was thinking: could I create a great slaw recipe? Truth be told, I’m not a huge fan of slaws. They end up being soupy, globby, and generally unappealing to me. It’s like salad with way too much dressing. I won’t eat it. I prefer to have a crunchy salad almost all of the time. Faced with cabbage and kale this week, what’s a girl to do? It was too hot this past weekend to even think about sautéing them. So attempt a crunchy summer slaw, is what I did, and I’m happy to report, it worked! 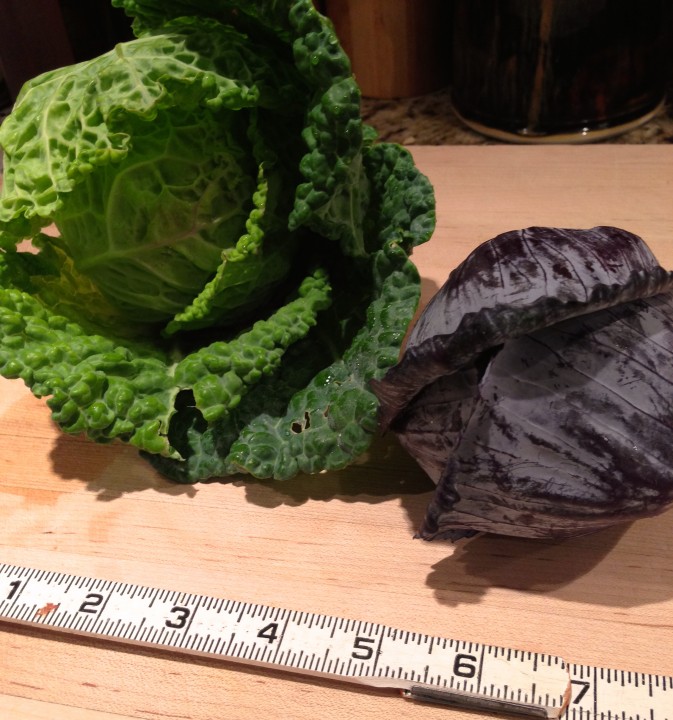 Let me first start by saying you can mix and match your greens. Any combination of cabbage and kale will work with this slaw. I had the cutest cabbages from Hilltop Hanover Farm. Each gave me about 6 loose cups after slicing. 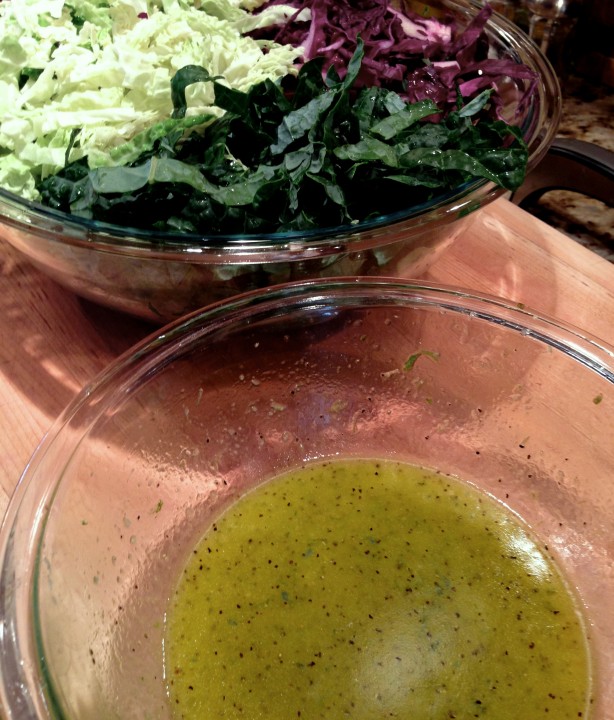 To that I added a bunch of kale, which yielded another 6 loose cups. Just about the time I was slicing and dicing my husband appeared in the kitchen. This slaw was slated for a BBQ later that day, so I enlisted him in the dressing creation. Pulling a bunch of ingredients out I let him have at it. The result was quite tasty. 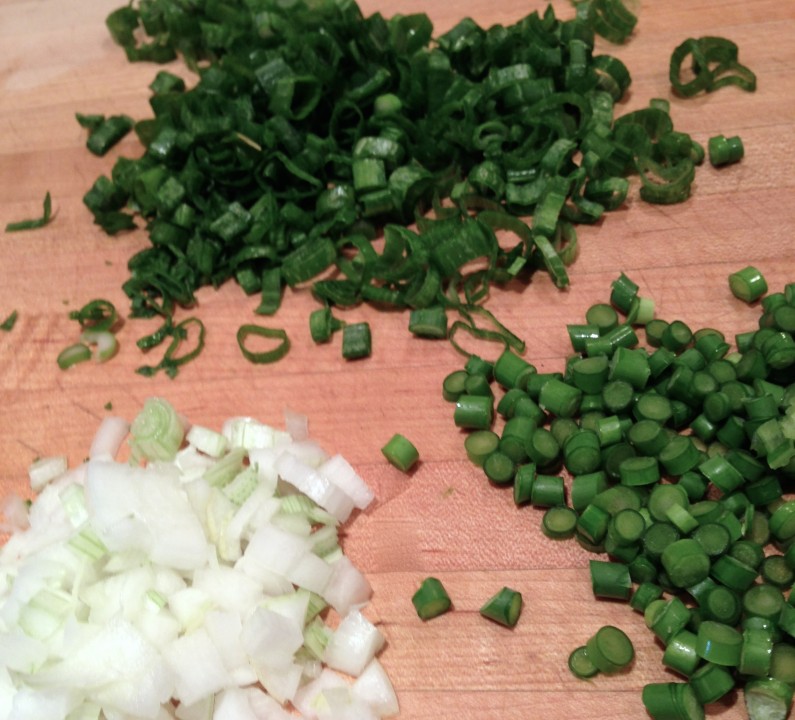 In the share I also had spring onions and garlic scapes. Those got chopped and added too, 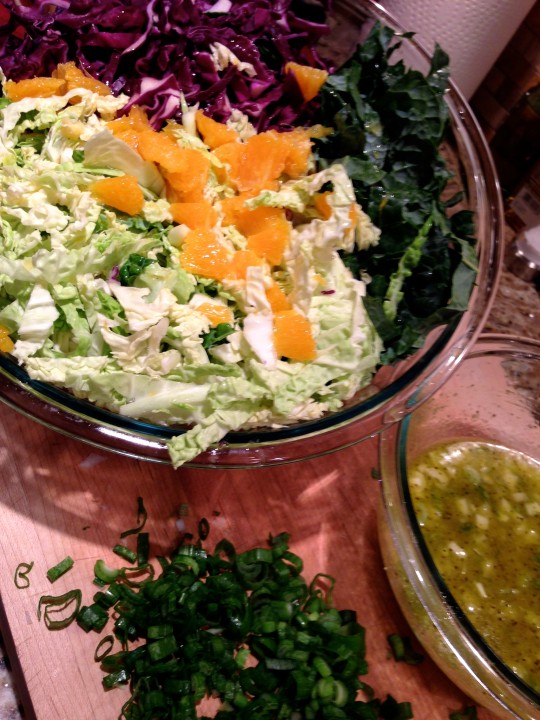 including a lone orange in the kitchen fruit basket. (I hate for anything to go to waste!)

Last, but not least, I had a couple of cucumbers in the share. A special note on the cukes: I was surprised at their sweet crunch. Nothing like what you find at the supermarket. Just picked cucumbers are a revelation. Even the seeds are sweet. If you are on the fence about them, try one from the farmers market. I promise you will be swayed. 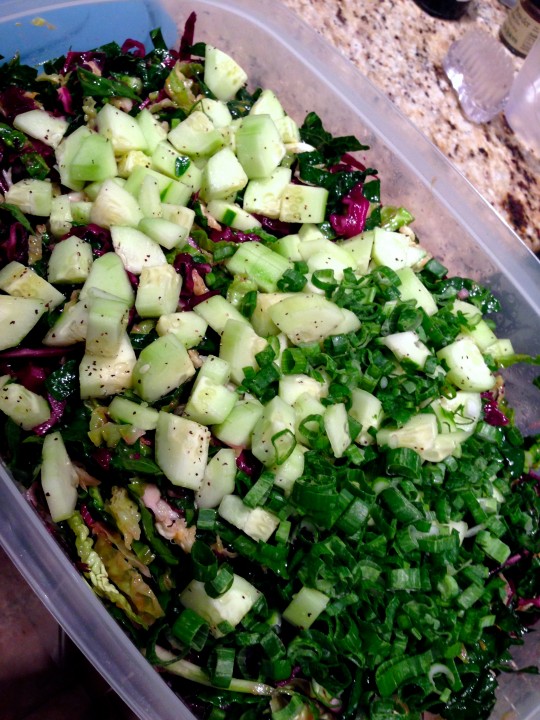 I decided to save them, and the green onion tops for last, mixing right before we left the house. I wanted the cucumbers to remain as crisp as possible. 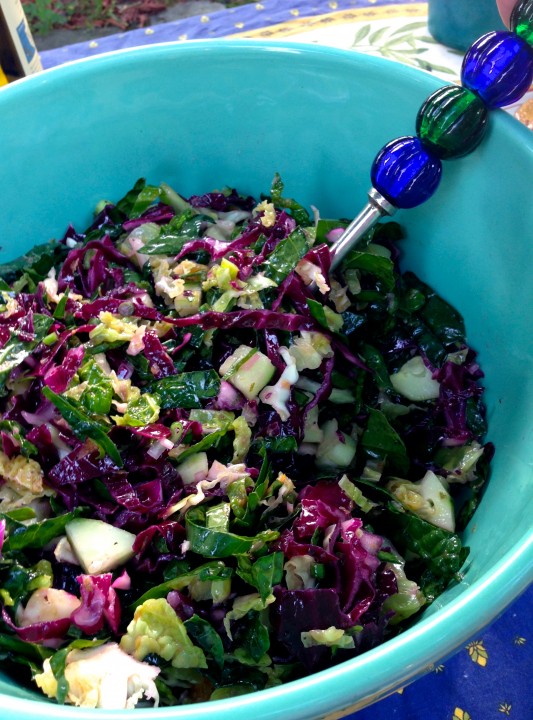 My “cooking” time on this was only about 30 minutes in the fridge. You need some marinating time to let the cabbages break down a little. However, I highly recommend that if you like the crunch, like me, limit the time. If you like your slaws on the softer side let it rest over night. We tested a little after the BBQ and the next day it was still very tasty, but very soft. Your choice. Click this link to see the recipe for: Seasonal Chef’s Summer Slaw.

Mark your calendar for my next Farm Stand Cooking Class at Hilltop Hanover, on Friday July 24, from 4:00-6:00 pm. They are loads of fun and only $25 for non-members and $20 for members. It’s a great way to get some quick and easy ideas for your just-picked farm ingredients.

One year ago: Okra and Eggplant
Two years ago: Golden Beets
Three years ago: Purslane