August Upon Us, Glass is Half Full 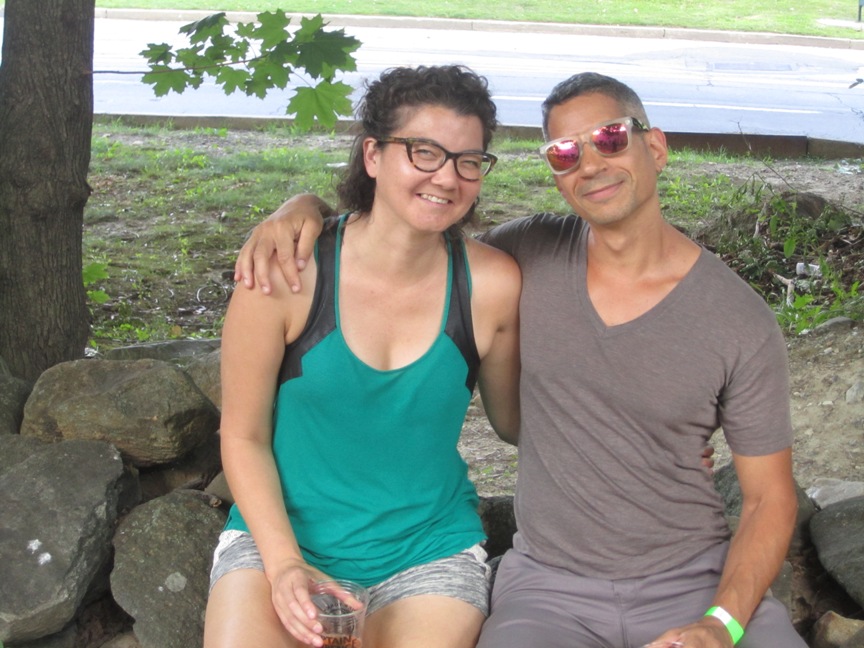 It is officially August, which means the summer has unofficially crossed its midway line. With fall not that far off on the horizon, perhaps it’s fitting that the Pumpkin Ale has popped up on the Captain Lawrence tap system. Jesus Lorente of North Bergen, New Jersey is something of a pumpkin ale aficionado; sampling with his pals, he gives the Captain Lawrence amber ale a thumbs up. “I try a lot of them,” he says. “This one is good, not too sweet.”

The beer, full of autumnal spices, serves another purpose. “It makes him think of football,” says Lenny Enriquez of Dumont, NJ, of Jesus, a Giants fan. 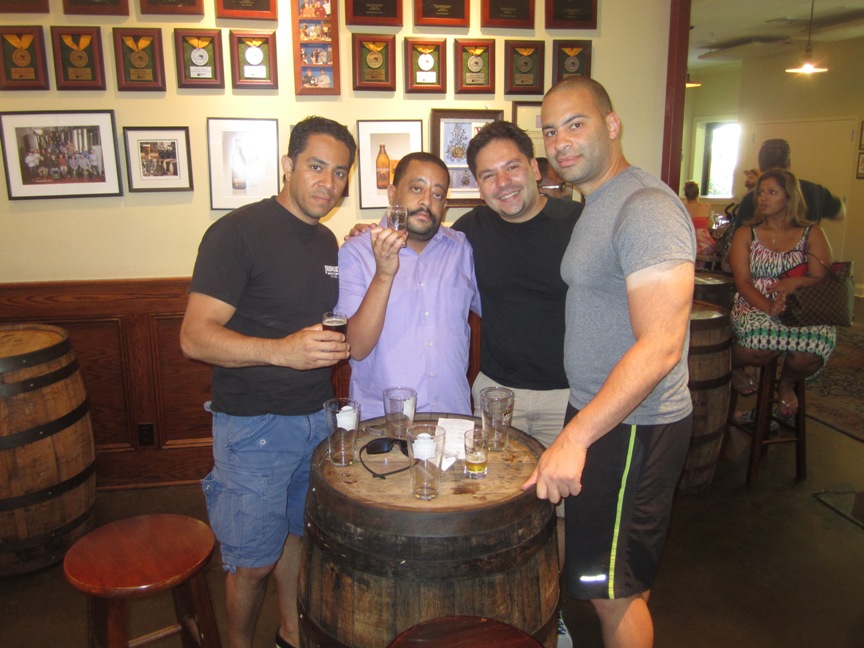 Friend Manny Guzman sips the Effortless IPA, which he says is perfect for a blue-sky summer day such as this. “It’s something for chilling outside in the summer,” says Manny, who credits Lenny for turning him on to good beer. “It helps you cool down.”

There’s another month until Labor Day, and the guys are making the most of it, with a friend’s wedding in Las Vegas coming up in August. Jesus, however, is on the fence for the road trip, citing work and girlfriend concerns. “Maybe,” he allows. 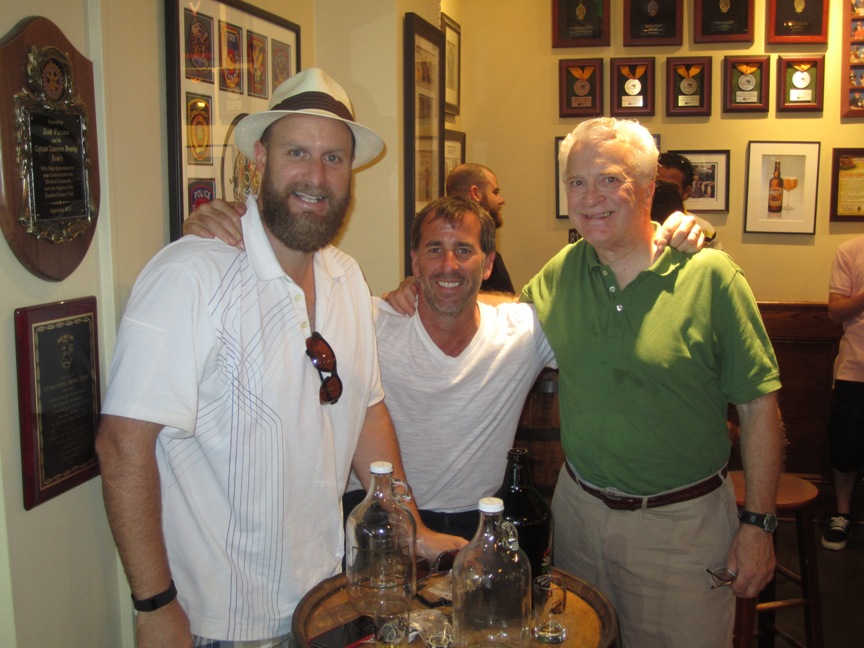 Elsewhere in the tasting room, Eric Wheeler (“as in 18-wheeler,” he says) of Millwood enjoys a few samples of Freshchester Pale Ale with his friend Paul Keyes of Millwood and father in law Sam Brady of Ann Arbor, Michigan. Eric insists he’s “at Home Depot right now,” in case anyone at home asks, and who are we to blow his cover? He explains that he will likely hit the Home Depot on the way home. “You can easily lose an hour there,” he explains.

While Eric is Hamptons-bound later this month, his table-mates don’t have much going on for the rest of the summer. “We live pretty boring lives,” says Paul as he sips his “standby”, Hop Commander IPA.

Things are picking up out on the patio. There’s a work trip for a group of restaurant staffers from the Breslin in New York, who are engaged in a heated couple games of cornhole as friends Nathan Abbott and Michelle Cox, both of Brooklyn, watch from atop the rock wall in the shade. He sips the Liquid Gold–“I’m more a lager guy,” says Nathan–while Michelle has the Effortless IPA. 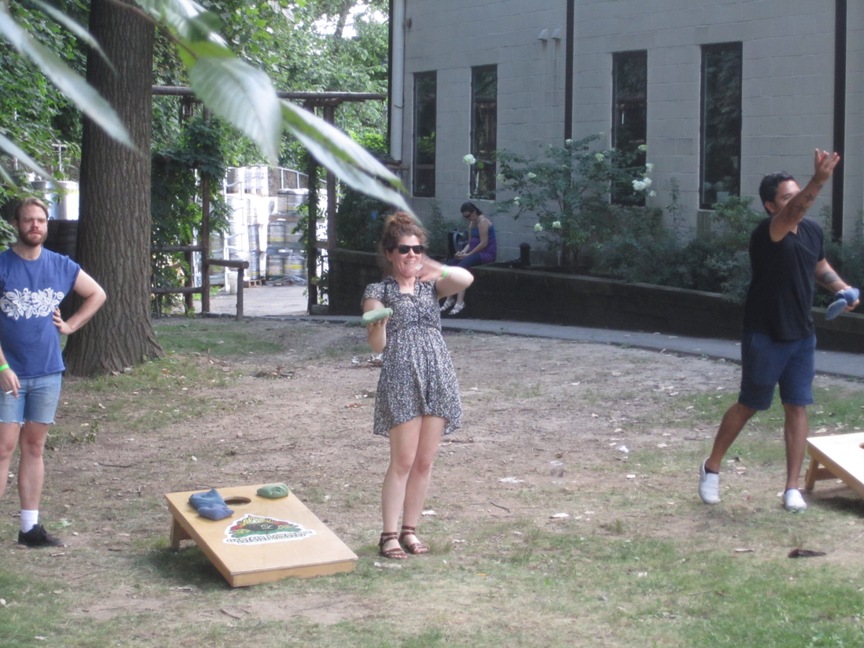 A cornhole game ends, and the two, rested and ready, rise to play.

The Gleason’s guys sell a steady stream of pizzas and Jack and the beertender boys serve up the samples. Kevin Brant is making the long trip from Philadelphia, where he saw the bands Faith No More and Refused, back to New Hampshire. He entered “Captain Lawrence” as a stopover in his GPS, and unwinds with a Freshchester. “Nice malts,” he says. “I like it better than the IPA.” 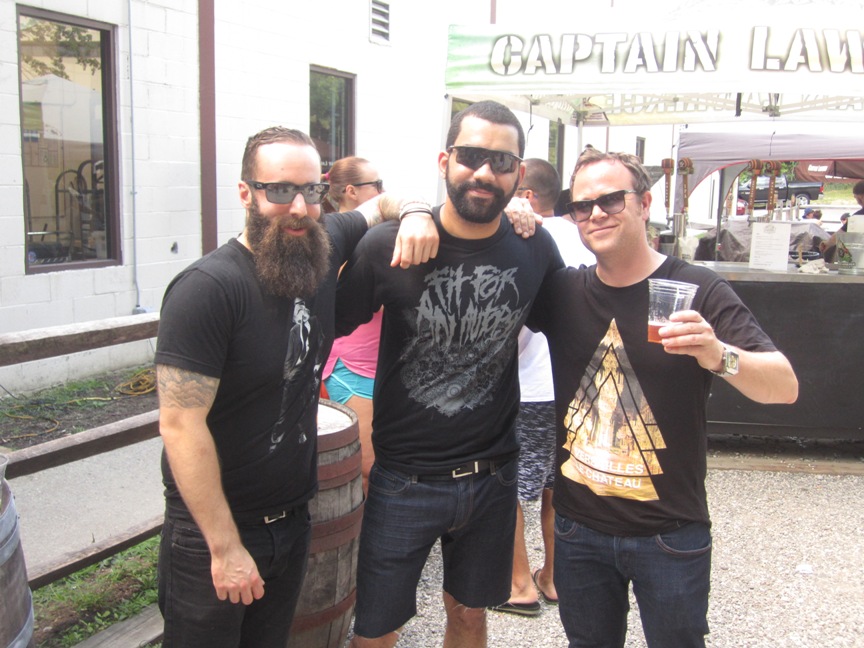 Kevin is chatting with Marc Sergenian of Bedford Hills and Steve Pinn of West Harrison. All three are dressed in black; Kevin had them pegged as fellow metalheads, and struck up a conversation. His assessment was correct. “We can smell our own,” he explains.

Marc used to be a regular at Captain Lawrence’s old Pleasantville digs, queuing up for special releases such as the Cuvee de Castleton. He’s digging the Grass Roots IPA, a summery brew with a touch of lemongrass. “It’s a great session beer, just hoppy enough,” he says. “We’re taking it easy today.”

Steve, for his part, is enjoying his 29th birthday. The celebratory toasts are made, but he’s taking the milestone in stride on this sultry summer Sunday. “A barbecue later, nothing too crazy,” says the birthday boy. “We’ll see where the day takes us.”