People are reading
You are at:Home»Recipes»Main Courses»Beef»Seasonal Chef: Making a Quick and Easy Dinner

Whether I am speaking to people in a cooking class, demo at a farmers market, or just in conversation at home, I am invariably asked what I make for a regular dinner. In a typical seven-day week I am cooking at least five, maybe six days. That could be anything from my personal chef work, a cooking class or recipe testing. When the evening rolls around for us I am looking for a quick and easy dinner. Sometimes not having a plan can yield a very tasty  meal. Sunday night always seems to be that opportunity for me. This past weekend I did the challenge I give to participants in my cooking classes: Put down the cookbook, open the ‘fridge and pull out what you have to make a meal. You just need to trust yourself and throw a little caution to the wind to make a quick and easy dinner. 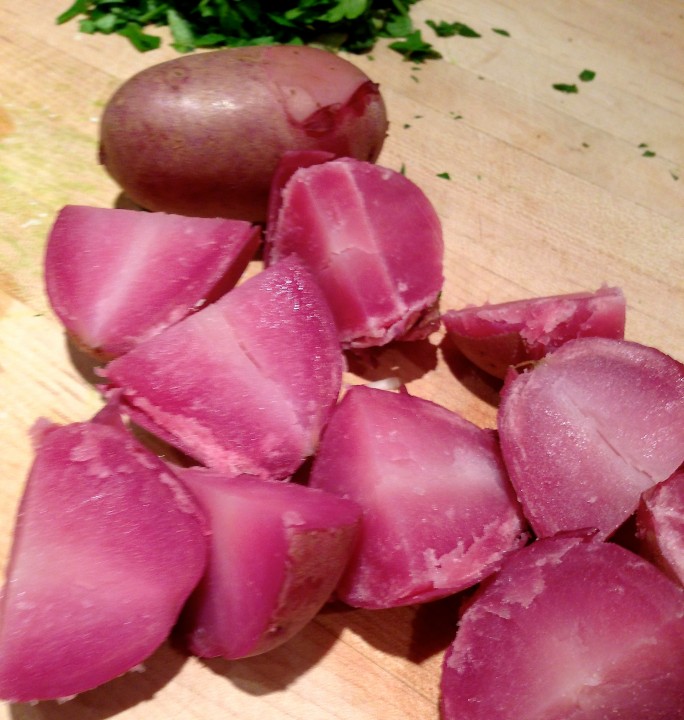 My goal was do make this dinner in less than an hour and in no more than two cooking vessels. I was successful on both counts. I don’t have a recipe per se for this experiment, only a few notes I quickly jotted down while cooking. My start time, when I took the picture at the top of this post, was 7:20 pm. The first thing was to get the potatoes started. I had about 1 1/2 lbs of small Adirondeck Red from MX Morningstar Farm. In a heavy bottom pot I added the whole potatoes to 6 cups of cold water and 1/2 cup of kosher salt. It sounds like a lot of salt, and I generally don’t use that much, but I was experimenting. The potatoes turned out to be really delicious. In addition to the the great flavor, the color was amazing. 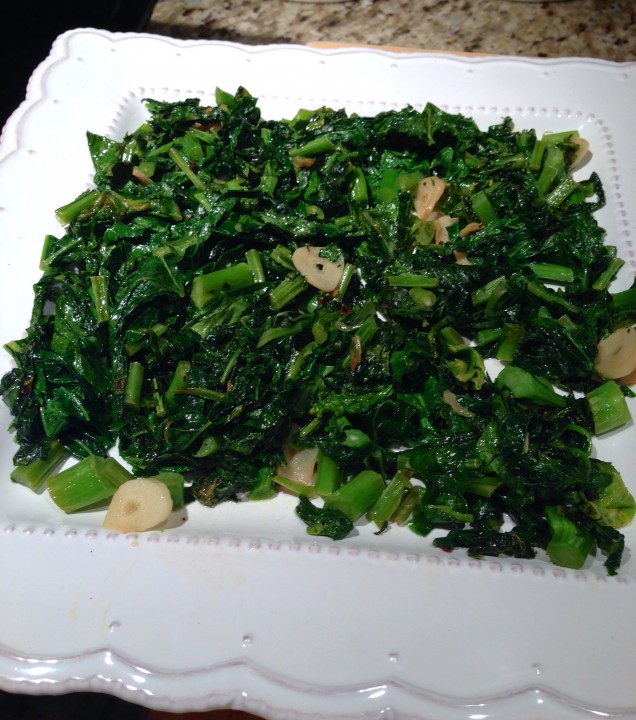 While the potatoes were coming up to a boil, then simmering, I started the sauté. First In the pan was a bunch of spring raab from Gaia’s Breath Farm. I used a non-stick pan, which ended up being pretty smart in the end. I sautéed the raab in olive oil with two sliced garlic cloves and an pinch of salt and red chili flakes. After sautéing for about 3-5 minutes I added a 1/4 cup of water and let it steam for another 3-5 minutes. Then removed to a platter. 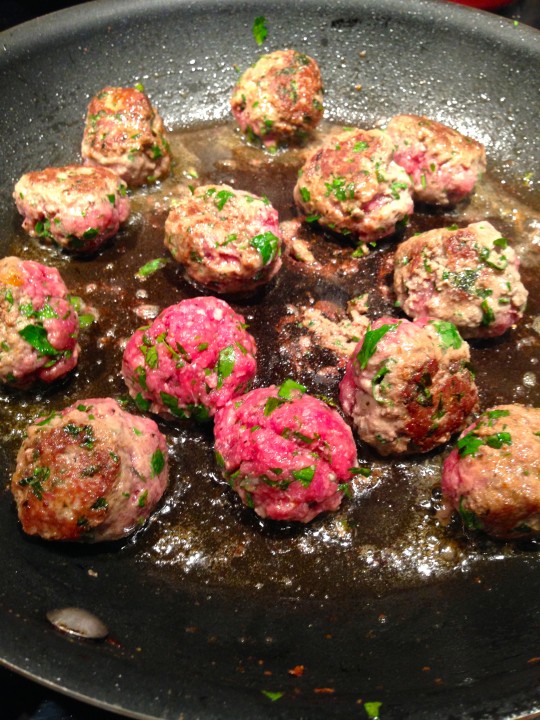 While the raab cooked I made the meatballs. I had 3/4 pound ground beef from the vendor Farm Eats. After my demo on Sunday at the the Irvington Farmers Market, I got to talking with him and decided to give his ground meat a try. I was pleasantly surprised, the meatballs were phenomenal.

To the meat I added 1 beaten egg, 1/4 cup grated parmigianno reggiano, 1/4 cup chopped parsley and a teaspoon each of kosher salt and ground black pepper. Adding a little more oil to the pan I cooked the meatballs for about 5 minutes, shaking occasionally to brown them on all sides. 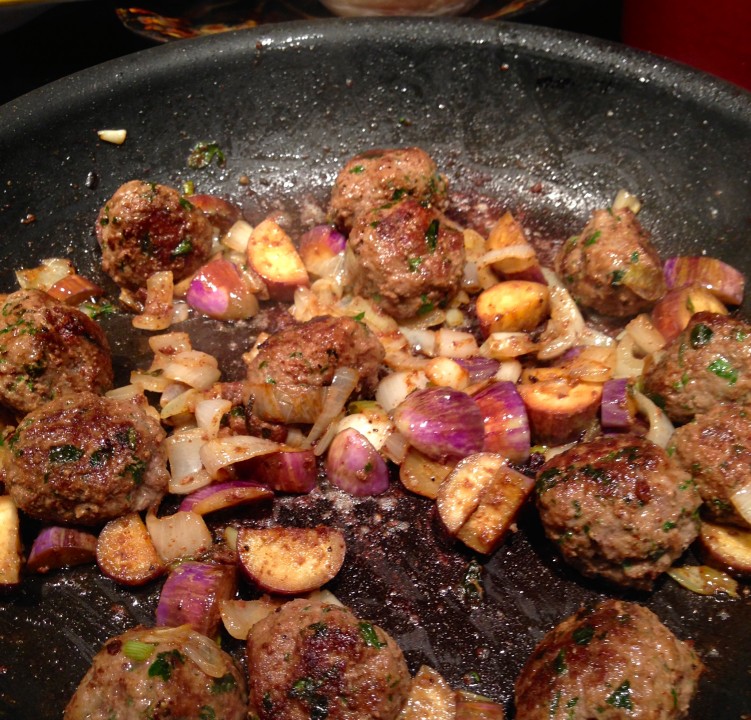 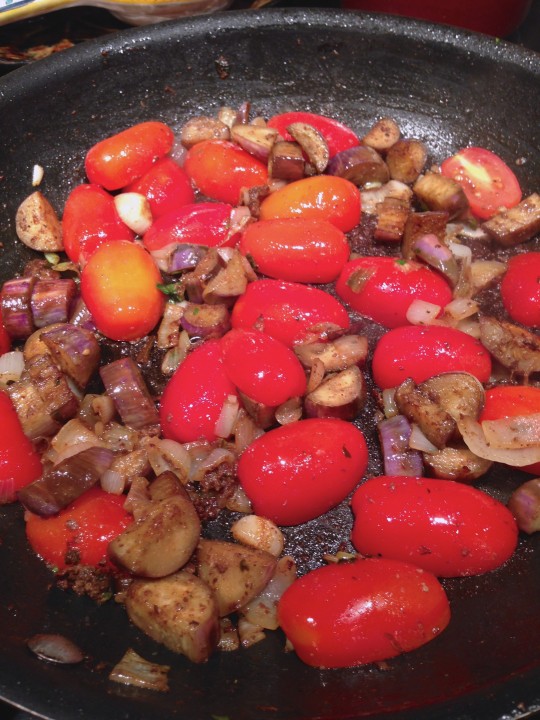 While that was going on I sliced 1 pint of Juliet tomatoes, also from MX Morningstar. I didn’t want to to overcook the meatballs, so they were removed and temporarily set on the raab platter. I really wanted to keep the integrity of the tomatoes and only cooked then for about 5 minutes, cut side down. The pan was a little sticky and dry, so I added 1/2 cup of hot water to deglaze it. That worked like a dream, and thickened everything up.  I added the meatballs back to the pan, tossed them with my “sauce” and turned off the heat.

At some point during the middle of all that sautéing the potatoes finished cooking. Being small the cook time was fast, maybe 10-15 minutes after the initial boil. I drained and set them aside. I was just about ready to start plating all this fabulousness, and decided to just clean up my counter top and cutting board. The pan was still warm and so were the potatoes, giving me a few minutes to spare. 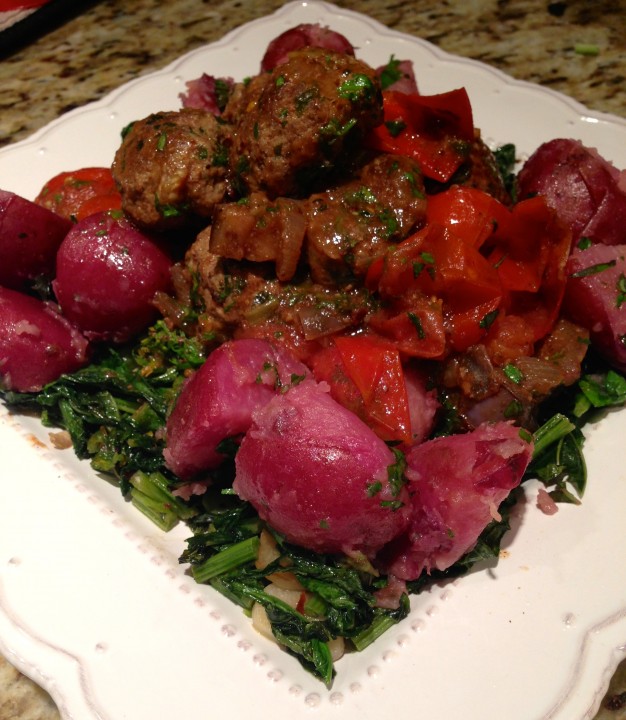 Just as I finished quartering the potatoes, ready to load up the platter, I glanced at my stove clock. Amazingly it registered 8:10 pm. Frankly I was a little surprised myself! A forty minute dinner, with a little cleanup in between? 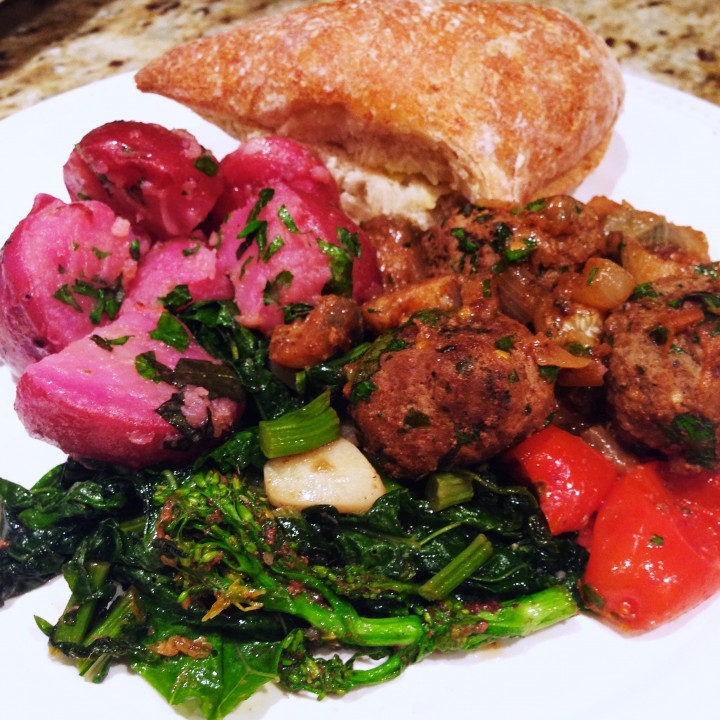 By 8:20 we were sitting down at the table. While this might not be the most glamorous picture I’ve ever done, the flavors were all there and made for a perfect end to the weekend. Every single ingredient, even the bread on the plate from Wave Hill Breads, came from the farmers market. The end result was four portions, or two dinners for me and my husband, under $30 and under an hour to prepare.

You can catch me twice this week, on the road. On Friday, August 7 I have a new Farm Stand Cooking Class from 1:00-3:00 at Hilltop Hanover Farm. Then on Saturday morning I will be demoing at the Chappaqua Farmers Market. Hope to see you!

One year ago: Peppers and Eggs in College
Two years ago: Sweet Frying Peppers
Three years ago: Winning a Throwdown Competition with my Black Bean Burger!