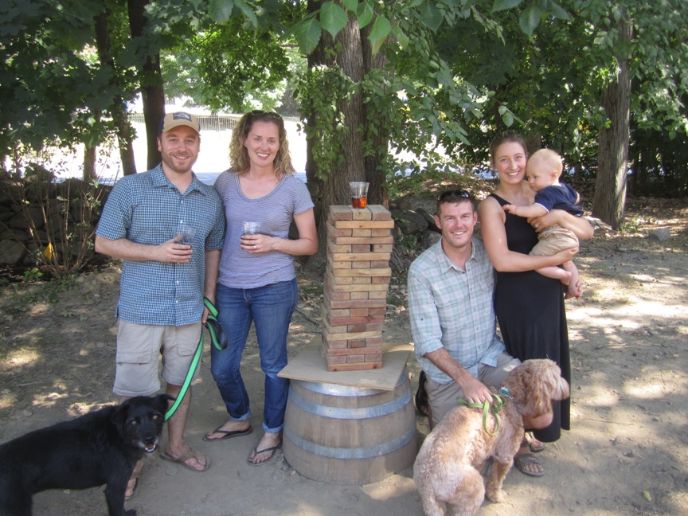 It’s 1 o’clock on a Sunday; in a week’s time, the Jets and Giants and most of the other bands of marauders that make up the NFL will be awaiting the opening whistle. So football is kind of, sort of on the brain at Captain Lawrence. Louis Torres of Yonkers and Mark Morales and Kristin Sury of Port Chester are enjoying cold samples on the hot patio; Louis and Kristin the Liquid Gold, and Mark the small-batch brew Citrus Queen, a heady mix of session IPA and grapefruit. Mark and Kristin had discussed visiting either Half Full Brewery in Stamford, or Captain Lawrence. The Captain won out.

“He likes more of the beers here,” says Kristin.

The trio will likely be taking in some football at this time next week. Kristin’s father has Giants season tickets. “The Jets and Giants are both from my heart,” says Louis of his dual rooting interests. “But I like Eli more.” 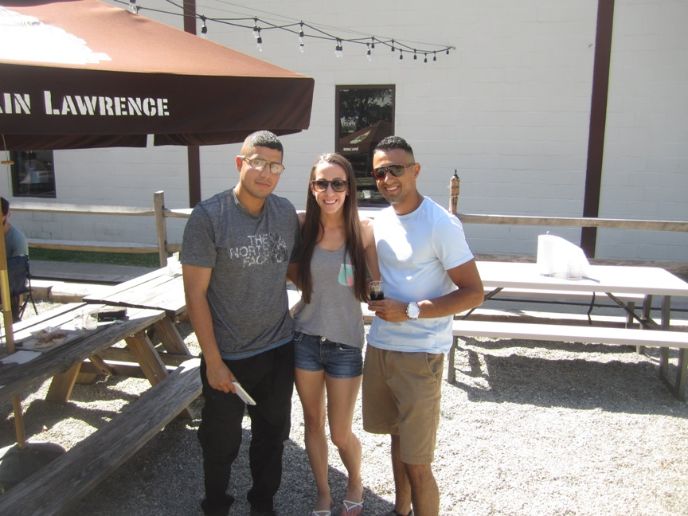 The Liquid Gold, he believes, is an ideal football-watching beer. Mark says it’s the Citrus Queen. “I may have to get a growler,” he says of his final pre-season preparations.

Also keen on filling up the growler are Sue and Scott Waterhouse of Scarsdale as they sit in the brewery and sip the Hop Commander IPA. They are headed to a Labor Day barbecue; the host owns a wine shop, so bringing wine is out of the question. “We figured, it’s a beautiful day—we’d come here,” says Sue.

The growler fill choice remains to be determined. “Something hoppy,” is all Scott will allow.

Football-wise, the Waterhouses have the DirecTV NFL package to help them watch their beloved San Francisco 49ers. Work has taken them from the Bay Area to London (“That’s where we learned to drink good beer,” says Sue) and then to New York. The couple is hardly optimistic about the Niners’ chances. “It’s gonna be bad,” Scott says. 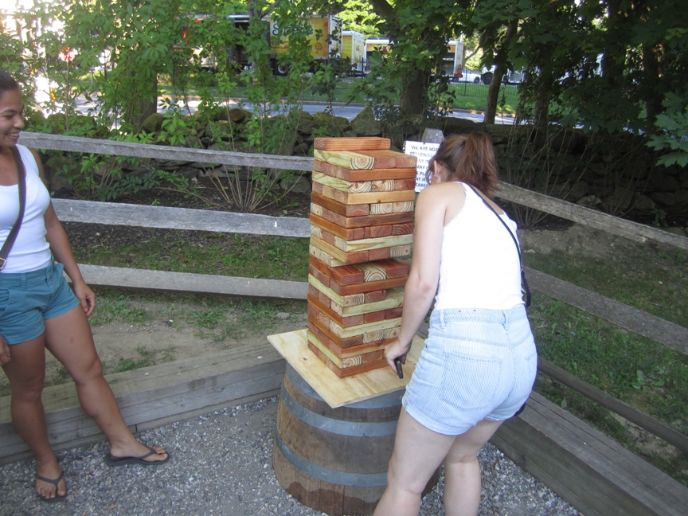 Out on the patio, a foursome, plus two dogs, enjoys a rigorous game of giant Jenga. Johnny Miller of Ossining says he built his own giant Jenga at home after seeing the prototype at Captain Lawrence. “I had scraps of 2 X 4s,” he says. “We drank Captain Lawrence while we built it.”

The dogs, Copper and Huck, enjoy a leisurely roll in the grass as Johnny’s wife Matilda waltzes about, tending to their baby.

“It’s a long weekend, and this just seemed like a nice place to bring the dogs,” says Bob Livolsi of Tarrytown. A cup of the Freshchester Pale Ale in hand, Bob is hoping for a solid Jets season. His honest assessment? “Awful,” he says with a shake of the head. “The quarterback got punched out!”

Despite playing 3,000 miles away, the Niners are popular in Elmsford today. Out on the patio, David Gater of Englewood, New Jersey has recently started rooting for the team, since his fellow Australian Jarryd Hayne, a rugby league star back in Oz, joined the San Francisco club. David isn’t surprised to see Hayne make a name for himself, including the viral clip of him leveling a Vikings defender. He mentions how, growing up in Australia, schoolboys invariably come back from recess bruised and bloody. “Then you put on motorcycle gear and tell him to run at this guy,” he says of Hayne’s NFL transformation.

David is enjoying brews and wings with Audrey Leczinsky, also of Englewood, and Rob Hayes of Manhattan. Rob has a confession. “I never liked beer,” he says. “My default has always been Bud.”

The Liquid Gold, however, may be changing his mind. It won over Audrey some time ago, when she found the Belgian-style ale at the barbecue joint Fette Sau in Brooklyn. “When they got rid of it, I was devastated,” she says. “Literally devastated.” 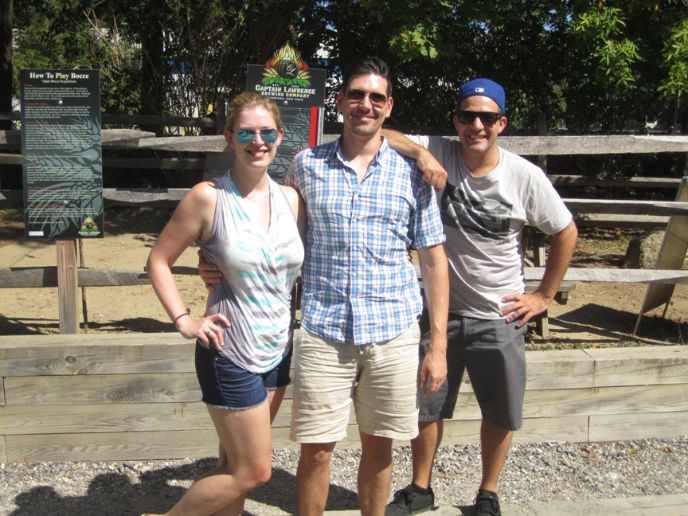 Not to worry, Audrey—Captain Lawrence has no plans to remove the Gold from its taps. And we hear it may be back at Fette Sau.

Audrey grew up in a Bills-mad family (“We had the Starter jackets and all,” she confesses), but is a more passive fan these days. Rob is looking forward to hockey season. “I couldn’t care less about football, but I destroy everyone in fantasy,” he says.

American rules football, as opposed to Aussie rules, is still somewhat confusing to David. But, beer in hand, he’s giving it a shot this season. “The more I watch it, the more I get it,” he says. “This could be the year I commit to it.”

Captain Lawrence Brewing, at 444 Saw Mill River Road in Elmsford, is open Wednesday through Friday, with weekend brewery tours on the hour, starting at 1. The author is paid by Captain Lawrence, partially in India Pale Ale.