People are reading
You are at:Home»Drinks»Cocktails»Hurricane Cocktail Recipes

I should rephrase: popular with tourists. A survey in the Times Picayune said that 95 percent of first-time tourists go there. I’m guilty of such my first time in NOLA, but not my second. I’m not sure if these guys are tourists, but they sure look like it. And this photo is hilarious. 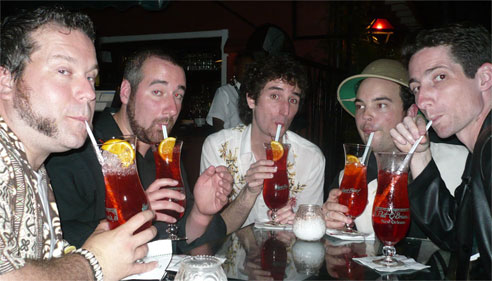 Legend has it (doesn’t legend always have it when it comes to cocktails?) that when Pat O’s opened just after prohibition, whiskey was very hard to come by. In order to get one bottle of whiskey, you had to buy an entire case of rum. So how to get rid of the rum? A house drink, naturally. Pat O’s drink was originally made with passion fruit syrup, which is a dull orange color, so who knows when or how it became the bright red color you see in the photos above. Pat O’s uses a mix today, and surely it has grenadine in it.

Pat O’s is also famous for introducing the Hurricane glass, named because it’s shaped like a hurricane lamp. (Speaking of hurricane lamps, does everyone have their candles and kerosene ready?)

There are other versions of the Hurricane’s history. (Aren’t there always other versions when it comes to cocktails?) In his book, “The Craft of the Cocktail,” Dale DeGroff writes that the drink was made famous by Pat O’Brien’s, but that according to Brian Rea, the author of Brian’s Booze Guide and The Modern Bartender’s Guide, the rum-based Hurricane first appeared at the 1939 World’s Fair in Queens — at the Hurricane Bar. DeGroff says the Hurricane cocktail recipe does not appear in the 1937 Famous Drinks of New Orleans by Stanley Clisby Arthur.

Rea also says there was another Hurricane version, this one made of cognac, absinthe and Polish vodka. Wikipedia also lists a version with coffee liqueur, Rum 151, Irish cream and Grand Marnier.

For our Hurricane (Irene), I’ll stick with the rum versions. I have four versions — all from actual books, not cobbled off the Internet: “Craft of the Cocktail” (which has the most ingredients), “American Bar,” “Mr. Boston’s Platinum Edition” and “The Ultimate A-to-Z Bar Guide,” which appears to have the simplest recipe.

Yes, I have quite the cocktail library. And quite the collection of booze, too. It won’t be a problem for me to make Hurricanes on the fly. But should you be needing Passion Fruit Syrup (almost all the recipes call for it), Torani makes it. Maybe you can get it at specialty stores? Or go online. (Or go crazy and make your own. Here’s a recipe from Epicurious.com.) If you want to use passion fruit juice (which is terrific in smoothies, by the way, and I have a nice rum-jalapeno drink you can make with it later), you’ll find it at Latin grocery stores under the name of maracuya, the Spanish word for passion fruit. Ceres makes it, too, and I’ve seen that at Whole Foods and other gourmet markets.

And PS: you don’t have to go out and buy hurricane glasses. A pint glass works just fine. And so does a big wine glass.

Looka.gumbopages.com
Robert Hess’ video on making a Hurricane.
Suite 101 recipe for a Hurricane.

The recipes, after the jump. Stay safe, everyone — and cheers.

This is the recipe I’ll use if I make this drink this weekend. Simple, straightfoward, to the point, with just a little sweetness. It’s very close to the original daiquiri recipe.

Shake with ice and strain into a cocktail glass.

Shake all ingredients with ice and strain into a hurricane glass filled with ice. Garnish with fresh tropical fruit. Variation: Try this drink by muddling a piece of orange, a piece of lime and a chunk of pineapple in the mixing glass with the lime ice and Galliano. Add the rest of the ingredients and shake.

This post originally appeared in 2011 and 2012 with the following introduction:

2012: Hurricane Sandy is already way worse than Irene, and so I do feel a little funny writing about something so frivolous as alcohol. But let’s face it, most everyone is only half joking that they’ve stocked up with enough wine to last a week. So, with that, I give you a repeat of a post I wrote last summer, pre-Irene:

2011: This might be a bit premature — and possibly in bad taste if Irene ends up doing a lot of damage — but in light of Hurricane Irene, which is barreling up the East Coast as I write this, I’ve had a couple of people ask me for a cocktail recipe for a Hurricane.