Flurry of Activity at the Brewery 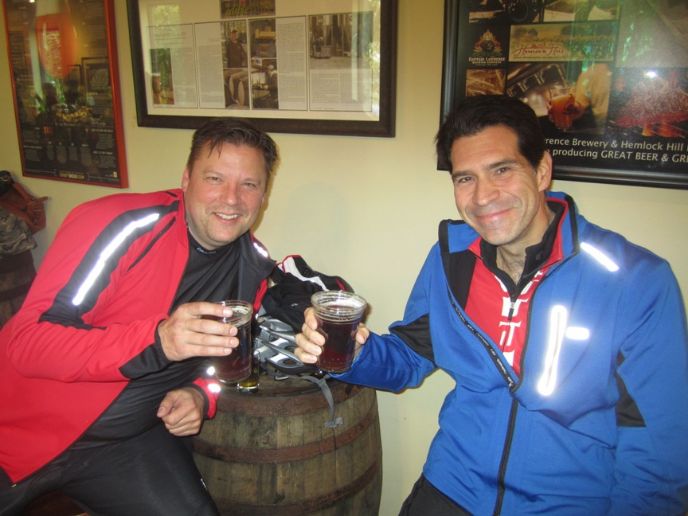 Ahh, the colors of October—brilliant reds and sparkling golds, and even a little white sprinkled in. Huh?

Indeed, that was a snow flurry or three illogically tumbling from a blue-gray sky Sunday afternoon. Yet the unseasonably cold weather did not stop some diehards from doing what they love to do on lazy weekend days—sampling beers on the Captain Lawrence patio, and partaking in bocce, cornhole and other “sports” that require but one hand.

Bill Watson of North White Plains and John Finney of Mahwah are friends from the University of Rochester, so a negligible bit of premature precip is nothing to them. “This is our weather,” says Bill. “We overheat in the summer.” 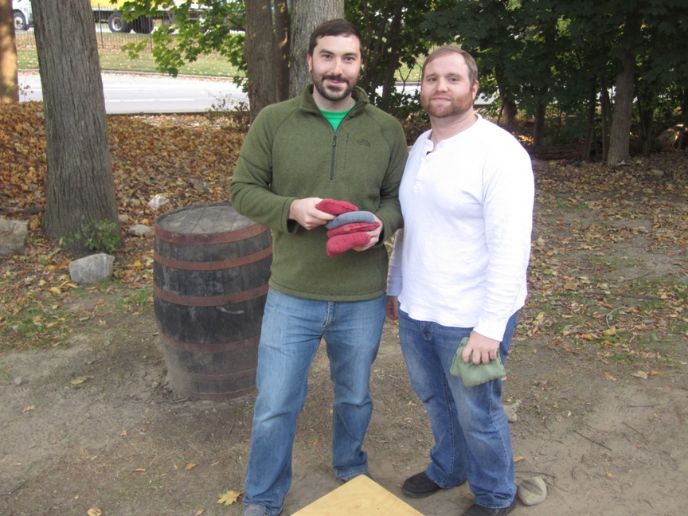 Both are enjoying a game of cornhole and the Captain’s Oktoberfest brew, a brownish marzen-style ale that calls to mind tents and beer maids and Munich. “Malty,” says John. “Clean flavors,” says Bill.

Both have sophisticated palates, and jointly brew beer, recently tapping their own pumpkin ale. “I think it’s better than Captain Lawrence’s,” says John, throwing down the challenge.

Across the patio, a heated—well, not literally—game of bocce is going down among a gaggle of pals from Mamaroneck. “It’s a beautiful day, we want to support a local business,” says Dan Whittlemore as he sips his Freshchester Pale Ale. “A couple of flakes,” he adds dismissively, referring not to his competition on the court but to the weather. “We’re a hardy bunch.” 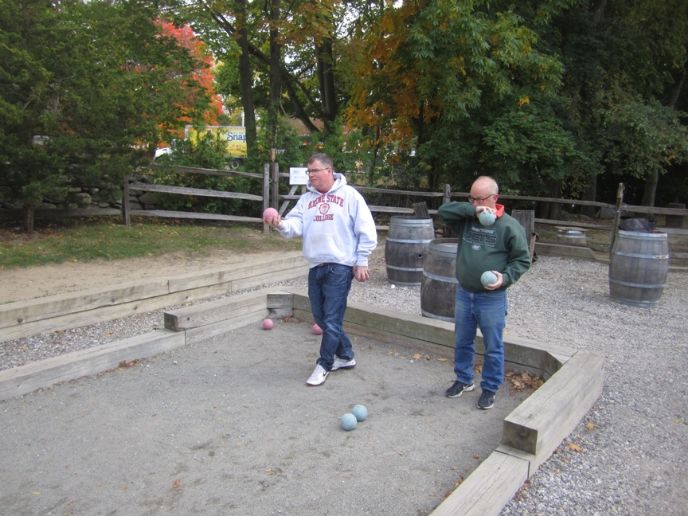 Dan’s sartorial style resembles others on the patio—sweatshirt over another shirt. In his case, it’s Jets green over Mets orange. He’s feeling good about both teams despite their history of tormenting fans. “You can’t not love what Daniel Murphy is doing,” he says of the Metsies’ second-sacker, “and the pitching is unbelievable.”

Dan’s gang finishes up the bocce battle and heads in for fresh samples. Dave Brown and Joanne Patterson of Putnam Valley make their way onto the court. He’s got the Liquid Gold while she’s got the Pumpkin Ale. It’s their first time at Captain Lawrence, making the trek south because their friends’ band, Red, White and Booze, is performing inside. Joanne is thinking what everyone on the patio–or at Kensico Dam, or at Rockefeller Preserve–is thinking: Winter comes quickly in the northeast, and tends to stick around for a while. Get out while you can. “It’s a little chilly,” Joanne says, “but we’re fortunate to have another weekend of being outside.” 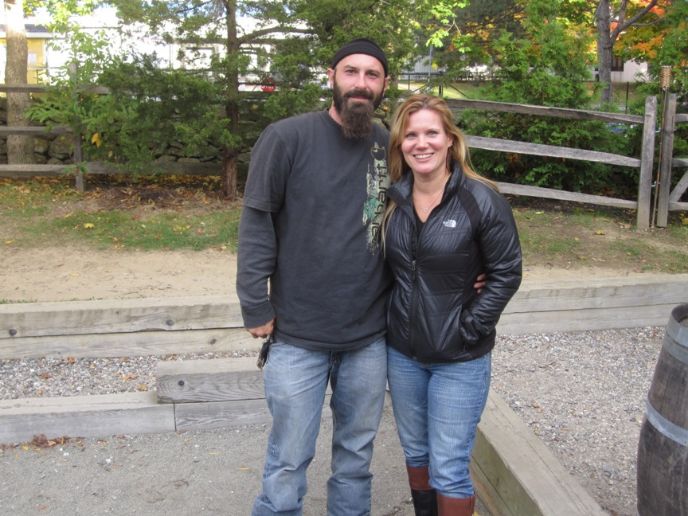 To be sure, with temps fighting their way above 40, inside the tasting room is where most of the action is going down. Red, White and Booze, a twosome, has the crowd grooving to some reggae-tinged tracks. Both guys are drummers by trade, says Andrew Fennell of Cortland Manor, but some days prefer to bring their guitars instead of their drum kits.

“It’s fun–we try not to make it like a job,” says bassist Andrew, sipping the Freshchester and noting how the duo feeds off having the CL crowd so close in the tasting room. 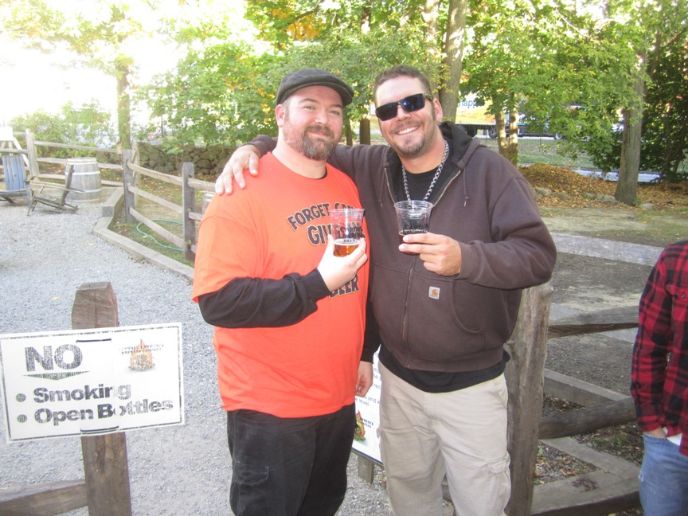 It’s their first gig at Captain Lawrence. “No matter where we play, we pick songs based on the crowd,” says singer/guitarist Corey Moeller of Croton on Hudson, sipping his Kolsch during a break.

Elsewhere in the tasting room, Greg Cashman and Hugh Babowal of Chappaqua unwind during a break in a 50-mile bike ride. “My daughter said, you’re not riding your bike in the snow,” says Greg, who of course was. “The weather is a little cooler than I’d like, but we knew we’d include some Captain Lawrence in the ride. Beer makes a bike ride better.”

Both are enjoying the Oktoberfest brew. “It’s got a warm feeling to it, it’s rich,” says Greg, while Hugh calls describes it as “malty, nutty, not as bitter as an IPA.”

Like Greg, Hugh is undaunted by the unseasonable cold and snow, and relishes their ride home. “Your fingertips and toes are cold,” he says. “Other than that, it’s OK. It’s a really good day and a gorgeous time of year.”