A Hearty Hello to Hallow’s Eve 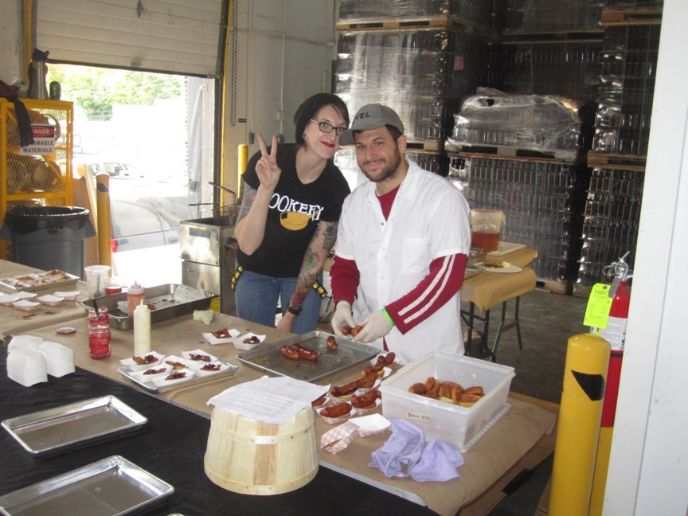 With all due respect to Christmas, Easter and that blessed bacchanalia of turkey, stuffing and pumpkin pie exactly a month away, Halloween may just be the holiday that is enjoyed as much by adults as it is by kids. We still get to dress up, go to parties, and enjoy a (witch’s) brew or two among other vampires and zombies and Minions.

It’s also a time of year for reflecting on fond Halloween memories. Celestine Cornu of Peekskill, Cindy Cunhua of Ossining and Nancy Lee of Tarrytown are doing so on the Captain Lawrence patio on a crystal-clear fall day. Celestine happily recalls a mermaid costume with a bubble-making backpack and a papier mache coral reef backdrop that was so bulky she could not enter doorways. The conversation gets slightly more sinister—a sister and her friend getting mugged in Peekskill while dressed as clowns, and losing some candy and a mother’s prized shoe. 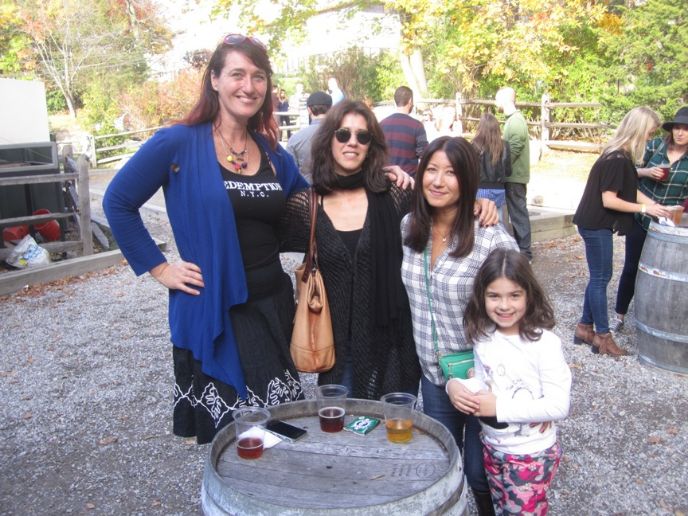 OK, it’s not all bushels of fun-size Snickers and jack-o-lanterns on unseasonably warm fall evenings.

Getting some air on the patio, she’s got the Kolsch, Celestine has the Pumpkin Ale and Cindy the Oktoberfest marzen. The most memorable dish of the day may have actually been a glass; Celestine is still raving about the pear cider. “So, so good,” she says. “I can’t wait till it’s out.” 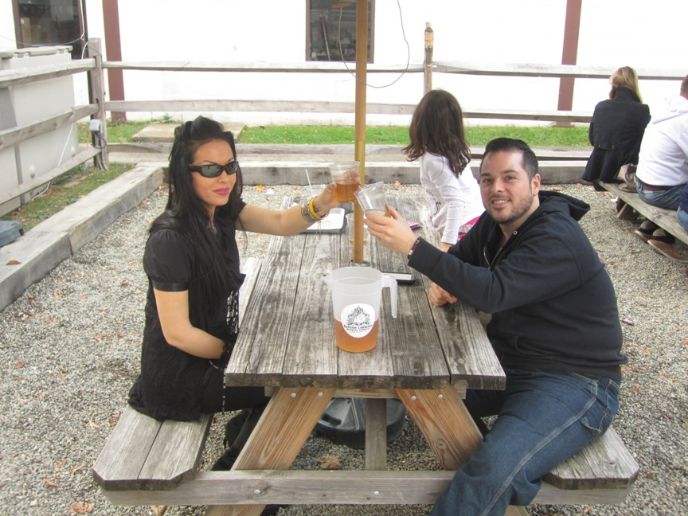 Natalie would’ve liked more non-meat options in the smorgasbord (alas, even the striped bass was wrapped in bacon, she notes), but is raving about the pizza, while Dean dug the short ribs bathed in duck fat. They’re sipping the Somewhat Seasonal berlinerweiss brew, a collaboration between Captain Lawrence and Great South Bay Brewery that is livened up with local smoked acorn squash and roasted butternut squash for what Natalie calls a “sourdough tartness.”

Dean refers to Natalie as “Miss Halloween” for her passion for Hallow’s Eve. The pair dressed up as a couple from the horror TV series Penny Dreadful a few days earlier. Dean’s fondest Halloween memory may just be a costume party at the Playboy Mansion years ago (he was an “evil gynecologist”), while Natalie’s was dressing up as Carrie, a bucket of fake blood in tow. No wonder the two get along. 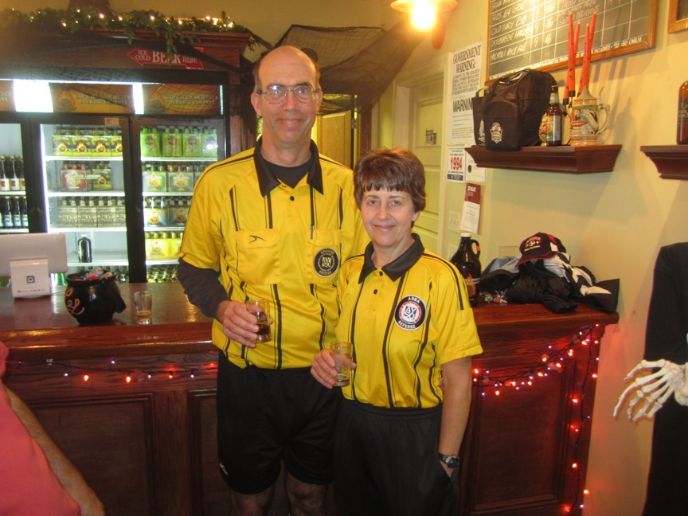 Inside the brewery, Kathy and Bill Brown of Pleasantville are already sporting their costumes. They’re dressed as a pair of soccer referees, because they actually are—having just officiated for the under 10s.

“Our growler is empty,” says Bill. “You can’t go into Monday with an empty growler.”

Kathy likes the Liquid Gold, while Bill sticks with the seasonal Oktoberfest. “Good fall flavors,” he says of the malty, 5% alcohol, German-style brew.

Kathy referees for a couple reasons—to empower kids to be team players, and to have them see a woman in a referee role. “Hopefully we’re enabling kids to have a good experience,” she says. 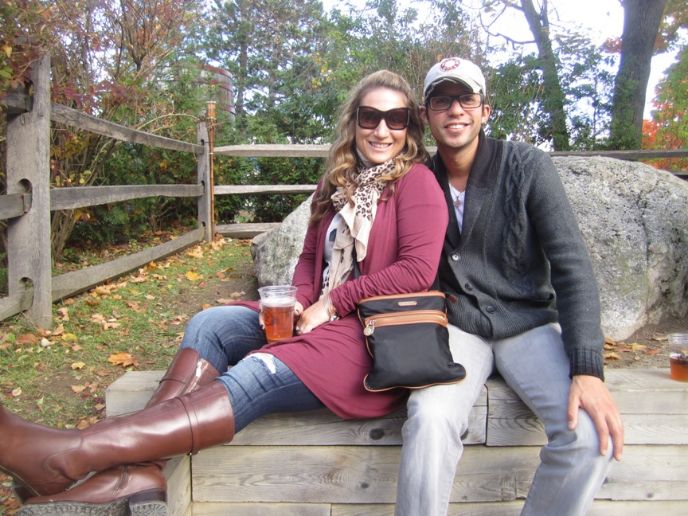 Back on the patio, Eddie and Tinamarie Vega of the Bronx are having their own good experience, sitting peaceably along the stone wall, watching bocce and enjoying a couple craft beer samples in the crisp air. “We were happy to have a few free hours on the way home from Bear Mountain,” says Eddie, a firefighter.

He’s got the Effortless IPA, and she has the Hop Commander. “I like IPAs, hoppy beers,” says Tinamarie.

The pair is ready for Halloween—she’ll be Catwoman and he’ll be Batman. Not just any Batman, but “1966, Adam West Batman,” says Eddie. (“Holy detail, Batman!” as Robin might’ve said.)

After a few recent Halloween snowstorms, hopefully the weather will cooperate on Oct. 31 the way it is today. Says Eddie, “It’s just a beautiful day to be outside.” 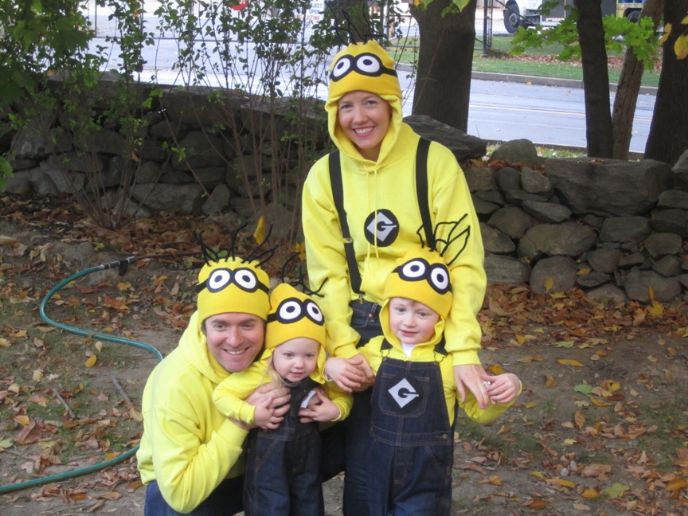