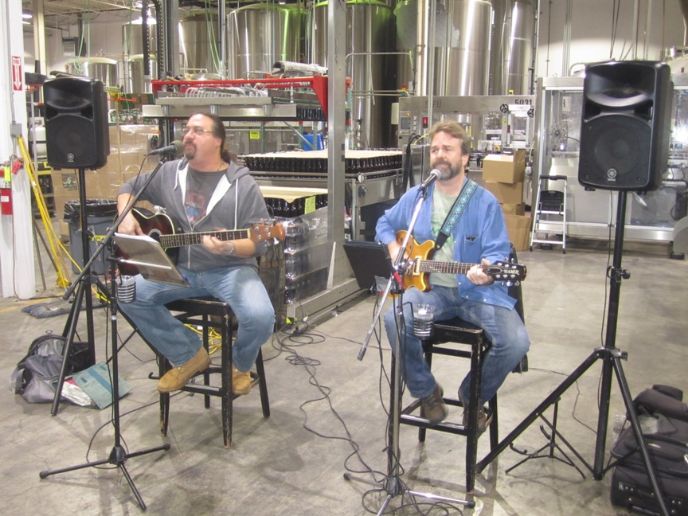 It’s a gorgeous late-fall day, just warm enough to consume a draft or two on the patio, yet everyone has opted to stay indoors. In fact, it’s the first day the Captain Lawrence indoor beer garden—oxymoron intended—is open, with the brewery space itself full of tables, upright barrels, live music, nosh and beer, and even a little cornhole.

The pair went to see the latest Hunger Games, and figured they’d extend a fun afternoon. “We had extra chips from the last time we were here,” says Dominic. “I brought them along, just in case.” 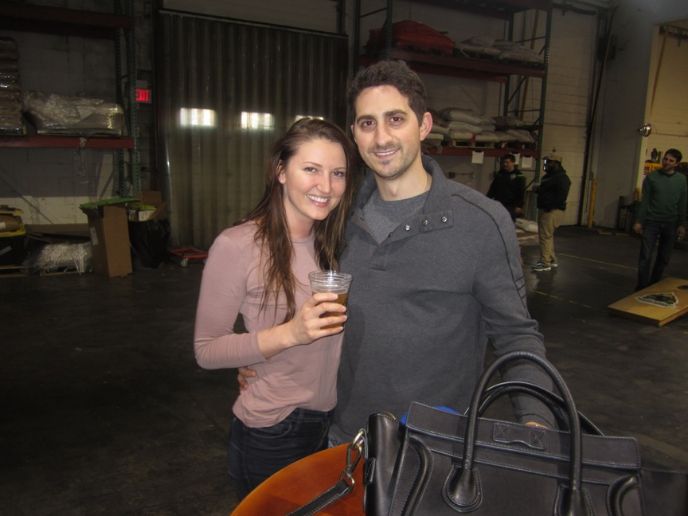 Good thinking, Dominic. Anastasia has the Liquid Gold, while Dominic is sipping a black lager called The Smoothness from Denver’s Great Divide Brewing. That’s one of the “Jameson 5”—it’s not a Celtic Jackson 5 cover band, but five Jameson Whiskey barrel-aged beers from around the country, which includes the Captain’s own Trans-Atlantic Red.

Imbibing at another barrel in the expansive brewery, K.C. Craig and Shane Thompson are visiting for the first time. K.C.’s brother is a coach for the Sioux Falls Skyforce basketball team, which recently tackled the Westchester Knicks in a D-League matchup. So K.C. and Shane came down from their Somerville, Massachusetts home for the White Plains game, which the Knicks won. “We’ll go get ‘em in Erie, Pennsylvania tonight,” says K.C. 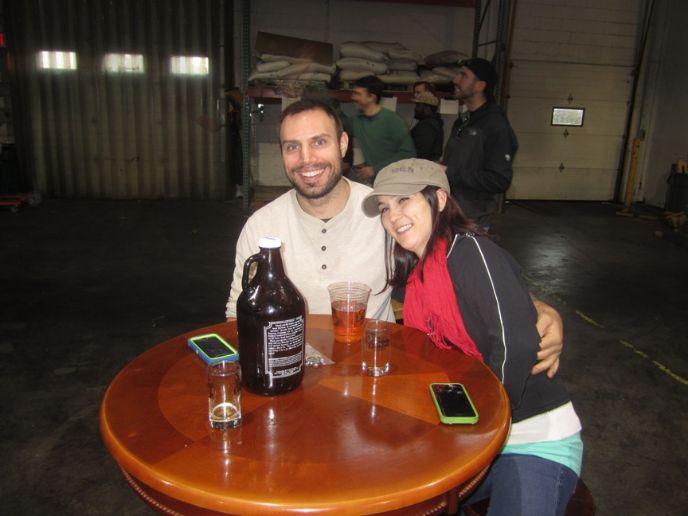 She fell in love with the Liquid Gold last time the couple was in New York, and was elated to find out that Captain Lawrence is just up the road from White Plains. “We’re just beer people,” says Shane. “Soon as we walked in, K.C. said, I could spend a Saturday here.”

And so they are.

And then there are longtime visitors of the Captain, dating back to its Pleasantville days. Such as Steve and Sue Moore of Pleasantville. Steve’s got the small-batch Cold Toddy, a toasty, smoky ESB with–like the Westchester Knicks–some hops to it. Sue has the Palate Shifter imperial IPA, but is holding out for another brew—one to match her Frost Monster imperial stout t shirt. “I keep asking them when it’s coming,” she says. [Editor’s Note: Wednesday!] 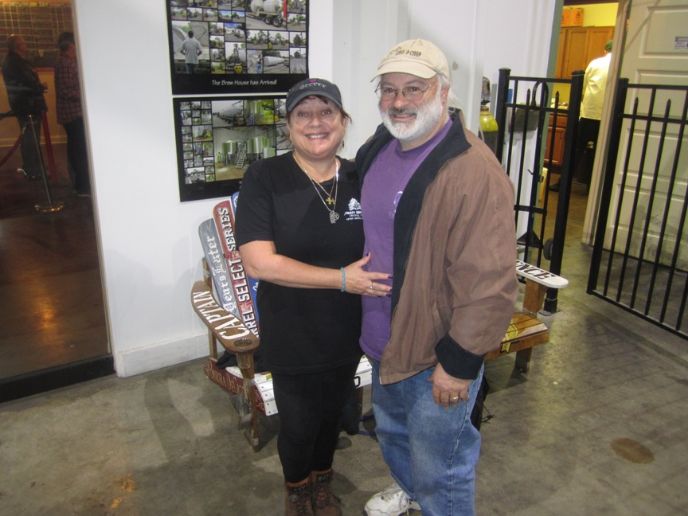 The two came from the Blueline Tactical shooting range, which sits on the opposite end of 444 Saw Mill River Road from the brewery. “It’s like a sporting event,” says Steve, who shot an AR-15 “modern sporting rifle,” he says. “You play some football, you go for a beer after.”

Sue says shooting, then sampling—that order is important–go together well. “Anything you do that ends up here is a good thing,” she says. 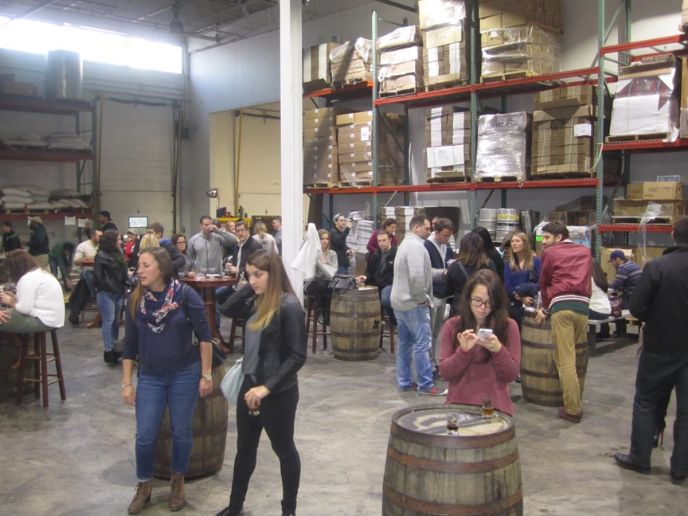 A guitar duo cranks out beer-friendly music. The Gleason’s guys crank out the pizzas. Three opportunistic young men slide their barrel adjacent to that of three surprised young women and introduce themselves. The cornhole bags thwack against the boards, and every so often a failed attempt in giant Jenga resounds around the brewery space.

Sarah Hettinger of White Plains, Victoria Marciano of Orange County and Mike Sunagawa of Ossining gather ‘round the Jenga tower. Sarah says a half dozen friends all surprised each other by turning up at Captain Lawrence on this particular day. “All these separate entities came at the same time,” she says. “It was like we felt each other’s energy.”

Victoria isn’t having it. “Just say it was her idea,” she says. 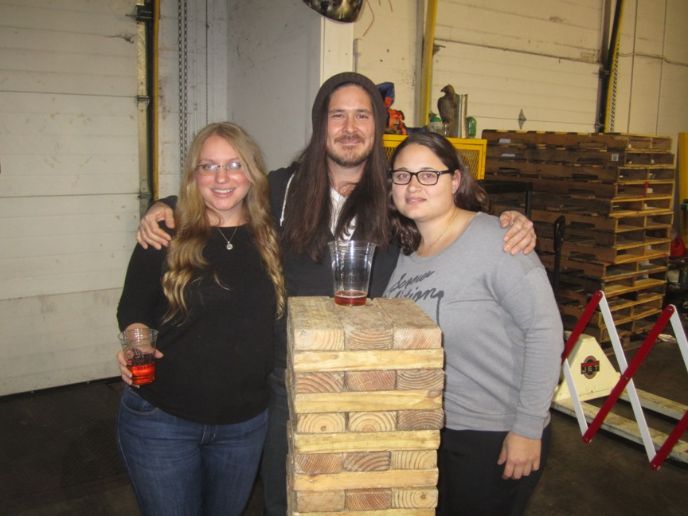 Sarah says the brewery is a favorable option to the White Plains bars. “It’s come as you are, and enjoy wonderfully brewed beer, good food and good people,” she believes. “I roll out of bed, put makeup on my face, and get to know new people.”

Sarah is enjoying those quirky Jameson’s-aged brews. Victoria has the Kolsch and Mike the Hop Commander. With Thanksgiving just days away, it’s an opportunity for everyone to note what they’re thankful for. Friends, says Victoria. “Just life,” says Mike. “That’s it.”

Sarah ponders it for a moment. “Good beer,” she says. “And Jenga.”