The Captain’s Log: It’s Not Good to Keep Things Bottled Up 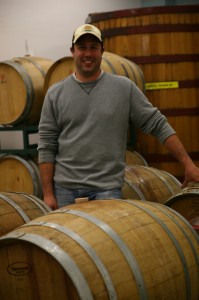 It’s the time of year for sharing, and Captain Lawrence tasting room denizens will be doing just that on Dec. 13, when the brewery hosts its first-ever indoor bottle share, coinciding with the release of a couple beloved sour ales. The concept of the bottle share is simple—bring a bottle of something you’ve been saving for a special occasion, share it with friends and strangers, and get a taste of the something special they’ve brought along.

Captain Lawrence hosted an informal bottle share in the parking lot of its old Pleasantville spot many years ago, but this is the first time it’s going on inside, and in Elmsford. There’ll be victuals and live music, and owner Scott Vaccaro is breaking out the Hops N’ Roses and the Hudson Valley Harvest Raspberry Sour. “We’ve been sitting on this for a year and waiting for the right moment,” he says of the funky raspberry brew. “This will be exciting.”

With the extra space in the Fermento Funk Facility, Scott is planning to release a new sour roughly every month; look for the Barrel Select Gold in January. “They tend to tell you when they’re ready, but there should be enough in the pipeline to do it pretty much every month,” he says.

Treasured as they are by the aficionados, the sours aren’t for everyone. But this genre-bending brew might be: The Meltwater IPL. That’s right, an India Pale Lager. It features a Czech pilsner yeast strain and a good amount of hops. “It’s a lager first and foremost, and it’s aggressively hopped and dry hopped for a big flavor and big aroma,” says Scott.

The Meltwater, named for an ultra-pure form of natural water, had a test run at the New York Renaissance Faire, and gets the proper six-pack treatment now.

The perennial favorite Winter Ale, a malty and rich alt beer flavored with a touch of cardamom and other warming spices, is also out in bottles. And another big winter flavor—the Frost Monster imperial stout—is available in two iterations: the barrel-aged one sold in a corked and caged bottle, and the unbarrelled version available in four-packs. The weather has been mild, but we know the frigid temps are lurking. “This is the time of year where you look for something big and strong and dark,” says Scott.

Scott continues to share the Captain Lawrence goodness with a broader swath of the East Coast. A select number of good-beer bars and shops in Massachusetts have been introducing a new Captain Lawrence beer each month, with the Hop Commander IPA, Effortless IPA and Palate Shifter imperial IPA making their way north. The rest of the beer-menu mainstays hit greater Boston in the coming months.

Ten years ago, when Scott was tackling Westchester one town, and one bar, at a time, multi-state expansion seemed like a pipe dream. He’ll mark a decade in the beer biz with a special Ten Years Later brew. “It’s gonna be a big beer,” he says. “Keep an eye out for that.”

It was early January 2006 that Scott schlepped a keg of Freshchester Pale Ale to Lucy’s in Pleasantville—the first of around 1,200 kegs in year one. That will be about 50,000 this coming year.

“It’s insane to think it’s been ten years of beer,” says Scott. “I can’t wait for the next ten.”