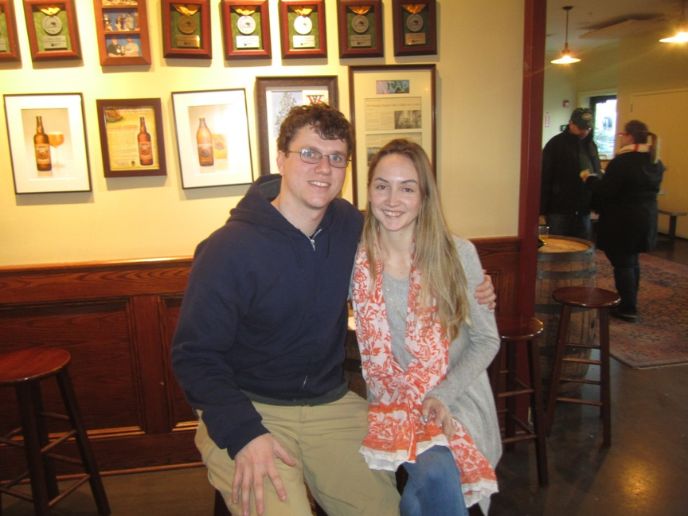 It is that first week of January, when the new year’s resolutions are either intact, or have not yet been finalized; either way, they haven’t been broken. Of all the resolutions bandied about in the tasting room, Kait Saltzer of Blackwood, New Jersey has perhaps the most interesting—and certainly the most jarring.

“My goal is to drop someone,” says the lithe lady with a sly smile.

Indeed, Kait is a huge fan of ultimate fighting, and will embark on a rigorous MMA training regiment with that resolute goal of, well, knocking a foe flat.

Kait and Eric Jones made the trip from southern Jersey as part of their #NorthAmericanBrewTour, spending the night in Bear Mountain, hiking a bit, popping into Peekskill Brewery, and wending their way down the Taconic to Captain Lawrence. They learned of the Captain at the Glassboro Craft Beer Festival in October.

“It was either No. 1 or No. 2,” says Eric of his favorite craft brewer that day. “And the other one was Stone Brewing.”

He quaffs the Palate Shifter Imperial IPA and she’s got the Hopsomniac, a coffee-flavored india pale ale. Eric’s resolution is to “leave the continent” in 2016; he’s looking at Europe or South America, with a keen interest in Brazil. Perhaps Kait can learn a little jiu-jitsu while they’re there. 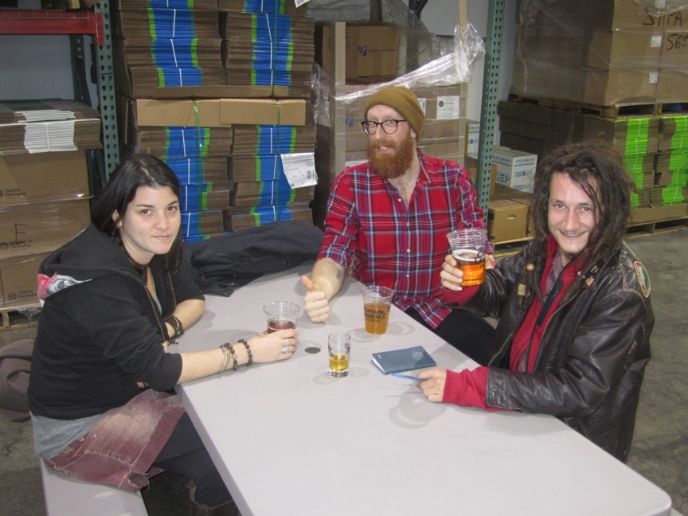 It’s the first truly cold day of winter, and the indoor beer garden has a decent crowd. For Justin Pucila, beers at the Captain is a tradition dating back to when it was in Pleasantville, and he was in Pound Ridge. Now that he and Jesse Gayle live in Santa Fe, New Mexico, it’s a little harder to get back to their favorite brewery. “Pretty much any time I’m home, I make every effort to be here as much as is physically possible,” says Jesse.

Jesse loves “the brewing life,” she says, working at Second Street Brewing in New Mexico. She sips the Rye IPA and Justin the Liquid Gold. “It always has a home on my palate,” he says of the Belgian-style brew.

Their pal Scott Wood of Pleasantville has tried every mainstay beer in the lineup, and opts for the experimental batches instead. In this case, it’s the Appleweiss, a tart Berliner wheat. “I’m a fan of the sour stuff,” says Scott. “They’re stronger and just different.”

Scott’s resolution is “to not have one.” Justin vows to “keep on it” with the goals he carried into the new year, while Jesse’s has a more tangible, earthy quality: “I’m saving money to buy a farm in upstate New York,” she says, to grow medicinal herbs and make some kick-ass tea.

It is indeed a day for bringing out of town guests to the brewery; for Kait Keller of Pearl River, that means hauling Boston-based Mugsy Undemir in for some of New York’s finest craft brew. Mugsy digs the hoppy, citrusy “295” IPA: “Your good, go-to IPA,” she says. “Not too bitter—an IPA for people who don’t drink too many of them.”

On this brisk January day, Kait chose the Captain for its homey vibe. “Everyone’s a friend here, almost like family,” she says. Speaking of family, she sips the Sisters Coffee Porter, created by Scott Vaccaro’s siblings, including sister Jill. “It’s a good breakfast beer with a nice coffee flavor,” Kait notes.

Mugsy’s resolution resembles Justin’s across the room—simply “push it” in terms of the previous year’s plans. Kait vows to “get settled”, which includes lining up her own home. 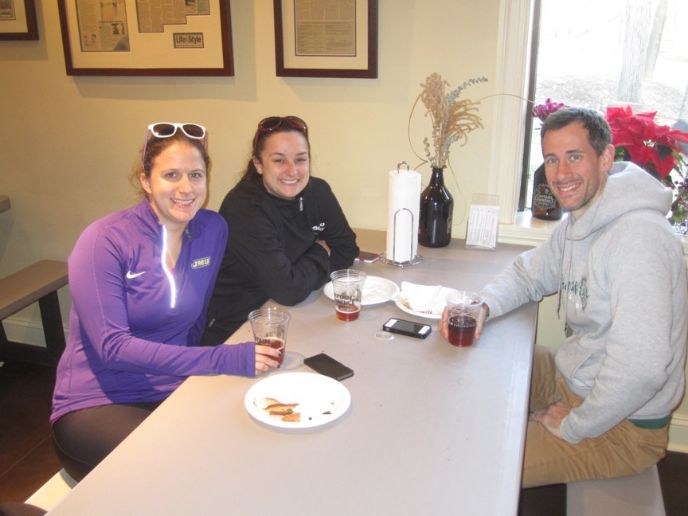 Back in the tasting room, Kirstin Drucker and R.W. Carneal of Harrisonburg, Virginia enjoy a few samples with Liz Colello of Somers. They hiked up Anthony’s Nose, as the Hudson River-adjacent mountain trail in northern Westchester is known, before venturing on to Elmsford for lunch and craft beer. The Virginians discovered Captain Lawrence recently after Liz’s husband bought a case of the Frost Monster imperial stout a few weeks back. “He’s nuts,” Liz says. “And they’re gone.” (To be fair, he gave some of the 11% monster brew bottles away as gifts.)

Liz has the Freshchester Pale Ale, the beer that got it all started a decade ago, while Kirstin and R.W. enjoy the amber Kolsch known as Salvation. None has spent much time thinking about resolutions, but after espousing on the muscle-relaxing qualities of beer, Kirstin stumbles upon one.

“Beer tastes better when you work for it,” she says. “From here on out, beer after exercise!”