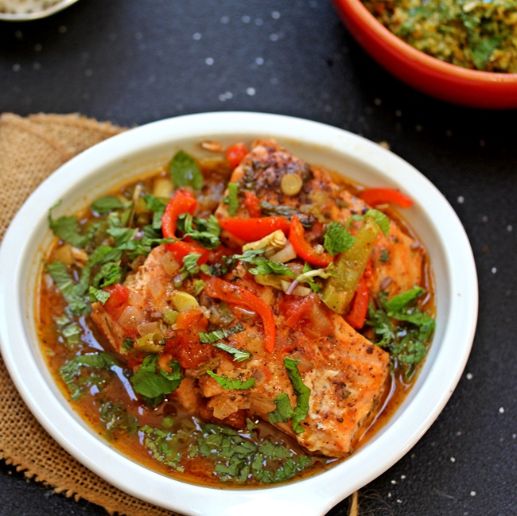 We love fish in our household, it is a healthy and quick cooking protein and in my opinion very versatile. This time of the year I always try to dig up a few fish recipes keeping the Lenten meals in mind.

I had made this recipe a couple of weeks ago, and tried it in a tagine ( a traditional clay cooking pot, with a chimney like lid), yesterday I tried this again relegating the slow cooking part of it to a slow cooker. I was thrilled with the results and think it might me time to share the recipe with you. A tagine is a style of cooking, but also features some flavors such as preserved lemon, cumin and paprika. Such a dish is often served over rice or couscous and can be accompanied by a condiment called chermoula which is a herb based pesto of sorts mostly a combination of herbs, garlic and olive oil. I did not have preserved lemons, but made a generous quantity of chermoula, which I used today for grilling chicken. We will save that recipe for another day. 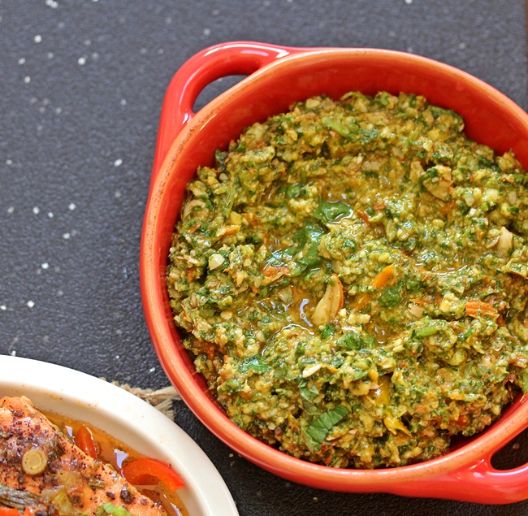 My version used almonds, I used skin on almonds which I had soaked in water overnight. The results were quite delightful. I ended up with unexpected company who were quite impressed by what they thought was a very fancy meal.

Actually, there are many ways to use a slow cooker, and using it to finish of a well seasoned fish or chicken dish may not quite be the fix or forget variety, but it actually does a very good job of keeping things moist, and ready for a meal. After all, some days that is really all that you need. I have through trial and error found this is a great method for working with fish when you are expecting company, it guarantees that perfect moist consistency. There is just one caveat, you will need to use a fish that is dense and meaty such as salmon or tuna.

A beautiful salmon tagine, that gets done with very little hands on cooking time.

For the Almond Chermoula
For the salmon tagine