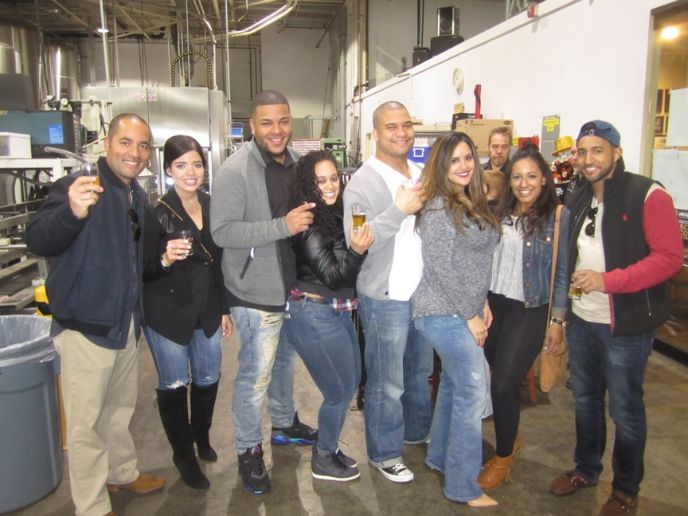 Dave works for Goose Island, and was representing the brewery at an event at Ommegang in Cooperstown. He first encountered Captain Lawrence seven or eight years ago, it was the Golden Delicious tripel ale at a brewery event in Indiana. He’s been itching to visit the Captain ever since.

“I’m trying to stop at places that I like along the way,” he says. “This is one of them.” 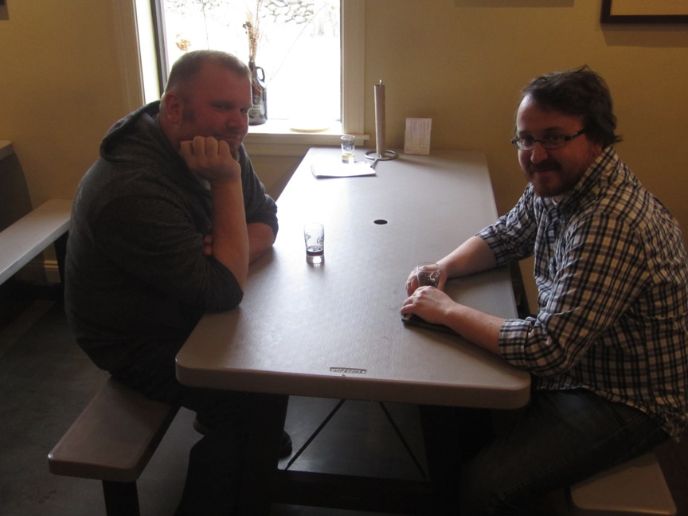 Dave is trying some of the small-batch beers, such as the Midnight Monkey, a funky American wild ale, and the Mass Pike, a hoppy, rich and malty India brown ale, but skipping the Seeking Alpha triple IPA. “I don’t want to melt my teeth,” he says. (In fact, four out of five dentists say the Seeking Alpha is safe for teeth, and good for one’s mental health.)

Kevin, meanwhile, is enjoying the Czechmate Pilsner and a free couple hours. “My wife is up the street at a bridal shower,” he says. “This is definitely a great way to spend an afternoon.” 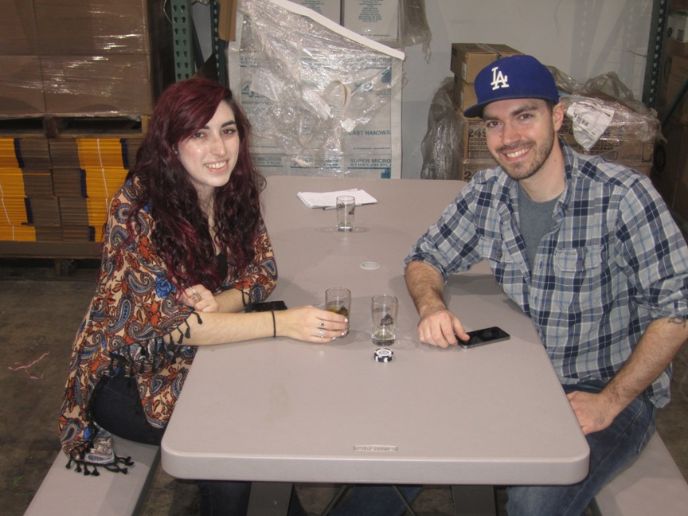 Same goes for Jimmy Walter of Lynbrook, Long Island and Melissa Ehrich of White Plains. “It was nice outside, so we came to play bocce,” she says.

Their game over—Jimmy won, if you’re scoring at home—the pair retired to the indoor beer garden, where Mark Sinnis and his brooding band “825” strikes its usual Sunday pose. Jimmy’s got the Czechmate, while Melissa sips the Gose Before Bros. “Lighter, crisp and fruity,” she says.

Jimmy sports a Dodgers hat; he picks up a cap every time he visits a new major league ballpark. He was watching a Yankees spring training game on TV before they ventured to the brewery, counting the days until Opening Day. “It looks so nice in Florida,” he says. 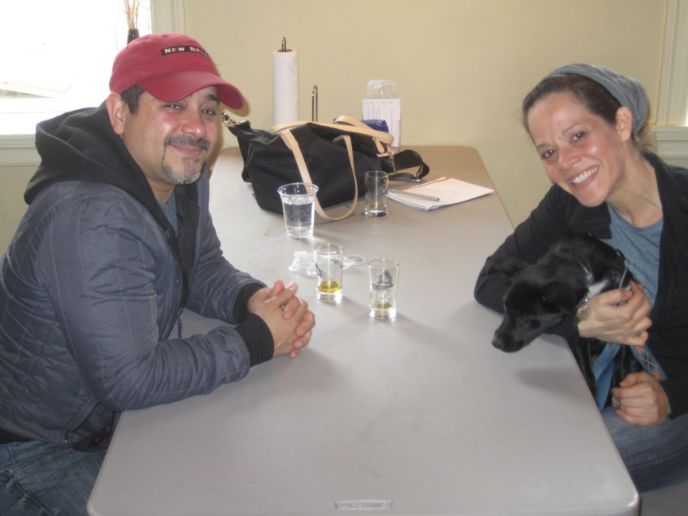 It doesn’t look bad in Elmsford either, if a bit overcast. Green Day plays on the house system, and green shoots appear in the beer garden. Diana Gonzalez of Port Chester and Angel Rosario of Yonkers are sipping brews while getting Diana’s painfully cute puppy, a four-month old border collie-chihuahua mix, used to social situations.

“It was love at first sight,” she says. “I saw his picture and fell in love.”

The dog’s name was something of a no-brainer for the couple: Barley. “We’re big on beer,” says Angel.

“I like malty beers,” says Diana. “He likes hoppy beers.” 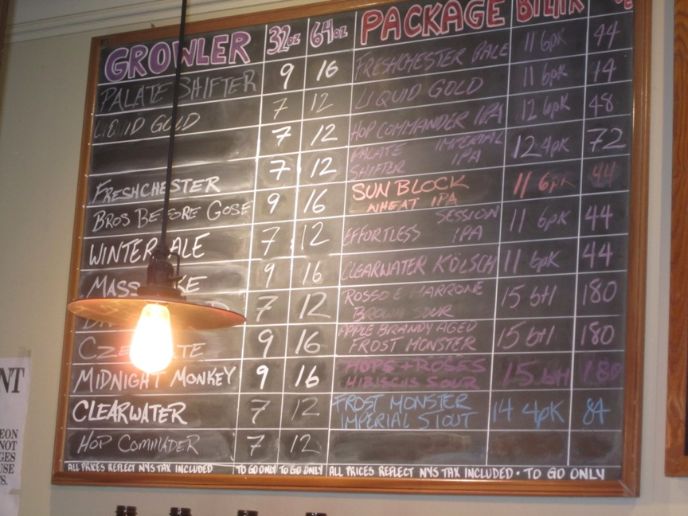 She’s got the Brown Bird brown ale, and he’s got the Hop Commander IPA. “It’s not too hoppy—I love the bitterness,” he says.

The one brew they can agree on, adds Angel, is stout.

Elsewhere in the brewery, Raul Aristy, a Yonkers firefighter, is celebrating his 35th birthday with a gaggle of pals. “My wife knows I love to drink beer, so she brought me here. I love the live band, I love the triple IPA,” says Raul, showing no signs of tooth meltage. 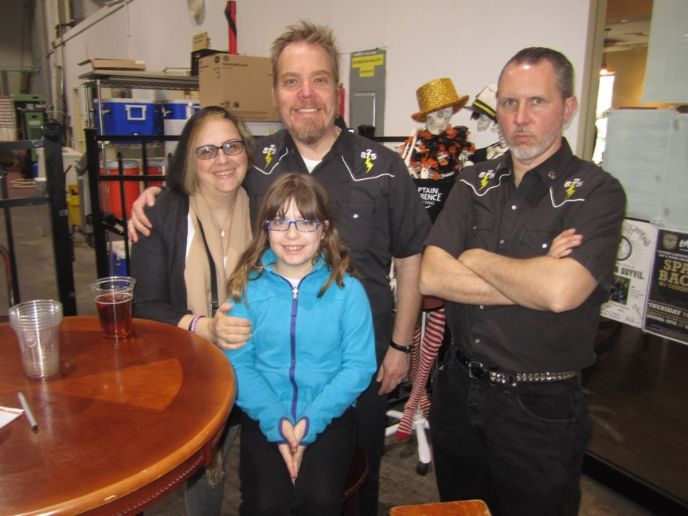 Sinnis’s black-clad band takes a well-earned break, some of the guys headed to the bar. Trumpeter Lee Compton returns to his wife, Marina Stenos of Peekskill, with a cup of Freshchester Pale Ale and a smile. With an 8-piece band, they’re usually crammed tightly together onstage, he says. Space is not a problem in the brewery. “Acoustically, it’s cavernous,” Lee says of the high ceilings. “But I can get my arms out here—it’s not claustrophobic, and the crowd is great.”

Meanwhile, new pals Kevin McGann and Dave Tohtz are sampling a few more entries in the CL lineup, and enjoying some lively banter on their first trip to the Captain. “The mark of a good brewery,” says Dave, “is the conversations you have.”